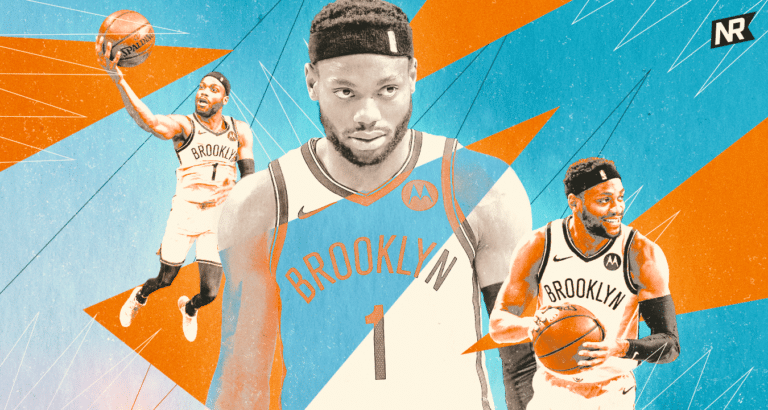 The Brooklyn Nets have been the talk of the league after their blockbuster trade last month which landed them NBA superstar James Harden. A team highlighted by Kevin Durant, James Harden, and Kyrie Irving is certainly going to see a lot of SportsCenter Top 10 highlights, media coverage, but most of all, lofty expectations. But while the superstar names attract all the buzz and attention, every championship team needs a few workhorses. Guys who are gritty, show hustle, and impact the game beyond the numbers shown in the stat sheet. Enter Bruce Brown, arguably the Nets most valuable defender.

Brown, a former second-round pick of the Detroit Pistons (42nd overall in 2018) was acquired in an offseason trade that sent former Net Dzanan Musa and a second-round pick to Detroit. Many Nets fans were uncertain what they would be getting in Brown, but he has instantly become a plug-in rotation player seeing meaningful minutes, as well as a fan favorite.

Why Is Bruce Brown A Fan Favorite?

Why does Brown deserve recognition on such a star-studded team? He is the glue that holds together the core of the team. His impact on the team won’t always show up in the stat sheet. Don’t expect absurd scoring outings from Brown but expect all the intangibles that you can’t teach even the most talented players in the league.

The overall energy of the team seems to rejuvenate once the burly guard is inserted into the game, whether that be in a starting role or playing meaningful minutes off the bench.

Bruce Brown is only 6’4 but he plays like a man of much greater size and strength. His ability to crash the boards, both offensively and defensively, allows his team to get extra possessions and recompensate for mistakes.

His lateral quickness is admired by the Nets coaching staff, who seem to have plenty of trust in Brown. Don’t believe me? Let’s look back at the final possession of the Martin Luther King Jr. Day matchup against the Milwaukee Bucks. A thrilling nail-biter that came down to one final shot from Milwaukee to potentially win the game. That last shot was attempted by All-Star Khris Middleton and was contested by Kevin Dur… Nope, it was contested by Bruce Brown.

Brown has received respect and positive praise from his superstar teammates. After an impressive victory against the Nuggets on January 12th, Kevin Durant raved about his hard-nosed teammate, saying “Bruce Brown was incredible tonight, jeez. Hitting floaters, guarding full court. So proud of that guy. True professional.”

Most recently, it was James Harden who had high praise and admiration for Brown following a career-high 29-point outing while shooting a very efficient 11/13 in a tight contest against the Kings.

“He does it all… He works his butt off… I’m proud of him.” Harden proclaimed.

Offensively, Brown’s repertoire isn’t very diverse. It consists of short floaters, transition finishes, and hard takes to the basket, mainly as the receiver through pick and rolls. His three-point shot is a work in progress, and you will almost never see him attempt a mid-range jump shot. Most of his easy looks are a product of the gravitation and attention the Nets big three commands simply because one defender is not enough to contain the offensive firepower and three-level scoring of each member of Brooklyn’s “Scary Hours.”

Offense isn’t why the Nets swung a deal with the Pistons to acquire Brown though, their big three will put up more than enough points to win them games. What they need is perimeter defense and energy plays, Brown provides both and does so on a nightly basis. He’s a pesky on-ball defender and simply put, he understands his role and never tries to do too much.

Bruce Brown’s nightly minutes certainly lack any form of consistency. Some nights he will play 25 minutes and other nights he’ll see minutes in the low teens. One thing that is consistent though is his jubilant attitude and effort. Brown plays as if he’s the last man on the end of the bench who is in danger of losing his roster spot.

An interesting aspect of Brown is that his success is directly correlated to the Nets success. The Nets are 12-4 when Brown starts and 7-1 when he scores in double figures.

What Brown brings to the Nets can be compared to what Andre Iguodala brought to the Warriors during their championship seasons. When people think of the incredible Warriors team that won the championship in 2015 (followed by back-to-back championships in 2017 and 2018), they think of Stephen Curry, Klay Thompson, and Draymond Green.

However, it was Iguodala that won Finals MVP with his stellar defense on LeBron James during the finals. This isn’t saying that Brown is the next Andre Iguodala or will be of his caliber anytime in the future, but in terms of the presence each brings to their respective contending team, they draw many similarities.

You notice Brown’s impact not only with his energized play but with his confidence and body language as well. After nailing consecutive threes to seal the victory against the Kings on Tuesday, Brown turned to the Kings bench and shimmied with a smile on his face, igniting the Nets bench who jumped out of their seats in celebratory joy for their courageous teammate.

It was a moment that had Nets fans screaming at their tv’s in delight and would have had over 17,000 fans charged up and roaring had there been a sold-out crowd in attendance.

The Nets defense has always been a hot topic this season, more so in a negative manner, but Brown is reinventing the culture and effort level on that end of the floor. Brooklyn’s defense may consistently leave the front door open for opponents to walk in, but they have a bulldog waiting at that front door, that bulldog goes by the name of Bruce Brown. Trespassers be warned.