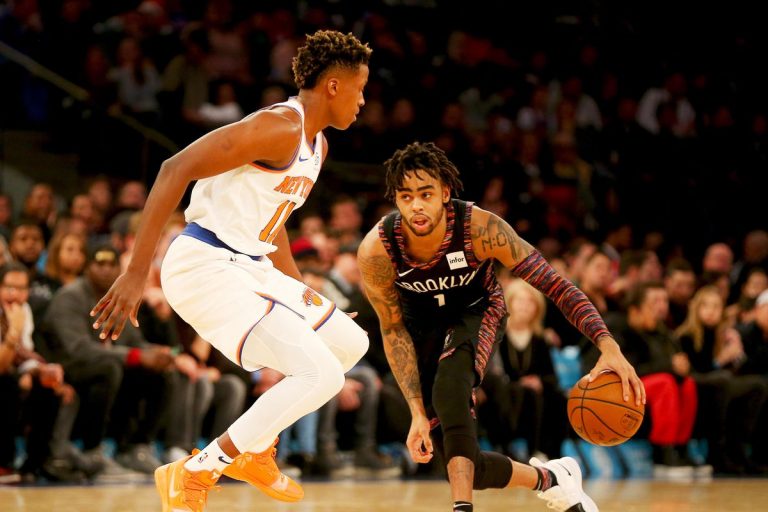 The NBA season is moving so, so quickly at this point as we enter the ninth week of Brooklyn Nets basketball. Can you believe it?

The Nets sit at 10-18 so far, a tough start for a team that had their eyes on that eighth seed before an injury sidelined Caris LeVert. But keep your eyes focused on the future — Brooklyn plays three games this week, and some of them are winnable!

As I do every week, I talked to some of the people who know more about these upcoming games than anyone else: the writers who cover them. For the 76ers game, I talked to Adam Aaronson from Liberty Ballers. For the Wizards, I’m welcoming back Nate Wolf, who covers the team for BBall Index. And for the Hawks game, I have Justin Hodges, site leader at Atlanta Sports HQ. Let’s see what they had to say.

Jimmy Butler seems to have really found his stride as a member of the Sixers, and he posted back-to-back 38 point games. Do you see the Embiid/Butler/Simmons trio as the kind of Big Three that anchor a championship core?

In my eyes, the Embiid-Butler-Simmons trio will absolutely be one that is capable of spearheading a championship team. Butler is a perennial All-Star with a tremendous two-way skillset, Simmons is on his way to being able to credibly make the same claims, and Embiid is a dominating force who has progressed at a nearly unprecedented rate. However, what gives me pause is the ineptitude that the Sixers have shown to properly surround their stars in recent years. The Sixers have zero players outside of their trio of stars who have provided positive overall impact this season. While there is a good argument to be made that the Sixers have a better roster from one to three than anyone in the league other than Golden State, their roster from four on down is one of the worst in basketball, and is definitely the worst among contending teams. And considering the Sixers have struggled mightily to find diamonds in the rough since Sam Hinkie left the team, it’s reasonable to have grave concerns about their ability to do so moving forward.

Bigger need for Philadelphia and why — backup point guard, or backup wing who can play the three or four?

While the Sixers could really use a backup point guard who can help them defend ball-handlers (see: D’Angelo Russell and Spencer Dinwiddie erupting against the Sixers a couple of weeks back), having more depth when it comes to switchable wing defense is the more pressing need. The Sixers have a very good wing defender in Butler, and while Simmons may not necessarily be an elite defender, he is a clear positive against many positions, making him a massively valuable defender. But after those two, the Sixers have putrid perimeter defense depth. Wilson Chandler has good size, but isn’t great on the ball and often gets beat off the ball. JJ Redick and Landry Shamet stand no chance because of their poor physical attributes. Furkan Korkmaz is way too raw and skinny to have a chance against real NBA wings. And while the team’s defense against guards has been a struggle, rookie Zhaire Smith could prove useful against guards when (if?) he plays this season. TJ McConnell will often be physically overmatched, but has made a defensive impact in the past when facing the right matchup.

Who wins — Nets or Sixers?

Even with Jimmy Butler likely sidelined, I’ll take the Sixers tonight, relying on what will hopefully be a bounce-back game for Embiid, as well as the recent resurgence of All-Star-caliber play from Ben Simmons. The Nets always play the Sixers tough, but as long as D’Angelo Russell and Spencer Dinwiddie aren’t both shooting out of their minds from beyond the arc the way they did last time, the Sixers should be able to win on their home-court, where they own the NBA’s best record.

It’s worth clarifying that the Wizards are still playing quite poorly. Their wins have generally come in close games against bad teams, and many of their losses have been blowouts. The last two games — losses against the lowly Cavs and the Oladipo-less Pacers — were brutal.

But their performances have improved a bit. One factor comes down to scheduling. Washington’s season started with a long West Coast road trip, during which they went 1-4. Their schedule has eased up since mid-November, though, and they’ve outalented some bad or injured teams in the last few weeks.

Scott Brooks also changed up the team’s lineup. When everyone’s healthy, he starts Thomas Bryant at center alongside four perimeter players. That group isn’t helping the rebounding issues, but it flies up and down the court, which has boosted Washington’s offensive efficiency. Markieff Morris, the player Brooks has relegated to bench duty, is playing his best basketball of the season and offering an interior hub to a second unit that otherwise lacks real playmaking ability.

Thomas Bryant seems to have had some good games and some not good games. Can he be a consistent and productive center for this team?

It depends on your goals for the season. Bryant is a project. His good games come when his recognition and technique defensively catch up with his quick feet and long arms. He can be an unrefined disaster in his bad games, messing up dribble-handoffs, clogging the offense and failing to rotate against drivers at the rim. You can’t have that type of inconsistency in your rotation if you want to be a good team. But being “good” isn’t really Washington’s goal right now — or at least it shouldn’t be.

The Wizards want to sneak into the playoffs while also unearthing a cheap young player like Bryant. They’re not exactly failing. He’s been a defensive upgrade on Dwight Howard with his mobility, and when he isn’t up to snuff, Brooks isn’t afraid to sit him for three quarters and have Morris log crazy minutes.

Who wins — Nets or Wizards?

Both John Wall and Otto Porter are day-to-day, but if we’re counting on one of those dudes playing, I’ll go with the Wizards. Bradley Beal has been great this season even though his long distance shooting has been off. I’ll take his talent over a struggling Nets team without Caris LeVert.

People talk a lot about Trae Young, but another rookie is in the Hawks starting unit. How has Kevin Huerter looked so far?

Red Velvet has earned the respect of the coaching staff to be out there starting everyday. He’s shooting 38.5% from three with more made threes (30) than turnovers (26). Over half of his total offense is coming from three-pointers and nearly all of that offense is from spot-up shooting as nearly 87% of his three-point makes are assisted on. He still needs to get better in using his ball-handling to get the rim and then he also has to work on finishing there. I think what this is all saying is that Huerter has been very solid playing off-ball to Trae Young which is crucial.

John Collins has been very good since coming back from the injury that cost him the first 15 games. What’s Collins’ long term outlook? How good can he be?

When you look at the core young big men in the NBA, it’s John Collins who leads the front. Advanced numbers loved him in year one and he’s taken a massive leap to year two. He’s a rarity because you look at him and almost see a small forward. Especially when he’s gotten as good as he has with slashing and hitting pull-up midrange jumpers. What he really added in year two was a better looking perimeter jumper and a lot of upper body strength; and that changes everything. Now opposing centers struggle to back him down, now he’s bodying and finishing through defenders more. He’s always been a fundamentally sound defender and probably the best one the Hawks have. Then again he’s the best player this team has. John Collins is the purest embodiment of the new-age center and how this new era of basketball is changing young forward prospects. He’s gonna be in Atlanta for a long time and when he hits his prime he should make multiple All-Star teams in the East. He’s a great prospect to have, just hope his injuries don’t linger.

Who wins — Nets or Hawks?

The Nets are a better team than the Hawks but a lot of that depends on both team’s starting point guards and their bench units. Jeremy Lin vs Spencer Dinwiddie would make for an awesome matchup if both were on. I think they’re two teams that could put on an close and entertaining game but Brooklyn would likely pull through most of the time.