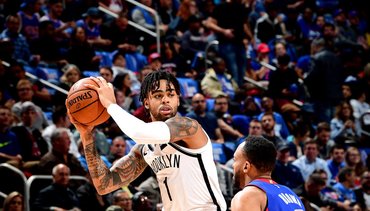 All season, I’ll be bringing you thoughts from Brooklyn’s opponents ahead of the teams meeting.

This week, I’ve gathered three voices to answer questions before Brooklyn takes on the Pistons, Knicks, and Pacers. Joining us for the Pistons game is Aaron Johnson from Palace of Pistons, for the Knicks is Stone Strankman from Knicks Wall, and for the Pacers is Tony East from 8 Points, 9 Seconds. Say hi, and go follow them for more about the teams they cover.

This will be Blake Griffin’s first full year with Detroit? What do Pistons fans and writers expect to see from Griffin this year?

There are high expectations set forth for Blake Griffin in his first full season in Detroit. Griffin is still a very good player in the league, and at 29, still has a lot left to contribute to a team that has placed their faith in him. His game has evolved and with a more refined perimeter game, the anticipation is for Griffin to carry the Pistons’ offense. In preseason, Griffin was effective and exciting in limited minutes, displaying his usual springy self while shining as a playmaker and shooter. If he can remain healthy, Griffin may be due for one of the better seasons of his career.

The Pistons have been mentioned as players for the last couple of playoff spots in the East. What needs to happen for that to become a reality?

If Detroit can stay healthy, this is a good team, especially in the East. Reggie Jackson’s health is the biggest priority, as the Pistons collapsed when he went down with injuries the past two seasons. Jackson has a poor rapport around the league, but he is actually a very solid point guard and it has shown when he is on the floor. Outside of staying healthy, Detroit will need their young wings to take another step forward in their development, specifically Stanley Johnson and Luke Kennard. This is year four for Johnson, and he will be a restricted free agent at the end of the season. He had a promising rookie year, but his offensive game has not progressed nearly enough to reach his ceiling, and it will hold him back from being what he can be until he improves. Stan Van Gundy held Kennard back last season, keeping him on a short leash and playing him sporadically. He had an efficient rookie season and displayed an offensive repertoire that will be extremely useful for this Detroit team. A boost in confidence and a mentality of shoot first would help Kennard be even more effective on the floor as he tends to be a bit passive.

Is there an under-the-radar Piston who we should all pay attention to this year?

If Reggie Jackson goes down again, watch out for Bruce Brown. He likely won’t see the floor much this year because of Detroit’s depth on the wing, but Casey said the team will also work to develop him as a point guard. A more likely breakout candidate would be Langston Galloway, who received a ton of run in preseason and was uber effective. He takes the majority of his shots at the rim or behind the arc, a playstyle that fits hand-in-glove with Casey’s preference of play. Detroit is paying him $7 million annually as well, so getting production from him would be nice.

What is your prediction for the Nets/Pistons game?

The Nets are my second favorite team in the league. I am a huge fan of the rebuild Sean Marks and Kenny Atkinson have gone through with the franchise. I believe D’Angelo Russell is a MIP candidate and Spencer Dinwiddie is not only a great Twitter follow, but a great player to have alongside Russell or backing him up. The youth on the roster appeals to me and I am excited to see where this team will be at next season, after an offseason with their own first round pick and a ton of cap space to be used. I’m picking Detroit to win this game because they are the better team this year, but the Nets will be fun to watch throughout the season.

Who is the best player on this Knicks team at this point — not counting Porzingis, since he’ll be out for a while?

I’d have to say the best Knick on the roster other than KP is Enes Kanter. His offense is wildly good in the post and he can rebound extremely well. His defense certainly isn’t good, but the offense he provides is very good.

Is there an under-the-radar Knick to pay attention to this year?

An under the radar Knick everyone should start paying attention to is undrafted free agent Allonzo Trier. They call him Iso Zo, and for good reason. The kid can get a bucket in almost every situation, and even Fizdale said whenever he gets the ball he’s going to do his thing. He’s on a two-way contract but don’t be surprised if he’s on the 15 man roster shortly after the season starts.

The Atlantic Division has three teams that are clearly a step ahead of the Nets and Knicks. Do you see both of these teams as on the same playing field in the battle for fourth place in the division, or is one ahead of the other?

It seems that the Nets are just a tad ahead of the Knicks in the division for this season. Without KP for a majority of the season, and no true leader on the team I feel like the Knicks will struggle. The youth on the Knicks is a good thing for the future, but for this season it doesn’t look too bright.

The Nets and the Knicks have already met twice in the preseason. What do you expect to see in the first regular season meeting? Who wins?

Last season the Knicks swept the Nets in the regular season series if I’m remembering correctly. I believe it’ll be a little tighter this year, and based on what I’ve seen in the preseason I think the Knicks will come out decent to begin the season then fade after a month. I’m going to take the Knicks in the first matchup of the season against the Nets.

Last year’s Pacers had a surprisingly strong season and the main assumption is that that will continue this year, with Indiana rating somewhere between third and fifth in the East. Is there any chance the team is better or worse than expected, barring injury?

I would say that the expectations for their win total (45-50) are probably accurate. They improved the roster but there are many areas where things could go worse than last year, and I think the combination of more talent and less statistical noise will balance out to a similar roster.

Where that ranks in terms of playoff seed is another question. I think 3-5 is a good range (surrounded by Philly and Milwaukee) but Miami with Jimmy Butler or Washington, in general, could be right on their heels.

What do you think the addition of Tyreke Evans means for Indiana’s rotations? How will the team use him?

The starting lineup will remain the same. Given how effective that group is – that should be no issue and cause no strain of thought for anyone.

It does “relegate” Evans to the bench even though he is one of the most talented players on the roster. I would muse he plays the third most minutes per game when he actually plays though (behind Thad Young and Victor Oladipo) so he is really just coming off the bench as a formality. He will probably close games too.

My guess is that he is the lead ball-handler and play initiator off the bench and the perfect secondary option next to Oladipo when they sure the court. His role will be fluid and lineup dependent.

Is there an under-the-radar Pacer to pay attention to this year?

Cory Joseph, I guess. The man gets zero headlines but is the definition of consistency and does an obscene number of little things that help a team win. He won’t be discussed, like ever, but he will be an important part of winning in Indiana.

This is the first of three meetings between the Pacers and Nets. How do you expect this one to go?

Last year, these two teams faced off in a ridiculous 140-131 game to start the year. I would predict something similar this year since the Nets defense doesn’t seem like it will be great, but both teams are on back to backs so this one could be a little bit lower in terms of scoring.

Vic has no trouble beating any of these Nets guards. Myles did well against Mozgov/Zeller and Allen last season. The filler players did their parts. Outside of an OT game in December, the Nets were a fairly small block in the road for Indiana, and I doubt that changes much this year. I think the Pacers win. The fewest points Indy put up against Brooklyn last year was 108, so I’ll say 110-98. Should be a fun one.

So, there you have it! Three writers for Brooklyn’s three opponents, all picking their team to beat the Nets! I hope y’all have enjoyed getting to read some thoughts from the opponents — err, oppoNets — for the first week of NBA action.