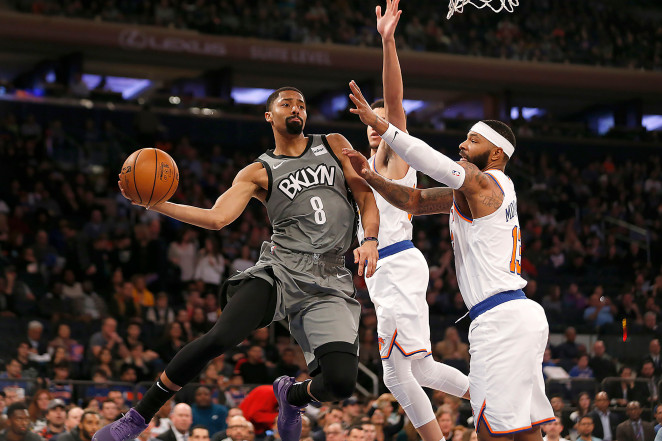 The Nets defeated their crosstown rivals for the second time this season, 103-101. The Knicks made things uncomfortable for Brooklyn in the fourth with a 29-21 quarter advantage. With Spencer Dinwiddie leading the way, Brookyln was able to get to .500 and secure their eighth win of the season.

Dinwiddie produced his fifth straight 20-point performance as his form in the absence of Kyrie Irving and Caris LeVert continues to grow. He racked up 30 points to go with 4 assists and 4 rebounds.

The three ball was hitting for the point guard (3/8 3PT) which led to easy looks and trips to the charity stripe (13/14 FT).

“They were double-teaming him all night. … He did a good job getting it out, exploiting the mismatch. What he’s also doing, he’s doing it on both ends, on the defensive end, too. … He’s playing really good basketball.”

Jarrett Allen maintained his solid production with another good outing. He posted 18 points (8/11 FT), 10 rebounds (four offensive), an assist and a steal. The young big man is growing in stature day by day.

Coach Atkinson remarked that rebounding is the most noticeable improvement from the 21 year old.

“I think his rebounding; 10 boards again tonight. We missed shots, and he goes and gets it. That’s kind of been his area of improvement. Be a better rebounder, and the offensive boards, it’s been a pleasant surprise.”

The starters continued their hot vein of form as four of the five players were positive in plus-minus. Dinwiddie led the team (+8) while Temple was the only player who was a negative (-3).

During the broadcast Nets legend and current ESPN and YES Network analyst Richard Jefferso, revealed he was approached by the Knicks before he decided to retire.

“They were the one team that offered me a job, and I decided to retire. I just knew it was time. When the Knicks were looking for me to play for them, I knew my time in the league was over.”

Little tidbits from the game: