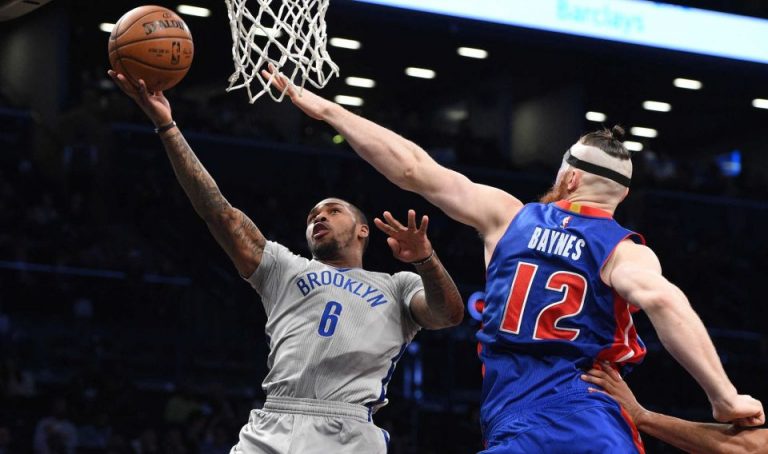 Coming off of the most brutal loss of the season at the hands of the Chicago Bulls, the Brooklyn Nets needed to bounce back. Against the Bulls, they looked out of sync and like the team everyone thought they would be going into the season. Wednesday against the Detroit Pistons, they were able to do just that with a 101-109 victory.

If facing versatile threats like Tobias Harris and Marcus Morris weren’t enough, they also had to contend with All Star center Andre Drummond down low. After taking the lead early in the game, the Nets were able to extend it to 21 points in the third quarter and eventually held on to win the game, despite losing Jeremy Lin at halftime with a minor hamstring injury.

Behind the incredible performances of Brook Lopez and Sean Kilpatrick, the Nets were able to grind their way to their second victory on the year. Lopez ended with 34 points on 12-21 shooting from the floor (four of eight from deep) and 11 rebounds, Kilpatrick added 24 points while shooting 8-13 from the floor and a perfect four of four from deep to go with his ten rebounds, three assists, and two steals. In Lin’s absence, we learned a lot of things about the team and what drives this them to victory.

If you didn’t watch the game and only looked at the box score, you’d say that Booker had a bad game and failing to impact the game. A stat line of four points, four rebounds, two assists, two turnovers, three steals, and one block would seem pretty pedestrian, but Booker isn’t a player that is going to always look good on a stat sheet. He impacts the game in ways that don’t show up on the box score. He is crucial to their success and is just as important as Lin or Lopez to this team.

From tip off to final buzzer, Booker was battling last night. Whether is was turning broken plays into points, creating opportunities for teammates in the fast break, jumping passing lanes, or sticking up for his teammates; he was there to deliver.

In games decided by so few points, its plays like this and guys like @35_Fitz that make the difference Turned nothing into pts #BrooklynGrit pic.twitter.com/ol2le7sfew

I sound like a broken record, but Booker is my favorite Net. Reliable guy, look at him go to work on Morris #Nets https://t.co/uVKdc1PrzX pic.twitter.com/r0MmeEisQG

Booker gets the board, starts the break, and finds Kilpatrick for three in transition. If this becomes a staple, they can be dangerous #Nets pic.twitter.com/hg9pneHHvh

Booker doesn’t play that stuff! Love the scrappy play. No one is messing w/ his rookie point guard and gets away with it #BrooklynGrit pic.twitter.com/4oL9HVqiNX

He already does so much, and there is potential for him to do even more. There were several moments last game where he would make a pass out to the perimeter, demonstrating his excellent vision, and a teammate wouldn’t convert. My favorite was an ally-ooo play from Lin that was almost a highlight reel slam, but Booker just barely missed converting it. His gritty, physical play style is exactly what this team needs and so far, they have been responding to what he has been putting out.

Ended in a broken play but good moment:

Its time for Rondae Hollis-Jefferson to go to the bench

A first round pick in last year’s draft, Hollis-Jefferson has struggled mightily in his second year. Averaging 2.8 points and 3.8 rebounds in 25 minutes of action as a starter is pretty bad, but what is the worst is his shooting. After spending all summer re-tooling his shot, he is in weird limbo with his mechanics. Torn between his new ways and reverting back to his old, Hollis-Jefferson and his lack of production can’t be allowed in the starting lineup anymore.

Anyone wondering why RHJ’s shot isn’t going through, just look at it. Awk positioning, hurried follow through, no confidence. pic.twitter.com/fYQZPVgmqB

What he needs is to take a step back and get back to doing what he does best, defending at a high level and running the floor in transition. It is clear that this new system is a little overwhelming to him, and understandably so. Mix in a new coach, a new system that doesn’t fit your skill set, new shot mechanics, and being one of only five returning players to the locker room and it isn’t too surprising to see why he’s had such a poor start to the season. Tonight, he was the only person on the Nets that didn’t score and he went 0 of 4 from the floor.

Taking some time and going to the bench could let him get some extra time with an assistant coach to help guide him or let him take a deep breath and get back to playing within himself. Taking bench minutes and making him play a role will help him focus on doing what he does best with the time he is given. Plus, it would open up a spot for someone that has more than played their way into a larger role.

One of the biggest and most pleasant surprises of this young season has been the emergence of Sean Kilpatrick. After honing his game in the D-League and earning his stripes with various teams on 10-day contracts, it seems Kilpatrick has found a home in Brooklyn. Averaging 14.8 points, 2.6 rebounds, and five assists in 24.3 minutes of action, he has been one of the most reliable scorers for the Nets this season.

Against the Pistons, Kilpatrick was on fire. He finished with 24 points, 10 rebounds, three assists, and two steals and looked like one of the leaders on the court. He is so versatile that he can play both guard spots and spend time on the wing. When Lin went down at the half, Kilpatrick stepped up and played a majority of his minutes at point guard in the second half. Under his control, the Nets had one of the best third quarters of the season and even recent memory.

Kilpatrick running the point. Great drive, great move to get open, bummed he didn’t finish but Hamilton was there for clean up #BrooklynGrit pic.twitter.com/B6dGMoKX99

The biggest concern about making him the starter was his defense. Up to this point, he hasn’t been known as a lockdown defender. He has mostly been brought on to be a scorer off the bench, but after tonight’s performance I think he has shown the improvements in his game to be given a chance.

This is how Kilpatrick will become a starter. If he can make RHJ’s only attribute expendable, he could take over starting job #BrooklynGrit pic.twitter.com/33duiCDYV4

At the end of the day, things are going to look very different when Randy Foye comes back from injury. He will undoubtably take minutes from both RHJ and Kilpatrick, but it is early enough in the season where rewarding a guy like Kilpatrick with a starting job is both a feasible task and could be a gamble that pays off. If he keeps playing with this level of production and confidence, he could be in for a monster year.

If the Nets want to stay winning, Brook is going to need to show up every night

Brook Lopez is hands down, far and away the best player on this team. Yes, he is expendable and no, I don’t see him on this team past the trade deadline, but he is unequivocally the best player on this roster. If you didn’t already know that, then Wednesday’s performance should clear that up. Boasting a stat line of 34 points and 11 rebounds in 28 minutes played, Brook showed what he could do when absolutely everything is going right. Whether is was shooting from deep, driving the lane, or posting up like his ole’ self, Brook was feeling it

Underrated moment from last night, Brook and Andre going at it in the post is why I’m out here! I miss dominate post play… #BrooklynGrit pic.twitter.com/cDJpBvIpax

If you remember, in the Nets’ other victory on the year, Brook also had a big performance scoring. Against the Pacers, Brook scored 25 points in 25 minutes in the 94-103 victory to lead the team. Right now, Lopez is and should be the guy scoring most of the points. The emergence of his three point shot has been refreshing, but last night’s performance is clearly not sustainable on a night in, night out basis but it will be an interesting development as the season goes on.

This team is in desperate need of scoring and rebounding, something that Lopez is suppose to be able to provide nightly, but he has a tendency to fade into the background. If the Nets want to keep winning and if Brook wants to a) stay on the team or b) get traded to a decent team, he will need to start showing up every single night.

Rest nights on back to backs should be taken, given his injury history and lack of expectation on the season, but when he is on the court he needs to give it his all. He can’t finish with a stat line of seven points and five rebounds while shooting one of seven from the floor in 21 minutes anymore. He needs to get back to being a 20/10 guy, or at least as close as he can get to it. It is there, he can do it, its just a matter of if he can do it and do it consistently before he gets moved.

*Author’s note: I will be doing these recaps for most of the season. They will be posted next day, mid day at the latest (hopefully) and I will continue to pull highlights and clips like I did above. Please feel free to DM me on Twitter or reach out to me in the comment section with any feedback or requests for clips/highlights/analysis. Got to give the people what they want!