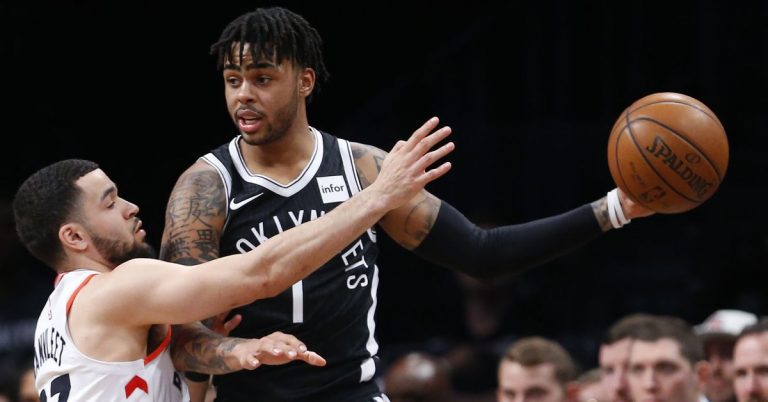 It may have taken overtime, but Brooklyn got their first win of the preseason against Detroit on Monday night. The team’s young core was all fantastic. Russell racked up 25 points, LeVert put up close to a triple-double (19 points, 9 rebounds, 8 assists) and Allen was sensational defensively and on the glass (17 points, 9 rebounds, 4 blocks).

The win came at a cost though with Allen Crabbe suffering a sprained left ankle. The injury will unfortunately keep him out of the Nets upcoming game against the Toronto Raptors as the team looks to continue their winning form. Here are 3 things to watch in Brooklyn’s third preseason matchup.

Kenneth Faried only played 32 games for the Nuggets last season. The deal in acquiring him, Darrell Arthur and a protected first-round pick was one of Sean Marks’ savviest moves since taking over as GM 2 years ago. Despite Faried’s lack of playing time last season, the 28-year old still has plenty to offer on the court.

He’s an elite rebounder and his athleticism is scintillating when utilised in the open court and/or pick and roll. Faried told reporters upon his arrival that he’s looking to revitalise his career in Brooklyn, and he’s saying all the right things.

“They brought me in here to be the player I am, and that’s the hustle, grit, grind hard, energy guy, go grab every rebound, play defense; and you may be surprised this year about the other things I can do in my repertoire. But I’m not one to talk about it; I’m going to just show you.”

If some of those ‘other things’ he can bring are 3-point shooting then he may find himself cracking the rotation on a regular basis. The preliminary signs don’t look too bad.

Nets fans and coaching staff won’t necessarily be wanting consistent perimeter shooting from the big man, rather the same energy on the glass and steady progress on the defensive end. A good showing against Toronto will do wonders for Faried’s confidence as he looks to earn a spot in the rotation heading into the regular season.

The Nets offense was up and down against the Pistons. Yes they shot 46.3% (44/95) from the field but they were also subpar from three (11/35, 31.4%). The subtle changes from the coaching staff are still being learnt from the players as was emphasised by some of them following the game.

Russell: “It’s new to us. I figure the more time we get to practice it, the easier it’ll be.”

Dinwiddie: “Instead of four-out, one-in, we’re doing a lot more five-out. We have a lot more motion out of that. That does free up a lot more spacing.”

The focus overall was reiterated by the coach after the win.

“We’ve simplified, cleared up some of our spacing. … You watch in the exhibition games right now, you see a lot of guards out there. That was part of the thinking of tweaking the offense where it fits a four-guard system.”

It was certainly an improvement from the performance against the Knicks but Atkinson still wasn’t entirely satisfied.

“There were some good things, again more space to drive, and 36 3’s were good. I don’t know how many free throws that we had—17, that’s not great. We’ve got to get to the free throw line more. But, the change is going to take some time until it really clicks.”

It’s a work in progress and the Toronto game provides the team with another opportunity to implement the changes being made.

D’Lo, LeVert and Allen all showed plenty of potential in their performancs against Detroit. LeVert’s ball handling and ability to run the floor was on show for everyone to see. He still had issues taking care of the ball (6 turnovers) but you’d much rather have those sort of nights in the preseason than when the games really matter.

Russell scored the ball at will and had his 3-point shot on lock (5/13, 38.5%). There’ll be nights calling for him to facilitate more, though his reading of the game and how he can affect it (this time as a scorer) shows a level of awareness that will be a big focus for him next season. He also didn’t get the charity stripe at all, which I’m sure the coaching staff will want from him a little more as the regular season nears.

Jarrett Allen continued his late season production against Detroit. He wasn’t as effective against Kanter and the Knicks a week or so ago but made it a point of emphasis to get back to his best against another tough opponent in Andre Drummond. The effect he had on both ends of the floor is exactly what everyone surrounding the franchise will be looking from the sophomore big.

The trio showed plenty in Detroit, the challenge will be backing it up a second time around this time against Toronto.