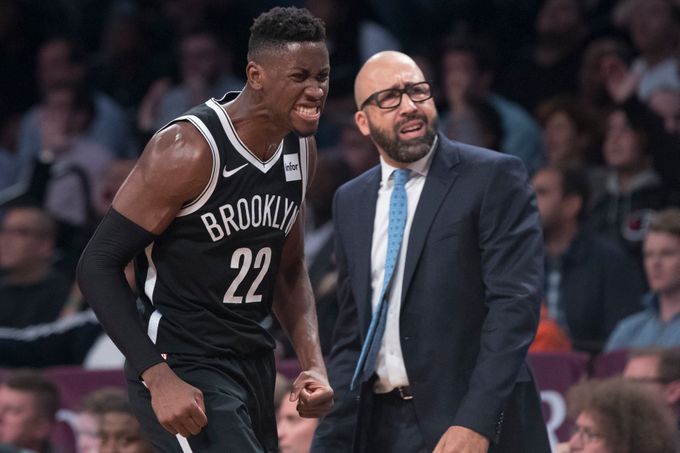 Oh, how sweet it is. The Nets got their first win of the season and even better it was against the crosstown competitor. Brooklyn was swept by New York last season in their series of games with their borough rivals so it makes the victory that much sweeter. There were plenty of takeaways from the tight win, here are just a few.

Caris Is a Star

LeVert had his career-high 27 points in the opener against Detroit only to top it again with the clutch bucket to seal the win.

We’re witnessing the development of a special player. His poise and ability to come up big on both sides of the floor is the stuff you see from the game’s elite stars. Caris is more than living up to the preseason hype. If he continues at this rate he might just win an award his teammate got very close himself to winning, the Most Improved Player.

His confidence and decision making has shot up remarkably. Given all the tools he has in his arsenal he’s set to be a menace for backcourts around the league for many years to come. The challenge for him now will be backing it up on a game-by-game basis.

With D’Lo having an impressive 4th quarter (9 points including a clutch three-pointer) and Dinwiddie continuing his steady play, the Nets have an enviable young backcourt with plenty of firepower and versatility.

Jarrett Allen is developing into an elite rim protector. It seems that players still underestimate his length, leap and budding strength around the rim.

He’s made that defensive area his bread and butter, except its fancy artisanal bread and the silkiest, smoothest butter you can think of.

Last 5 players to register a double-double and 4 blocks in each of the 1st 2 games of a season:

Kanter may have had his way with him in the post but Allen made some crucial defensive plays late in the game to help the Nets get the win. Davis chipped in with some equally important stops and was a rebounding machine. His 10 rebounds off the pine helped the team gain a real ascendancy in that area (55-36). The Nets centers have become a real weapon for them and their value has trickled across the other four players on the court.

It’s the same issues that continue to plague the Nets. There aren’t many nights where you’ll have 22 turnovers and still pull out the win. Against stronger competition, they’ll really need to tighten that up. It’s something I’ve mentioned at length dating back to the preseason. As they get into a rhythm on the offensive end and get more guys back from injury you’d like to think those numbers will level out to a more reasonable rate.

There were plenty of guys that got into foul trouble throughout the first and second half. Those dinky fouls that piled up forced Kenny to chop and change the rotations which certainly had an effect, especially in the third quarter. You can’t blame the officials for all of that as poor calls were made on both sides. Disciplined basketball offensively and defensively goes a long way to net a positive result.

The injury to Treveon Graham made an already pressing problem even worse. His hamstring strain allowed rookie Rodions Kurucs extra minutes. He provided great energy off the bench and made some big shots at crucial times. The Nets are already weak at the four position, fingers crossed the injury to Graham is only a strain and nothing more serious. New dad Rondae Hollis-Jefferson should also return soon following the birth of his child.