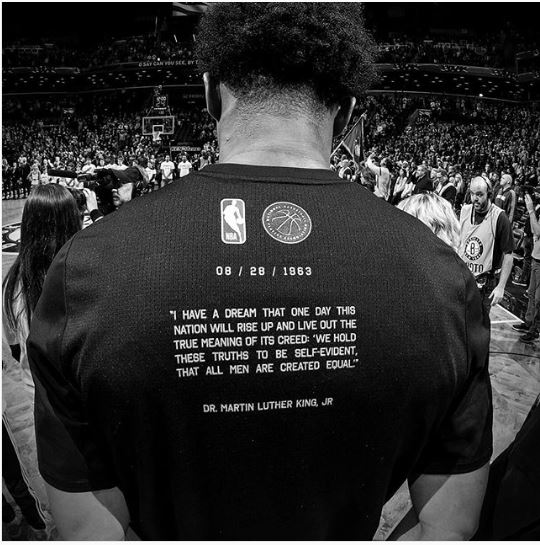 Despite entering the match with a subpar road record and having lost 10 of their past 12 games the New York Knicks withstood the charging Brooklyn Nets to spoil the home team’s hopes on MLK Jr. Day.

Cold shooting, lack of ball movement and the inability to stop the Knicks’ powers resulted in a disappointing loss for the Nets.  Brooklyn trailed by 10 points at the half, but capitalized on copious free throws and their gritty nature to cut the lead to one possession (2 points) as the teams headed for the final frame.

The Knicks road record pales in comparison to their success at home. It isn’t MSG, but there are ample Knicks fans who descend upon Barclay’s for this cross city rivalry. Ultimately, games versus the Nets likely feel more welcoming than a typical road game. Punctuating this fact two of the Knicks five road wins occurred at Barclays.

There is a reason unicorn’s are mythical:

Clearly the New York Knicks win demonstrated something the Brooklyn Nets covet – a transcendent star the franchise can build around. Granted, the jury is still out on D’Angelo Russell‘s ceiling, and he may well prove to be that cornerstone talent. Yet, it’s hard not to be a little envious of the cross town rival Knicks and Kristaps Porzingis.

Porzingis’ asset list is extensive. In addition to his 7’3″ frame, offensive versatility and ability to stretch the court the big man exhibits high basketball I.Q and is a decent defender. Yet, it’s his leadership and ability to quickly adapt to situations which offers intangible benefits. Navigating the New York media market takes a special personality and being the number one option carries pressures well beyond what most stars deal with.

As an example of Porzingis uniqueness his stat line covers the gamut: 26 points, 9 rebounds, 2 blocks and hit  2 of 3 triples.  On the heels of coughing up a 19 point lead to the Pelicans the Knicks almost managed to give the hometown Nets the win. Again, it was Porzingis who delivered on his pregame missive of letting the game come to him instead of forcing his shot or feeling the pressure to be ‘the man’.

As for Russell he was visible on the bench this evening and involved in the game. at least verbally as a comment he made led to a technical foul. Russell’s return may be imminent given his practice with the Brooklyn Nets G-League affiliate the Long Island Nets.

Man of the moment – Spencer Dinwiddie has functioned as the catalyst in the majority of the Nets recent wins. Yet, his shot never found its mark and was closer to the frigid outside temperatures. Dinwiddie was 2 of 14 from the field for 8 points. In spite of his cold shooting night the guard managed to produce 4 rebounds and 5 assists. His starting backcourt partner (Allen Crabbe) was even less successful scoring just 6 points.

Caris LeVert had more luck connecting on 8 of 20 from the field for 20 points. LeVert was the most successful from the perimeter (3-5), but his assists were in short supply (1). In fact the team delivered only 16 total assists.

The continuing dilemma is the copious triples the Nets hoist and pace they try to force often doesn’t match the talent on court. While the Knicks attempted five fewer total shots and half the triples they came close to doubling the Nets assist total and outscored the Nets by 15.

Specifically, New York made 82 shot attempts connecting on 51.2 percent, attempted 16 triples (making 9 for 56.3%), and had 27 assists. In contrast the Nets shot 87 field goals and 32 triples with a meager success rate of 36.8% and 34.4% respectively. This only adds fuel to the argument the Nets are in need of a stylistic change, particularly considering the results.

Aside from LeVert the other bright spot (and encouraging sign) was DeMarre Carroll had his best game in a while. DMC led all Nets with 22 points but his 8 rebounds, 3 assists and steal were welcome signs from the vet after several poor performances.

On a whole the stats speak to the Nets having issues being successful in most categories. The Knicks won battles on the glass (62-51), in the paint (48-36), were plus 3 in fast break scoring and were plus 7 (10-3) in blocks.

Moving forward, Kenny Atkinson has decisions to make regarding the offensive style of the club.

Next up the Nets host the San Antonio Spurs on Wednesday.

All statistics are courtesy of ESPN.com. 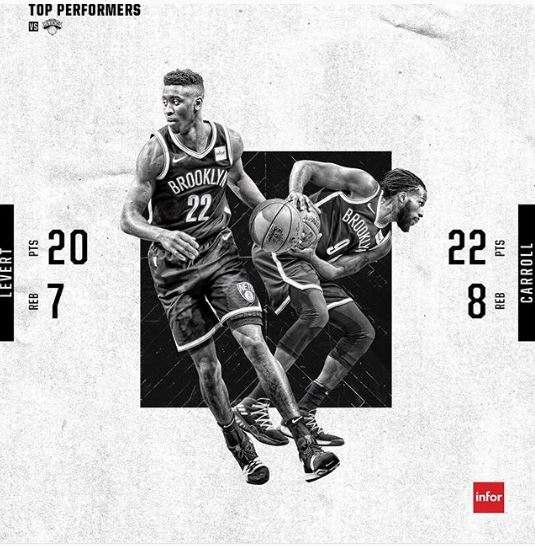