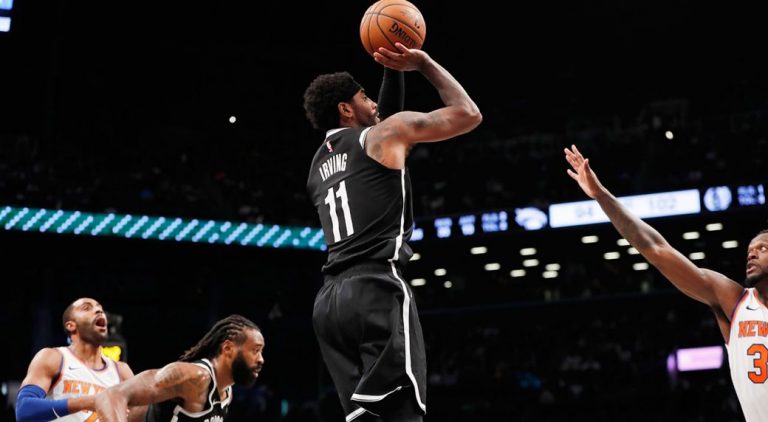 For much of the leadup to the matchup with the Knicks the narrative surrounding had been centred on the battle for fan supremacy. Kyrie Irving made an appearance at the opening to a Foot Locker and spoke of his desire for the Nets to “take over the entire city.”

There was plenty of back and forth between the rival fans. Some pundits even choose to sit on the fence when it came to the debate for basketball dominion.

More importantly there was a game to be played and Brooklyn were able to secure the all-important win. Despite a late surge from New York, some heroics from Kyrie Irving allowed the Nets to close out the game, 113-109.

Brooklyn got off to a good start with Coach Atkinson looking to run sets for guys like Taurean Prince and Joe Harris early. It worked as both guys were engaged and executed on both ends.

Kyrie was putting a lot of pressure on the defense, drawing contact at whim. He went to the charity stripe six times in the opening period.

The bench unit was also much more effective in their early minutes. They were sub-par to say the least in the game against Minnesota where the reserves combined for minus-63. Atkinson pointed out that it’s not just on the players to figure out the winning combination, but him too.

“That’s also me figuring out what that unit looks like, how we stagger the minutes and how we can balance it. I think that second unit’s going to be really good; they haven’t grabbed their identity yet.”

With some nice energy from Kurucs and co., the reserves were able to close the first out with a 7-0 run.

They maintained that consistency thanks in large part to some plays that didn’t work in the first game. Spencer Dinwiddie and DeAndre Jordan finally found some chemistry in the pick and roll.

Dinwiddie was unhappy with how he executed against the Timberwolves.

“My timing is off.  So, I’ve got to do better as a passer and get guys involved and throw better passes.”

It certainly clicked in game two.

The Nets were able to maintain an ascendancy over the Knicks to end the half thanks to some patented Kyrie highlights.

Before it’s conclusion, there was a minor skirmish between Bobby Portis and Kyrie on a play down low which got the fans, more than anyone, heated.

Thankfully, Taurean Prince was there to support his star teammate.

Things got sloppy for both teams in the third. That allowed New York to close the gap as they stole the lead in the fourth for the first time since the opening quarter.

Caris LeVert got in foul trouble which prevented him from seeing much of the floor in the final stanza. He did have a nasty hesi’ to add to his growing highlight reel.

In his absence Irving was able to seal the result with a familiar move.

The Nets may not have control of the city just yet, though they do have Kyrie Irving.

It was ugly, but it was a win. On to the next one.