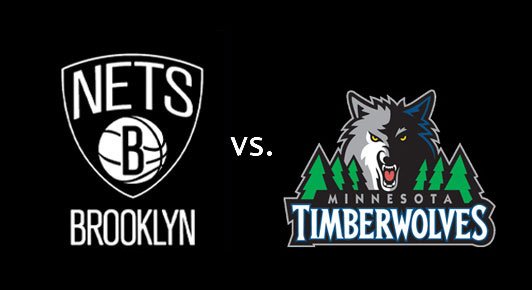 The Brooklyn Nets are 2-4 this season and lost three of their games (excluding the Bulls massacre) by a total 11 points. Another fun fact here is that the Nets are 5-1 against the spread and are 2-2 at home this season. The Wolves, meanwhile, are 0-3 on the road and 1-4 overall.

Brooklyn has had a nice stretch of days off since their close loss to the Hornets on Friday. The Wolves are coming off of a blowout loss to the Thunder on Saturday. Both of these teams are young and rebuilding. Also, both teams are missing their starting point guards in Jeremy Lin and Ricky Rubio.

Karl-Anthony Towns had an amazing rookie year and he has played pretty well so far this year as well. Towns is averaging over 22 points a game and shoots over 50% from the field. Kris Dunn out of Providence has a lot of potential and Andrew Wiggins was a top pick a couple of years ago. This team is young and dangerous.

Towns and Dieng are going to provide a challenge for Brooklyn as the Nets have troubles rebounding and playing in the paint. Someone as long and athletic as Towns and Dieng can and will cause issues for Brooklyn throughout the night. Brook Lopez needs to play well to frustrate and dominate these younger big men.

Rondae Hollis-Jefferson started to bounce back the past couple of games. He scored double digits against the Hornets and has been dishing the ball pretty well too. Whitehead and RHJ will be the two key players for Brooklyn tonight. It has gotten to the point where we know what we will get from Bojan Bogdanovic, Trevor Booker, and Brook Lopez. Whitehead and RHJ are wildcards.

If the back-court in RHJ and Isaiah can produce and not turn the ball over and get team mates involved, it should be a fun game to watch and play. This Wolves team has potential, but so do the Nets. The Nets could easily take advantage of the Wolves’ youth and inexperience. They need to move the ball and slash to the bucket and shoot free throws and wear them out over the 48 minutes of action.

Beware the three-point shot, though. If Brooklyn attempts over 30 three’s again tonight, one could easily project and foresee a loss. If they can move the ball and get good shots and play in the post and in the paint, Brooklyn has a good chance. Towns is a good player but he cannot do it all alone down low. Lopez and Booker need to get fed the ball to wear them down and show them how veteran big men play the game.

This is a bout of two young and inexperienced teams that are in the rebuilding process. Both have pretty promising futures, but Brooklyn is looking to defeat the Wolves and show they are moving forward even without their star and starting point guard, Jeremy Lin.