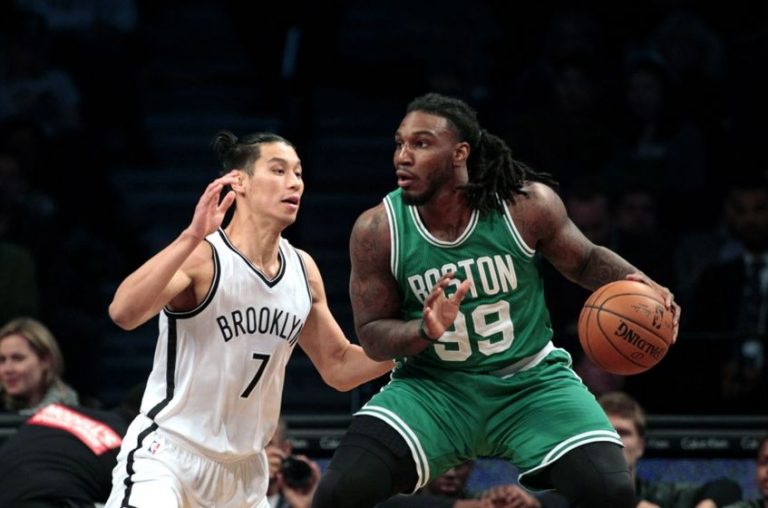 The Brooklyn Nets are looking to close out a season marred by injury and losses on a strong note. After beating the Bulls at home, they took to the road to face the second place Boston Celtics at the TD Garden. What started as a blowout in Boston’s favor eventually became a rather tight contest but in the end Brooklyn wen on to lose the game 114-105.

The Celtics were able to jump out to a 28-13 lead in the first quarter and soon extended that lead to 58-40 at the half over the Nets. Brooklyn was able to make this game competitive, bringing the deficit to ten in the third quarter and getting within six points with four minutes left in the game but in the end Isaiah Thomas and Al Horford were too much for the Nets down the stretch.

Some things to take away from this game are the fact that Brook Lopez is now the franchise’s all-time leading scorer, Jeremy Lin‘s second half performance almost sparked an upset, both Rondae Hollis-Jefferson and Caris LeVert are ending the season on a high note, and that Boston’s defense was the biggest reason they beat the Nets.

It has finally happened, Brook Lopez is officially the Brooklyn Nets all-time leading scorer. To quote Anthony Puccio of NetsDaily: nine years, three arenas, and two states. Brook had a return to form last night after having a couple of below average games in a row. He ended the night with 25 points on 10 of 21 shooting from the floor while dishing out two assists, pulling in seven rebounds, and blocking one shot.

He had an uncharacteristically off game from deep, going one of six, but looked like the Brook of old. He routinely took his man into the paint and went to work. His record breaking basket was a beautiful post fadeaway over Horford, a shot he has probably hit thousands of times in his lifetime.

Whether or not Brook will be on the roster after draft day, Nets fans should truly appreciate everything he has done for them. Brook should be on this roster until he retires.

He has proven time and time again how loyal he is to the franchise, he fits with everything Atkinson wants to do, and he is more talented than any package of draft picks the Nets could get for him following the DeMarcus Cousins trade that cheapened the value of every other center on the block. Seven footers that have an advanced post game and can hit threes is rare. Brooklyn should hold onto Brook as long as he wants to stay.

Its no secret that Jeremy Lin holds the keys to the success of this team. Last night Lin ended with 26 points, four assists, and twelve rebounds while going an incredible 16 of 17 from the free throw line. He knew how aggressive Boston’s defense is and used that to his advantage, trying to go right at the defense with no fear. It seemed like for once the refs were actually making the right calls and acknowledging when Lin was fouled.

Aside from his success at the free throw line, Lin shot four of nine from the floor and two of five from deep. His consistency at the line really slowed the game down and allowed for Brooklyn to chip away at the deficit. This also let Lin and Brook catch their breath, as they both played a heavier load of minutes than normally.

Jeremy Lin is the catalyst of this team. If he was healthy all season, there is a chance Brooklyn is in the hunt for the eighth seed with Chicago and Indiana. The Nets are one of the most improved teams since the All-Star break and that is thanks to Lin. He makes the teammates around him better and he is the perfect player to bring in and establish a good culture. He will have this team firing on all cylinders for sure next season.

Hollis-Jefferson & LeVert Are Coming Into Their Own

The development of Rondae Hollis-Jefferson and Caris LeVert has been fun to watch in the second half of the season. Two players that once looked lost and out of place are now becoming legitimate contributors that the Nets rely on. Last night Hollis-Jefferson ended with 17 points, three assists, 11 rebounds, two blocks and four steals while LeVert had 12 points, two assists, three rebounds, and one block.

Both of these players started the year with a lot more questions than answers about their games. Hollis-Jefferson was a small forward that had no jumper in an offense that almost requires everyone on the floor to be able to stretch the floor with their shot. LeVert was just a rookie out of Michigan that was coming off of a serious injury.

Now as the season draws to a close, Hollis-Jefferson is still lacking a jumper but makes an impact with his defense and athleticism. He looks like he is one consistent jumper away from being one incredibly versatile NBA player.

LeVert has silenced draft doubters and has quietly had a really good rookie season. It seems that with each game he is improving on the last one. His defense is definitely above average for a rookie and he has a very good stroke from deep. Once he becomes more consistent, Brooklyn will have one of the best players from the 2016 draft.

Boston’s Defense Was The Difference In The End

At the end of the day, what ended up being the difference was Boston’s defense. They held Brooklyn to only 13 points in the first quarter, forced them to shoot only 36 percent from the floor and 25.8 percent from deep, and really did a good job of preventing the bench unit from having any sort of impact on the game.

In retrospect, Brooklyn’s slow start really didn’t help them. It created a hole they couldn’t escape from and with the game being decided by only nine points, every little bit helps. Boston’s suffocating defense led to Hollis-Jefferson shooting four of fifteen from the floor, LeVert going four of twelve, and three Nets failed to hit a shot from the floor at all.

The bench unit was ineffective compared to their usual efforts. They usually manage to account for a large portion of Brooklyn’s scoring but last night they were held to 23 points while going nine for twenty-nine from the floor. If the Nets want to close the season out with a victory against the Bulls, the bench will need to show up for sure.