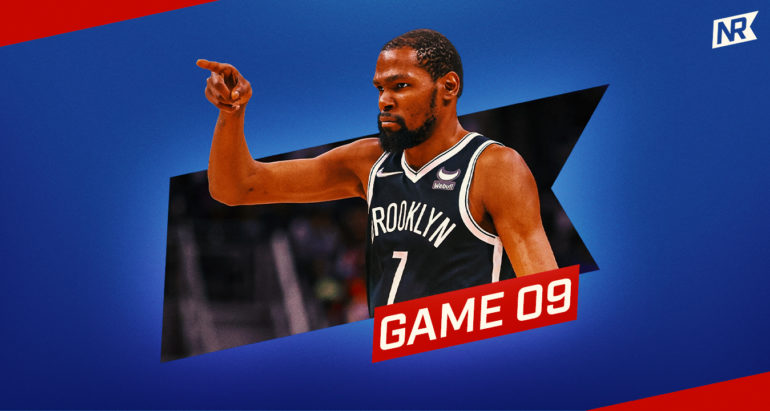 Well, the Nets are officially streaking, but it certainly didn’t come easy as the Nets visited the young gun Detroit Pistons. The Nets found themselves in a dog fight, then a blowout, and then another dogfight.

After a rough shooting half to begin the game, the Nets broke out in a big way scoring 39 points in the 3rd quarter which matched their entire point total from the first half. Just as it appeared Brooklyn was going to coast to an easy win, the Pistons made a furious comeback trimming the lead to as little as one. However, Kevin Durant plays for the Nets and as you can expect, he wasn’t about to just lose this game. Durant scored 8 of the team’s final 10 points including a dagger layup with about 12 seconds left in the game. Some LaMarcus Aldridge free throws clinched the game and Brooklyn was able to hold on for the win

For the second game in a row, the Nets turned it up a notch in the 3rd quarter. This time however it didn’t take Brooklyn halfway through the period to start turning up. After a porous start in the first half, Brooklyn started the second half on an 8-0 run. The key turning point came after a hectic sequence that saw Josh Jackson miss a wide-open dunk after stealing the ball from James Harden. The resulting rebound led to a KD three-pointer sparking a 10-2 run. Harden, who had been quiet all game, found the shooting touch converting on a pair of deep balls. Blake Griffin had a breakaway dunk and LaMarcus Aldridge hit a few shots as well.

For the quarter the Nets shot 16/19 from the field. For comparison, the Nets shot 32% in the first half and only made 3 field goals in the second quarter. Needless to say, adjustments were made. And those adjustments were apparent. The ball moved with much more flow and the team was more engaged on the defensive end. These types of offensive explosions are something that could become a staple for the Nets and feel eerily reminiscent of those memorable Warriors’ 3rd quarters from a few years ago.

It’s no secret that Blake Griffin hasn’t had the greatest of starts to the season. He’s shooting under 25 % from three-point range and is shooting less than 40% in general from the field. Not ideal for a guy Brooklyn will rely on throughout the season. Especially for one that’s in the starting lineup.

The Pistons game was perhaps the best performance for Griffin on the season, which, honestly isn’t saying that much. Yes, Blake did have a season-high 13 points on a season-high 5 made field goals. But for many stretches of the game, Blake was an afterthought on the floor. After a few early buckets off some sweet passing from KD in the first quarter, Blake faded away. He had flashes in the 3rd quarter such as his breakaway dunk and a three-pointer but otherwise wasn’t too impactful.

Blake’s real time to shine came in the 4th quarter. After a dust-up with his newfound arch-enemy Isaiah Stewart, Blake came through huge in the waning moments of the game. With under a minute left and the Nets clinging to a 3-point lead, Griffin drew a charge on Detroit’s Saddiq Bey. In the following Nets possession, Blake made the second biggest play of the game which was a tap-out offensive rebound to James Harden off a Durant missed jumper. The extra possession Blake gifted his team led to Durant’s game-clinching layup.

As the season goes on, the Nets are going to need more from Griffin. His lack of perimeter shooting is currently hindering the Nets offense and his rebounding effort leaves a lot to be desired right now. Nights like Friday against the Pistons are “good” steppingstones but with Kyrie Irving’s return growing more in doubt with each passing day, it’s imperative Blake be better.

It’s become apparent early on this season that LaMarcus Aldridge might just be Brooklyn’s third scoring option. The wily veteran put on a shooting clinic yet again from between 10-16 feet. After a quiet 1st half in which he missed a few highly contested mid-range shots, Aldridge went to work in the 2nd half. After hitting on a pair of jumpers during the Nets’ offensive explosion in the 3rd quarter, LaMarcus flipped the switch to automatic in the 4th. LMA scored 8 straight points for the Nets over a 4-minute stretch all from the mid-range. And frankly, there wasn’t anything the Pistons could do about it either. Aldridge was the only other Net aside from Kevin Durant to record a point in the final period, so it was only fitting he had the final two free throws in the game to seal the deal.

There’s really not much to say about Aldridge’s offensive game in and of itself. He’s been around the game long enough to know where to be on the floor, how to use his body to get his shot off and the correct area to roll/pop too off a screen.

Defensively Aldridge has proven to be the anchor and rim protector Brooklyn has been searching for since trading away Jarett Allen. He’s not the defensive Stallworth that say a Rudy Gobert is. But his length and surprisingly springy bounce have been an added bonus to Brooklyn’s front line. He collected a forceful block and blew up an alley-oop attempt in the 2nd quarter. It’s not crazy to say Aldridge has been the Nets’ 3rd and dare I say 2nd best player this season due to his consistency.

Next Up: The Nets visit Toronto to take on the Raptors (Sunday, 3:00 PM)