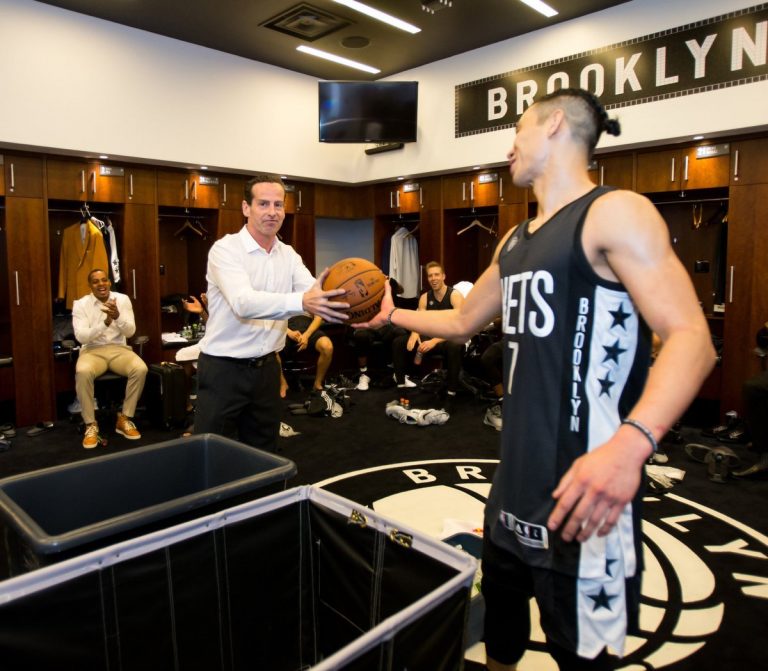 If you told me that the Brooklyn Nets would be 1-1 following meetings with the Boston Celtics and Indiana Pacers three weeks ago, I probably would’ve called you crazy. Following a preseason of force-fed motion offense, Brook Lopez taking every shot from deep, and the possibility of Joe Harris playing major minutes; it didn’t look like things would be clicking off the bat. But the Nets have defied early expectations, taking the Celtics all the way to the fourth quarter in a 117-122 loss and upsetting the Pacers 94-103 at home. In two games there are some definite patterns developing, some good some not the best, but in two games the Nets look like more of an average team as opposed to a horrible team.

This is Jeremy Lin‘s team

When Lin signed with the team, reuniting with the coach that was the driving force behind Linsanity, everyone was expecting him to have a large role. Two games in, and it is clear that this is Lin’s team to lead for the foreseeable future. Averaging 19.5 points, six rebounds, six assists, and two turnovers is a pretty good stat line. In addition to that, he is averaging a very acceptable 46.15 percent from the floor and 44.44 percent from deep.

Lin is averaging the most minutes so far, 30.5 per game, and seems the be the most comfortable of all the players in Atkinson’s motion offense. While he thrives in the pick and roll, Lin hasn’t looked too bad so far. Against Boston, he did not have nearly as many assists as he should have, but there were a lot of good looks that his teammates were unable to capitalize on.

The biggest thing that people should take away from his first two games in Brooklyn is he is finally in a role where he can succeed and be himself. Again, his skill-set is more suited for a pick and roll heavy offense, but being able to lead the team in his own way and having the trust of the head coach are proving to be just as important as the system he is in. As long as he and Atkinson are on the same page, things should be okay in Brooklyn to start the season.

The biggest question, at least for me, coming out of this preseason was how Brook Lopez fit into the offense. As the last of the dying breed that is the low post specialist, Lopez is at a disadvantage in Atkinson’s system. Two games in and there are still more questions than answers. He has been anything but consistent so far.

Against the Celtics, Lopez looked like a player that was just added before the trade deadline, posting a stat line of seven points on one-of-seven shooting, five rebounds, and two turnovers in 21 minutes. His only make came on a three pointer, something he has tried hard to add since Atkinson was announced as head coach, and he failed to impact the game from a rebounding standpoint.

Versus Indiana, he looked like a different player. In just 25 minutes, he scored 25 points on 10 of 18 shooting but again failed to impact the game as a rebounder, only pulling in five again. It is clear that Lopez isn’t use to operating this far away from the basket, the drop in rebounding and points are evidence of that. Lopez also managed to turn the ball over a team high five times tonight.

In a different system, Lopez is a 20 point and 10 rebound player. He is one of the few players left in the NBA that can get the ball anywhere on the post and come away with a basket. His post game is so sophisticated and unfortunately under appreciated in the era of big men that can space the floor. What would be best for him, is to get traded. Fortunately, I think that may happens this season.

Luis Scola has been a disappointment

At the tender age of 36, Luis Scola’s best days are behind him. Not to say he doesn’t have some basketball left in him, but so far he has been a letdown. Against the Celtics, he played 21 minutes and only amassed eight points on three of eight shooting, one rebound, three assists, and two turnovers for a plus/minus of -19. In the victory against Indiana, he didn’t look much better. In 14 minutes, he scored four points on two of six shooting and pulled in five rebounds.

While he is rebounding about the same as rebounding specialist Brook Lopez, playing Scola for more than 15 minutes just doesn’t make sense. At the point in his career, he is a liability on defense and doesn’t offer too much on offense. Thankfully he is a great presence in the locker room, because it doesn’t look like he will make an impact on the court this season.

#BrooklynGrit is more than just a marketing tool

Two games in and the best word to describe Brooklyn’s play is gritty. Against the Celtics, it looked like things were wrapped up in the fourth quarter. Atkinson, down 19, went to the lineup of Isaiah Whitehead and Chris McCullough but the Nets went on an 18-2 run and even got to within three thanks to a dagger from Bojan Bogdanovic. Against the Pacers, Sean Kilpatrick scored 10 of his 18 points in the fourth to ensure a Brooklyn victory.

These players are responding to what Atkinson is putting out there and simply playing within themselves. Instead of worrying about not having a draft pick or how dismal things could get this season, they are just playing basketball. So far, good things are happening. Hopefully they can keep up the trend going forward.

*Author’s note: I plan on doing these sort of recaps going forward for the season, so let me know what you think! Are there areas you would like me to focus on? Players/Storylines/Observations you feel need to be addressed? Something you feel I neglected? Let me know. This is my first season covering the Nets and so far the fans have been unbelievable. I have enjoyed every interaction and I want to be sure I am giving you what you want. Feel free to reach out to me on Twitter or in the comment section below.