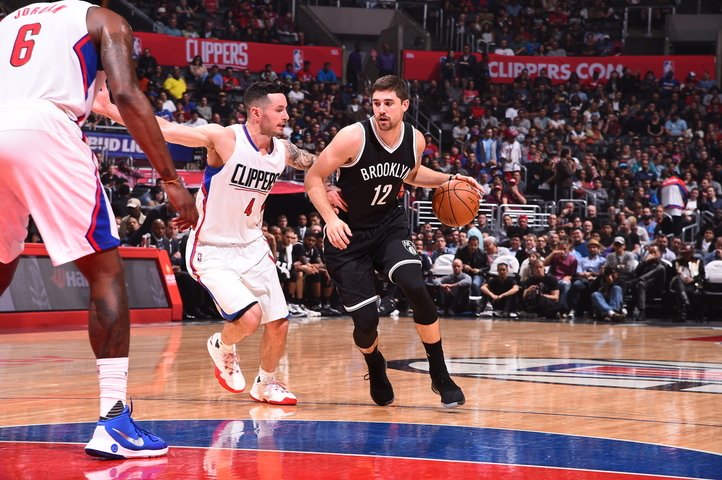 
If you are a fan that stayed up to watch the entire game, I commend you. You deserve a medal and are better than me, because after the first quarter I was more than ready for bed. The Brooklyn Nets got blown out in spectacular fashion, starting the game on the wrong side of a 35-7 run. From there, the tone was set and the game was pretty much decided.

While there were some bright spots in the second quarter, and again in garbage time, the biggest factor to this blowout loss was the absence of both a true point guard and Brook Lopez. Without someone that is pass-first and actively looking to run the offense at the helm, the Nets were plunged into chaos.

Pair that with Lopez being out and the Clippers being one of the best teams in the West; it was a perfect storm for a blowout Nets loss. The Clippers did a great job of exposing a lot of weaknesses in the Brook-Lin less Nets, and there are a lot of constructive things that can be learned from a loss like this.

Last night’s point guard matchup was Sean Kilpatrick vs Chris Paul. Surprise, surprise, the player that is actually a point guard (and one of the best and consistent players in the league) looked considerably better. While Kilpatrick played a bad game, it isn’t fair to ascribe the offense’s stagnation to just him. Without Jeremy Lin or Isaiah Whitehead, Kilpatrick has been forced out of his very comfortable sixth man spot and into a job he isn’t comfortable doing (more on that later).

Outside of Kilpatrick and Bojan Bogdanovic, who had a team high 18 points, no starter shot the ball more than five times. Rondae Hollis-Jefferson took three shots, Trevor Booker took two, and Justin Hamilton took five. In addition to the starting unit, the lack of shot attempts filtered down to the bench as well. Luis Scola played 14 minutes and only took one shot, Joe Harris played 25 minutes and attempted only six shots, and Randy Foye played a whopping 28 minutes and only put up four shots.

Jeremy Lin, or a player that is as committed to running the offense and skilled as he is, holds the keys to this unit. Without him, or a player similar to him, the team doesn’t take shots. Since Lin’s injury, the player that has felt it the most is Bogdanovic. Last night he was able to find a little bit of what he has been missing, but was still well under his normal shot attempts per game. Before the injury, he was shooting the ball around 14 times a contest, last night was a step in the right direction with 11.

Lopez’s presence was missed on defense

Whenever you match up against a team that has such talented bigs, like the Clippers do, it is important to try to limit their impact in the paint. Without the seven footer clogging the lane, Blake Griffin and DeAndre Jordan were able to capitalize. Griffin finished with 20 points and six rebounds on 60 percent shooting while Jordan scored seven points on 50 percent shooting to go with his 14 rebounds.

In addition to that, a non-jump shooter like Luc Mbah A Moute was able to go a perfect five of five from the floor. Without Lopez, teams can drive the lane and bully their way into the paint. While he doesn’t rebound consistently and he is far from being an elite rim protector, Lopez does a great job of taking up space and disrupting things just enough to throw opposing players off their game. Once he is out of the lineup, the next best rim protector becomes… Justin Hamilton, and we all saw how that ended for him.

Before you start harping on me about it being garbage time and kind of pointless, whatever. If you were one of the fans that made it all the way through the game, Chris McCullough‘s 13 points in 12 minutes on six of nine shooting from the floor was a much welcomed and needed lifeline. The young player is starting to come into his own following time in the D-League.

In addition to his efficient shooting, he also pulled down three rebounds, dished one assist, and rejected two shots. He shows potential as a stretch four, knocking down one three, and gave fans a look at what could come the fruition with hard work and time in the D-League. Thanks to his efficient play, he ended up being one of three Brooklyn players that finished with a positive +/-, coming in at +2.

Kilpatrick at point guard on this team feels like a square peg in a round hole. While he is a very skilled player, has decent vision and passing skills, and has all the physical tools, he just is not a point guard and should not be asked to be one. With all of the Nets’ injuries coming at the point guard spot, he was forced into this role.

Anyone that has watched this team knows that Skilpatrick is one of the most valuable pieces of the team. He serves as the primary bench scorer and keeps the second unit competitive. Without his consistent play, the Nets would probably be winless and not been competitive in most of the games so far.

This offense is just like an ecosystem. It is well balanced, thought out, and everything exists for a reason. Upsetting the balance causes everything to go out of whack. Lose Lin and Whiteside to injury, see a lack of shots created. Lose Brook on back-to-backs, and see a gigantic drop off in the interior defense. Move Kilpatrick from his bench scorer role, and you’ll get games where he shoots 5 of 17 from the floor while only hitting two of his seven three point attempts and has five turnovers to one assist.