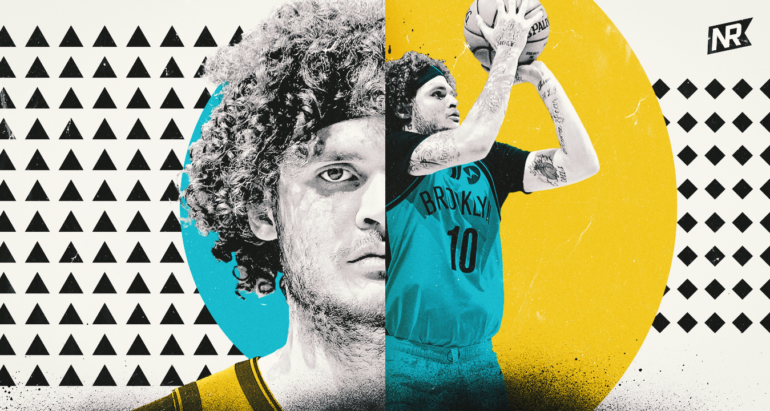 Brooklyn Nets: How Tyler Johnson has reshaped his game

With the multitude of different lineups and rotations the Nets have paraded onto the floor this season, it’s been hard to pinpoint Tyler Johnson’s exact role on the team. One thing is for certain, though: it doesn’t matter. When Johnson is on the floor, he’s helping the offense click.

Johnson has played some key minutes for Brooklyn alongside some of its stars, especially with Spencer Dinwiddie sidelined for almost the entire year. In doing so, he has changed his game to fit perfectly with his new collection of superstar teammates. Through May 10, none of Johnson’s numbers really jump off the page. But when you have teammates the likes of Kyrie Irving, Kevin Durant, and James Harden coupled with the sniper known as Joe Harris, you tend to leave the page jumping to them.

What the Numbers Say

On the year, Johnson is averaging 5.3 points per game on 38.7 percent shooting from the field and 35.7 shooting from three-point range. His 118.5 offensive rating is the highest of his career. Not too bad for someone averaging just over 17 minutes per game.

However, it’s the numbers beyond the numbers that highlight how Johnson has adapted to his new role with the Nets.

According to PBP Stats, Johnson has a “rim or three frequency” of 81.7 percent, the largest of his career. This basically means that just about all of Johnson’s shots are coming either at the rim on layups or short shots, or from beyond the arc. The rationale behind it isn’t too surprising considering the mentality of today’s analytically-driven NBA: he’s taking more higher-percentage shots or higher point total shots.

This also plays into shot quality. Just because a player is taking closer shots or bombing from distance doesn’t necessarily mean they are quality attempts. That isn’t the case for Johnson, however, who has a shot quality of 0.53—also the highest of his career.

Johnson’s three-point shooting makes up a majority of his game now. With the likes of Harden and Irving on the team, the need to facilitate isn’t required as much from a guy who was used to running the show in Miami and in the bubble for Brooklyn. Instead, Johnson now spends much of his time on the perimeter waiting for that eventual zip or swing pass. Of his 170 FG attempts, 124 have come from the three-point line. About 72.9 percent of them came either from the corner (24.1 percent) or above the break (48.8 percent).

From the corner, Johnson has connected on 17 of his 41 attempts, which averages out to about 41.6 percent. Above the break, Tyler’s average dips a bit to the tune of 33.7 percent on 28-of-83 shooting. It’s not ideal, but it’s still respectable enough for defenders to have to close out. For comparison, in other seasons in which Johnson has played at least 36 games, he has never had more than 50 percent of his total shots come from behind the arc. In 2018-19, when he split time with Miami and Phoenix, he had his next-highest total, 49 percent.

Remember when I said Johnson can just sit back and allow the dimes to come to him? Well, like a baby bird waiting for its mother to bring a worm, Johnson has been assisted on every one of his corner three-point makes and 92.8 percent of his makes from above the break, according to PBP Stats.

How the Nets Cash In

Below is a prime example of Johnson benefiting from the attention paid to one of the Nets’ many superstars. After Irving receives the handoff from Blake Griffin, he drives to the hoop, garnering the attention of three Phoenix Suns defenders—including Johnson’s man. Irving penetrates just enough, which allows an easy pass to Johnson for a corner pocket three-ball.

Although Johnson has been primarily catch-and-shoot this season, it doesn’t mean he’s forgotten what got him that $50 million contract a few years ago. In this clip, Johnson catches the ball on the wing for an isolation on Phoenix’s Cameron Payne. He drives left with his dominant hand and gets to his spot at the elbow, where he uses his strength to create just enough space to rise up and sink the jumper.

Injuries and questionable DNPs will limit Johnson to fewer than 40 games this season. However, it’d be shocking if he wasn’t a part of the playoff rotation, barring another injury. Mike James has played well in Johnson’s recent absence. But what Johnson offers for Brooklyn come playoff time is a veteran guard with playoff experience. Nets general manager Sean Marks may have envisioned Johnson as a cog in a playoff roster back in 2016, but now he gets to see his vision come to fruition at a fraction of the cost.