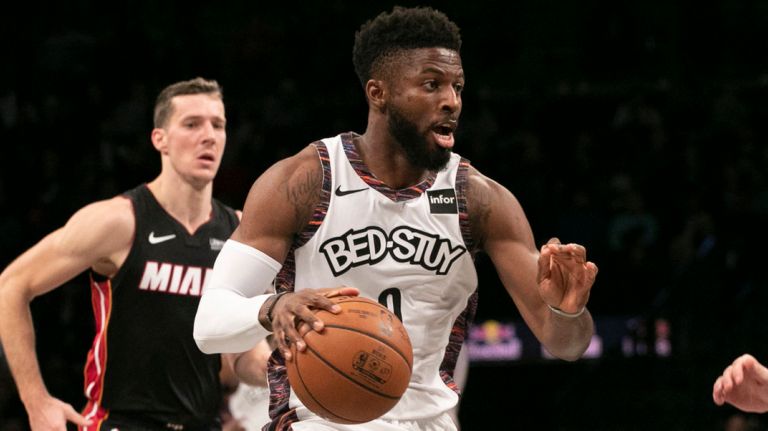 An Ode to David Nwaba

Immediately, it was obvious what happened. It was just the late third quarter of a December game in San Antonio, but that was the scene for the most gut-wrenching moment of the Nets season. David Nwaba, about to charge to the paint and fight for an offensive rebound, took one step and instantly crumbled to the floor. His writhing in pain left no room for ambiguity. Before the dazed Nets even finished suffering through the defeat at hand, it was confirmed: David Nwaba had torn his right Achilles. It still didn’t seem real, though. It’s hard to forget that moment still, as Nwaba lied face-up on the San Antonio hardwood, and every Nets player, coach, and fan shared the same thought process: “No, not him.”

To love the NBA is to subject yourself to unceasing randomness. You can wake up one day, and find out the Clippers and Nets are suddenly title contenders, or that J.R. Smith threw soup at his coach. No boundaries are sacred. Yet, David Nwaba’s achilles bursting into flames felt like a cruel glitch in the system. His basketball career, from the moment he spent $150 on a G-League tryout, was never promised. Every time Nwaba stepped on a court, he needed to prove himself. And with Brooklyn, his fourth team in 3 years, he was doing just that. All of a sudden, this dude who the Cavaliers passed on re-signing was the Nets’ bench spark-plug. Nwaba played every possession like his last, and Brooklyn’s defense improved with every extra minute he earned in Kenny Atkinson’s rotation. As is typical for Hallmark-made underdogs, he quickly became a Brooklyn fan favorite for his infectious energy. It felt like a match made in heaven, taken away in a heartbeat. Just two days earlier, he was the main reason the Nets pulled out a gritty, tough-on-the-eyes OT win in New Orleans. Nwaba played like a pig in slop, in the best possible way.

Brooklyn’s December 17th win in New Orleans was the highlight of David Nwaba’s season, and provided a glimpse of the long-term role he had a chance to carve out.

What differentiated his tenure with the Nets from his other NBA pit stops was his ability to shoot the ball. Albeit on low volume, he shot 43% from deep this year. It’s a lot easier to give minutes to a defensive agitator like Nwaba if you trust he is going to keep defenses honest:

A glimpse into David Nwaba’s shot chart makes it easy to see why the Nets were so keen on his development. The 27 year-old attempted 90% of his shots from within 5 feet, or behind the arc. While defense will always be Nwaba’s calling card, his devout adaptation to modern NBA offense this year kept him on the floor. But oh man, that defense:

It’s not often the highlight of an NBA game is a textbook defensive slide, but this effort against All-Star Brandon Ingram stayed with me. It’s indicative of how Nwaba can body up against a bigger offensive player and eventually force him to pick his dribble up. But, when Nwaba does get beat…

That’s when he uses his athleticism to make plays. This sequence highlights Nwaba’s immense talent as an on-ball defender, which starts with him thinning up and getting over the ball-screen. Staying attached to Ingram’s body without using his hands shows his great defensive technique, but what really pops here is his natural instincts. Seeing Ingram will have to adjust mid-air, Nwaba doesn’t jump until he extends the ball to the backboard, and gets up quickly enough to swat it. Nwaba has shown himself to be a maestro at using his instincts and athleticism to play much bigger than his listed frame of 6’5″, 218 pounds. Perhaps Nwaba’s best defensive asset, though, was his understanding of team concepts and willingness to fly around and create chaos for the opponent. He consistently showed the type of energy coaches adore, and it’s why Kenny Atkinson said he “was playing well as anyone on our team” at the time of his injury:

Energy, ultimately, is the key word for David Nwaba. It’s what he brought to the Nets whenever they looked sluggish and needed a boost. He willingly accepted the challenge of guarding the opponent’s premier wing threat whenever he was on the court, and his motor simply made plays happen. Not unlike a great point guard or ball-distributor, Nwaba elevated the play of whoever he shared the court with. It’s hard to watch sequences like this, and not see the other 9 guys on the court moving in slow-motion:

What is David Nwaba’s Brooklyn future?

As was expected, the Nets quickly waived David Nwaba after his Achilles tear to clear roster space, which ultimately granted them Chris Chiozza. Coming off one of the true career-altering injuries in professional sports, whether or not Nwaba gets another chance with an NBA squad, Brooklyn or not, remains to be seen. He certainly played well enough to earn a roster spot in 2020-’21, but it will depend on the journeyman wing’s health by the end of the summer.

Too much of the Nets’ roster construction for next year is undecided at this point, but Brooklyn will have a spot, probably deep on their bench, for Nwaba to return. As the Nets gear up for a championship run in 2021, Sean Marks‘ job will be to surround his superstar offensive talents with role players. If recent NBA trends are any indication, Marks will look to established veterans with playoff acumen and ties to his stars (hello, Tristan Thompson?) to fill those spots. But NBA teams can never have too much depth, and plus wing defenders will always be in demand. David Nwaba, health willing, should have a role on any NBA team by next winter. I, for one, hope it’s with Brooklyn.