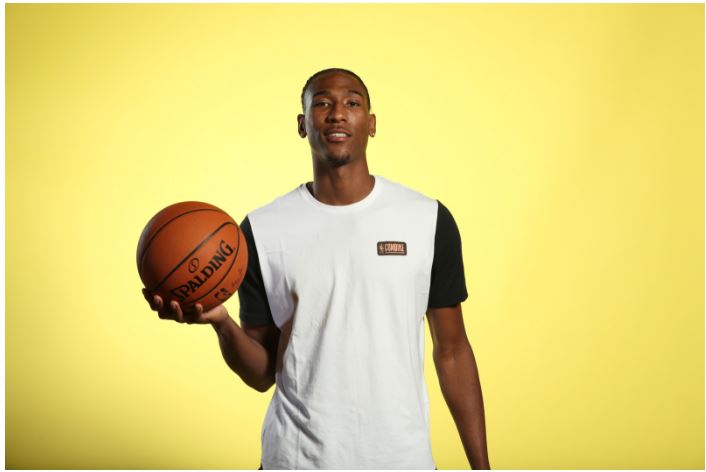 Melvin Frazier is one of the best defenders in this draft. With his unique blend of athleticism and will, he became an incredibly tenacious defender, albeit undisciplined. But will his defensive impact be enough to cover up his offensive shortcomings?

Because of his huge frame, smooth athleticism, and relentless motor, Frazier is one of the better and more versatile defensive prospects in this draft. Throughout his Tulane career, he was consistently one of the more aggressive defenders in the nation, capable of cheating further off his man than the average player to help and yet still able to close-out on and contain his man when the ball eventually came in his direction.

Just watch how well he moves his feet to contain a drive to the basket and force a pass:

Those kinds of possessions are the exact reason he’s being considered a potential first-round pick. And his prowess wasn’t just limited to isolation defense on the perimeter. At Tulane, he guarded every position despite having a relatively thin frame because of his elite combination of length, athleticism, and will.

Sure, there are times where he seems to be playing with his hair on fire and has mental lapses, but his potential is there. At the combine, Frazier tested as one of the best athletes in the class and even though combine measurable results are wonky, it confirms what the eye test has already told us.

It’s possible that with the right coaching staff and enough development in terms of basketball IQ on defense, he could be one of the best defenders in the NBA.

Landing in the right situation is absolutely critical for Frazier. While his defense is what will get him on the floor, he’ll still need to play on the other side and given how raw he’s looked in his four years at Tulane, he could be a major liability there. He shot a mere 31.2% from three for his career at Tulane and yes he improved to 38.5 percent in his junior year, but his free throw percentage–a more historically accurate indicator of shooting translating to the NBA–was just above 70 percent.

If he can’t be a reliable shooter and doesn’t have the tools necessary to create his own shot offensively, he’ll have a rough time staying on the court if he’s not an elite defender.

And there are times when his defense leaves something to be desired.

Frazier is one of the highest motor players in this draft and consistently gives everything he has defensively, but his lack of discipline often causes more than a few head-scratching moments. From hyper-aggressive close-outs which lead to easy blow-by’s for guards to odd decisions in help defense, he had more than enough moments in his career at Tulane to call his basketball IQ into question.

Maybe his improvement offensively was real this year and I’m simply wrong about his reliability, and maybe he improves his defensive IQ with experience at the NBA level. But if neither of those things end up being true, he’ll find consistent minutes hard to come by in the Association.

Frazier’s game is eerily reminiscent of OG Anunoby. Both players are monstrously athletic wings who play high-quality defense and have shown flashes on offense, but not consistently enough to actually capitalize on their enormous potential.

The Nets should welcome any wing who plays defense with open arms. They were one of the worst teams on that end of the floor last year and Frazier has the potential to seriously improve that standing. Even if he doesn’t improve much offensively, he still gives the team a usable back-up wing down the road.

If I were Sean Marks, I’d draft him if he falls into my lap, but giving up real assets for a player like Frazier is foolish. He’d fit fairly well on the team and take over the role Dante Cunningham occupied during the second half of last year, but that role isn’t worth any assets the team is willing to give up.