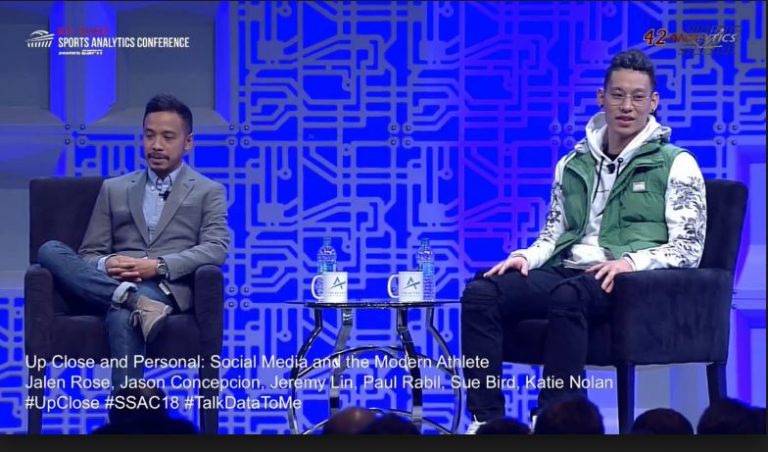 While rehabbing from the patella injury that has him sidelined for the remainder of the 2017-2018 NBA season, Brooklyn Nets guard Jeremy Lin has been doing his best to make a difference off of the court. Recently, Lin participated in two panels at the 2018 MIT Sloan Sports Analytics Conference in Boston.

Along with his cousin and his trainer, Lin arrived in Boston and jumped right into things. Before participating in his panels, Lin showcased his League of Legend skills as a player in the NBA LCS Celebrity Match.

Up Close and Personal: Social Media and the Modern Athlete

The first panel that Lin participated in was on a topic that Lin has much experience with. Lin is one of the more well-spoken players in the league and often uses his social media to communicate with fans and discuss issues relating to modern times, such as racism.

You can watch the full panel of Up Close and Personal below:

Lin’s second and final panel appearance was on a panel about the growth of analytics in Esports. In September of 2016, Lin partnered with the China Digital Group and Vici Gaming to launch a Dota 2 team named Team VJG. Lin himself didn’t put money into the team, but has acted as the brand ambassador for the team and appeared as the team’s face in the media.

Before launching the team, Lin talked about Esports in an article with ESPN:

“I’m looking into these opportunities, and it’s authentic, because I play the game three to four times a week and I have since I was 16 years old. I’ve been playing for the last 11 years, every week, several times, so it’s something I love doing. So I’m definitely trying to get into this space as much as I can.”

Per usual, Jeremy Lin was humble as ever and stayed behind after the panels to meet with fans. Many students from his nearby alma mater of Harvard attended the conference to see Lin.

The lineup after one of @JLin7's panels at Boston's @SloanSportsConf to meet him, featuring many upcoming college graduates who aspire to work in the sports industry. Jeremy played college ball at nearby Harvard. pic.twitter.com/J75tc9f5Wg