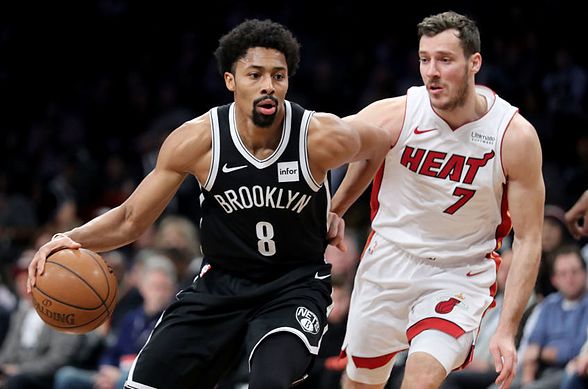 The Brooklyn Nets go into today’s matchup with Miami down one cornerstone player in Caris LeVert following his horrific looking injury from Monday’s game in Minnesota. Thankfully for Brooklyn, not only is LeVert’s injury not season-ending but it will not require surgery. So how do you move forward after losing one of the driving forces behind your early season success? One game at a time.

Brooklyn returns from their road trip to face the Miami Heat, a team they have matched up well within the past few years. Both Miami and Brooklyn have missed out on the Jimmy Butler sweepstakes following his recent move to Philadelphia and both teams are arguably better off for it. The Heat have lost three of their last four games to Eastern Conference opponents going into this game and are looking to rebound in a major way.

If Brooklyn is going to win this game they’ll need to learn to live without Caris LeVert, D’Angelo Russell needs to stay hot, and Brooklyn needs to win the turnover battle.

Learning to Live Without Caris

One of the toughest things for Brooklyn going into this game and the remainder of however long LeVert is going to be recovering is learning how to have success without LeVert on the floor. Caris LeVert has meant a lot to this team. They refused to move him for Jimmy Butler, they rely on him for crunch time baskets, and he spends a lot of time on the floor.

What Brooklyn needs to do is get some of the players that have been injured back into the fold. Both Allen Crabbe and Rondae Hollis-Jefferson have not quite looked themselves to start the season but that should change. Hollis-Jefferson has been looking more like himself as he gets more playing time but Crabbe has struggled off the bench. Neither player does exactly what LeVert does on the floor, but both players do something that LeVert also did.

Crabbe can stretch the floor and provide some offense while Hollis-Jefferson does a little bit of everything and can somewhat replace what LeVert offered as a facilitator and defender. Until LeVert gets back into the starting lineup, things are going to be tough for Brooklyn but the entire offseason plan was to acquire depth to whether these kinds of injury storms.

If Brooklyn is going to have immediate success following the LeVert injury, Russell is going to need to step up in a big way. All preseason involved Nets fans hearing about and seeing Russell workout and get into the best shape of his life but all of the early season talks has surrounded LeVert and his explosion onto the scene. While Russell has shown a lot of growth, he has yet to show consistency.

Russell is coming off of a game where he hit nine three-pointers and almost led Brooklyn over the Timberwolves. He is going to need to not only duplicate that performance but make it something he can do routinely if Brooklyn is going to have the same level of success that they had while LeVert was on the floor. Hopefully, Kenny Atkinson will allow him to take the reigns of this team now that LeVert is gone. So far it has been Atkinson’s rotations that have held Russell back the most this year.

Brooklyn Needs to Force Miami Turnovers and Prevent Their Own

Brooklyn controlling the ball is a key to victory in every game. Few things kill this team quite like turnovers. If the Brooklyn Nets are going to win this game, they’ll need to hold onto the ball and force as many turnovers as possible. Miami has a good point guard in Goran Dragic and a budding core of players. Disrupting Miami’s offense while running Brooklyn’s offensive gameplan is the best way Brooklyn can win this game.