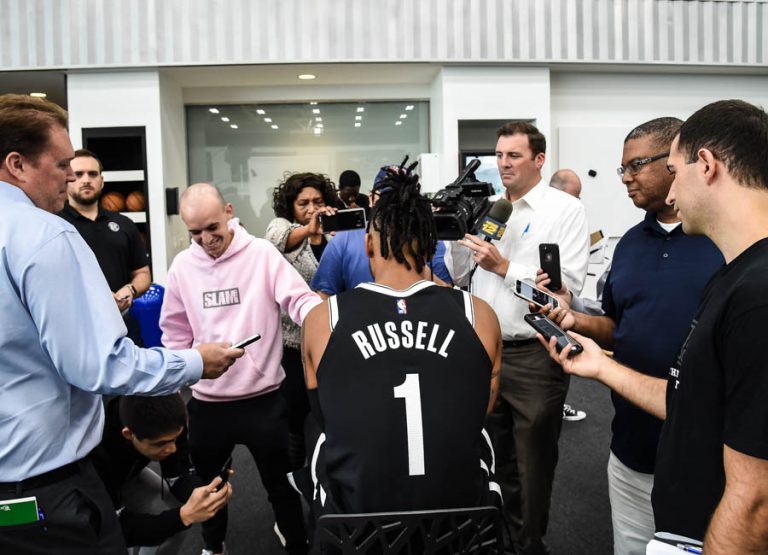 It was a pretty poor effort the Nets put up in their performance against the Miami Heat at home. Their defense left a lot to be desired as they allowed 6 of Miami’s players to notch double-digit points on the game. Miami was by no means lethal from the perimeter (8/29, 27.6%) but from the field overall they really made Brooklyn pay, shooting over 54% (46/85) for the contest.

The Nets will need to lift their effort and execution on both sides of the floor if they want to Net their seventh win of the season against the Wizards. Here are a few things to keep an eye for in the game.

The Form of Allen Crabbe

“I trust him. I love him as a player. I just think, ‘it’s him and it’s up to his coaches to help him.’ We have to find his niche. We haven’t found it yet so. We went looking, doing some different things, looking to play him with different line-ups.”

Kenny was democratic when discussing the struggles of Brooklyn’s highest paid player. The injury to Crabbe early in the season robbed him of the consistency and rhythm he craves.

Crabbe’s skill set has the potential to revolutionise Brooklyn’s offense, especially with one of their key players out for an extended period. While his defense has been solid, it’s what Sean Marks paid him for, his 3-point shooting, that’s going to reverse the fortunes of Crabbe’s early season slump.

The situation itself is very similar to what happened last season with the team. In that instance,e he was able to find a rhythm late in the season. Here’s hoping it doesn’t take that long as the team could sorely use his perimeter shooting.

LeVert’s absence was felt severely in the Heat game. The offensive rhythm they’d built over the early part of the season meant nothing as both the coaching staff and roster had to find ways to make things work on the fly. As Kenny said, it’s a work in progress.

Napier saw increased minutes as well (26) and with the inconsistent form of Crabbe at this point perhaps another change needs to be made. Russell seems to work best with another ball handler in the lineup, so inserting Dinwiddie into the starting lineup may need to be a consideration for Atkinson going forward.

Apart from a few junk time and spot minutes here and there, rookies Dzanan Musa and Rodions Kurucs, haven’t seen much time in a Nets uniform. Surprisingly, it’s been the second rounder, Kurucs that has earned the faith more of the coaching staff.

The energy Rodions provides spreads through the roster whenever he’s on the court. He plays with a fearlessness that few first year players have. He’ll take whatever shot is there for him and work his butt off on both ends of the floor. His overall size and ability to play the wing should earn him more court time as the Nets continue to manage their rotations going forward.

On the most recent Brooklyn Buzz, we discussed the possibility of Musa cracking the rotation more regularly. What he’s shown at the international level indicates he could be an intriguing option as a ball handler for the team.

To further his case, Musa’s shown decent form in the G-League. With Caris out for quite a while, Atkinson could do worse than throw some more minutes at his two talented rookies.