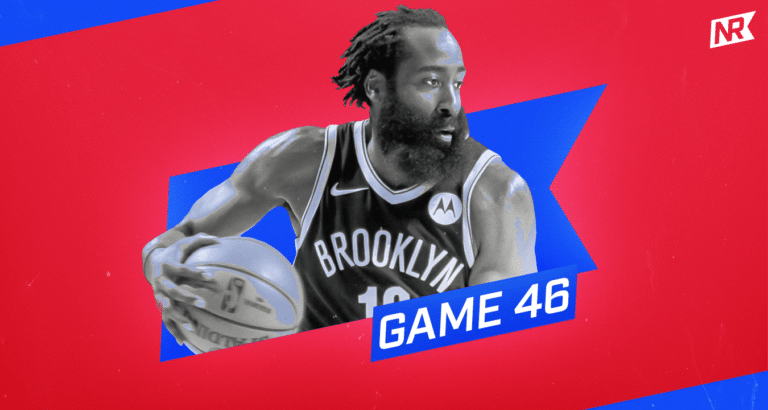 In James Harden’s return, the Brooklyn Nets got back in the win column on Friday night with an ugly victory over the pesky Detroit Pistons. As Brooklyn retakes second place in the East, the Nets return home with a short three-game road trip in the books. With the win, here are three takeaways for Brooklyn moving forward.

Following a thriller on Tuesday, each of Brooklyn’s last two contests have been, in a word, unpleasant. The 118-88 shellacking against Utah on Tuesday, while excusable considering the Nets’ available roster, left a bad taste in the mouth. Additionally, Friday’s win was nothing special from a team-wide standpoint.

It’s cliche and way overused, but this really is the type of game that championship contenders just find a way to win. Without two of the team’s best three players, another role player, in their third game in four days against a team they’d already played twice, the Nets grinded it out in Detroit

That said, there is something about the Pistons for Brooklyn. In three games so far this season the total point differential between the two squads is four points in Detroit’s favor. The Nets are 2-1 in those three contests but are yet to.

Maybe it’s Detroit’s rage for how Sean Marks stole Bruce Brown away for Dzanan Musa and a second-round pick is to blame for these baffling results, or perhaps they’re a result of Blake Griffin’s presence in the Motor City for the first time since his buyout.

Who really knows, but Brooklyn’s struggles with this squad comparative to the rest of the NBA is odd.

After taking a game to rest and recover from a sore neck and knee, James Harden came back with a fire in his belly in Detroit. Scoring a season and Brooklyn Nets career-high, the ‘Beard’ put up 44 points while he dished out eight helpers and nabbed 14 boards. His accuracy from deep is coming back around after some recent struggles as he knocked down a number of critical step back triples down the stretch.

Harden continues to build chemistry with his teammates as well. In fact, after the game, Blake Griffin remarked how his point guard “makes the game easier,” for everyone around him. That type of impact from a point guard is phenomenal and underscores Harden’s value to the Nets and his legitimate case for league MVP.

Looking at what Harden has done while his teammates miss games left and right is astonishing. He’s responsible for turning Brooklyn’s season around and has been an iron man. Playing 42 minutes against the Pistons, Harden’s supporting class is nowhere near the quality he expected it to be when he first arrived in Brooklyn.

Winning games with guys like Timothee Luwawu-Cabbarot and Tyler Johnson playing significant minutes in the backcourt alongside Harden is quite spectacular, no matter the opponent.

In his postgame presser, Harden summed up his play as well as anyone could.

“I feel like I am the MVP. It’s just that simple.”

It really is that simple.

Blake Griffin is a real weapon for the Brooklyn Nets offense

In just his third appearance for the Brooklyn Nets, Blake Griffin proved why taking a shot on him was a great move. Finishing with 17 points, the former Piston stuck it to his former franchise in the most appropriate way as he flushed home his first alley-oop in years on the same rim he failed to graze in his final stint with Detroit.

As the second-leading scorer on the night, Griffin displayed what he’ll bring to the table for this roster moving forward. Hitting the two long balls he attempted, the long time Clipper has reinvented his game. His relentlessness offensively is admirable and his willingness to play for others is encouraging considering the role he’ll adopt once Brooklyn is fully healthy.

It’s obvious there are no issues with his ego and that, if anything, his personality will be a plus in the locker room. That only underscores what a solid pickup he was after being bought not two weeks ago as Griffin now establishes himself as a Net/