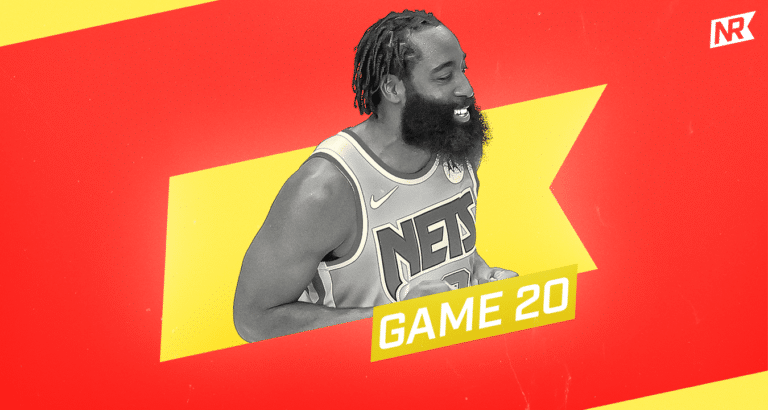 Three Takeaways From the Brooklyn Nets’ Win Over the Atlanta Hawks

In an overtime thriller, the Brooklyn Nets pulled out the win against a blossoming Atlanta Hawks squad 132-128 on Wednesday night.

With the win,  the Brooklyn Nets extend their winning streak to three games. As such, I’ve got three big picture takeaways for the Nets moving forward.

While there have been some noticeable bumps along the way, the dominance of the Durant-Harden-Irving trio appears to be upon us. Against Atlanta, the three of them combined for eighty-nine points, twenty-four assists, and twenty rebounds on 52.3 percent (33-63) shooting from the floor and 47.4 percent (9-19) shooting from behind the arc.

They each had their own stretches where they took the game over. That potential for those three to simply take the game into their hands is what’s so enticing and exciting about this team. Now, seven games into the James Harden-era in Brooklyn, the Nets are 5-2.

A near-collapse in the final minutes of overtime

While Brooklyn still got the win, from the 2:45 mark of overtime until James Harden knocked down two free throws with 4.6 seconds left, the Nets went completely scoreless. That inability to close down the stretch is concerning especially considering the late-game abilities of the Harden, Durant, and Irving trio. In fact, coming into the game, those three were leading the league in average fourth-quarter points per game.

Unfortunately, the failure to put teams away has become a somewhat common theme for Brooklyn this season. It’s a bit of an anomaly, as one would expect the big three to play off each other effectively. The Nets looked to expose Trae Young in the final minutes as whoever Young was guarding would set a screen for one of Harden, Durant, or Irving (but mostly Harden) as Brooklyn attempted to force the switch. Eventually, Atlanta got wise to the strategy, and began switching off-ball before the screen was set to disrupt Brooklyn’s flow.

Of course, as this roster plays together more and more, their chemistry and the feel of these late-game scenarios will become fluid. But, as of now, Steve Nash and his staff still have some tinkering to do to determine how they’ll be most effective when the clock runs low.

While they struggled to produce in the first half, Brooklyn’s complementary players came up big in the second half. Off the bench, Jeff Green — who scored eleven points and corralled seven rebounds — provided a meaningful spark with a number of rim-rattling dunks. Scoring 12 points, Bruce Brown played through first-half foul trouble as a critical component of Brooklyn’s defending of Trae Young. He also gave the offense a lift in the second half as he worked as a screener who found opportunities to utilize his deadly floater off of rolls to the paint. DeAndre Jordan, while dependent on others to create for him offensively, still finished with 11 points, seven rebounds, and three blocks. Jordan isn’t going to win Brooklyn any games. But he’s a fine filler option for now.

And, last, but by no means least, Joe Harris. As he always does, the Virginia-product did everything that was asked of him against Atlanta. Whether that be face guarding Trae Young in the final minutes of the fourth quarter and overtime, or to be the primary screener down the stretch as he forced the Atlanta defense to leave Brooklyn’s stars in isolation as a result of his magnetism as a shooter, Harris did everything.

Except, well, making a three-pointer to extend his streak of games with a made long-ball to eighty. Nonetheless, even when Harris scores only six points, he’s an essential component of this Brooklyn squad.

While all those contributions were critical, it’s also clear that this roster still needs shaping. There’s really only a seven-man group that can be consistently relied on to produce on both ends. With the acquiring of Norvelle Pelle and the rumors circulating of potential buyouts of guys including Andre Drummond and Javale McGee, we know that Sean Marks is working his magic to try and complete this team. The decisions made to fill Brooklyn’s two remaining roster spots will be. Obviously, when the playoffs roll around, the rotation will be shortened. But, until then, the Nets need some more capable bodies who can ensure that the stars aren’t dead on their feet when the playoffs finally do roll around.