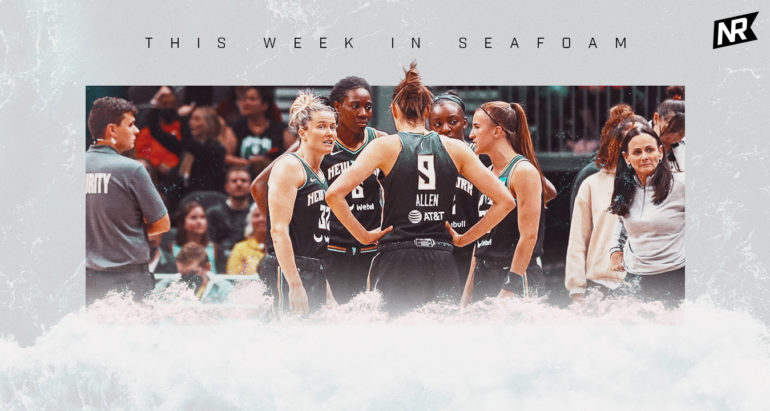 This Week in Seafoam: The Struggles Continue For New York

Another week of New York Liberty basketball has passed.

Once again, the Liberty failed to earn a victory. The team now sits at 1-7 on the season, in sole possession of last place in the WNBA. After opening the season with a surprising win over Connecticut, things have fallen apart.

In this edition of This Week in Seafoam, we’re going to talk about what’s going wrong in New York…with, of course, a little side of positive talk about Han Xu.

If there’s one good thing to take away from this week, it’s the same good thing there was two weeks ago, when the Liberty also went 0-3: Han Xu.

Han continues to see her role on this team increase. And so far, that’s been about the only good thing going for New York.

The Liberty offense is about eight points better per 100 possessions with Han on the floor. The defense takes a hit with her on because she’s definitely not as versatile on that end as Stef Dolson and Natasha Howard are, but there are ways New York could plan around her limitations as a defender in space. Less switching, for instance.

Part of it is that Han’s showing that she can score from anywhere. Per WNBA.com’s shot tracking, she’s shooting at least 50 percent from every distance zone except 10-14 feet, where she’s 0-for-1. It’s a small sample, but Han is shooting 53.3 percent from less than five feet while also shooting 6-for-11 from outside of 15 feet.

The thing that stood out when Han was last in New York was her shooting touch, but she didn’t have the strength to stay on the floor long enough to really showcase that touch. Things have changed, though. Now, Han’s combination of height and shooting have made her a real weapon for this team. Dare I say it’s time to start her? (The team has a -5.56 net rating when she shares the floor with Sabrina Ionescu, which is pretty good when you consider how bad the team has usually been this season.)

Instead of just talking about all the issues going on with the Liberty, I decided to ask Twitter for some specific things they wanted addressed. Let’s talk about some of these things.

I think it’s a little of both.

In terms of scheme, I think Sandy Brondello might be trying a little too hard to make big lineups work. I mean…per PBP Stats, Dolson and Han have played 14 minutes together, and while I’m sure part of that is necessity due to injuries, I still don’t think that’s the ideal thing to be doing (and that lineup has a -20.88 net rating).

The fact that the Liberty have been notably better when only one of Dolson and Howard is on the floor is also notable:

The offense in particular really struggles with Dolson on the floor. Putting Howard at the five might not be ideal, but the team is better on both ends of the floor when New York does that.

If New York ever gets healthy, the offense should be better. If it isn’t, then we can start really worrying about schemes and coaching and all of that.

One of my biggest takeaways this season is that Sabrina Ionescu needs another playmaking guard beside her. The Betnijah Laney injury has essentially meant that Ionescu is the only ball-handler on the floor for much of the time and, well… that’s not working.

I firmly believe that with her shooting ability and her passing skill, Ionescu could be one of the best two-guards in the W. And in that role, I think you can win if she’s your best player.

But you need a quality starting point guard. It’s telling that her most efficient season at Oregon came in the year that Minyon Moore was a Duck; putting Sabrina at the two allows her to focus more on the things she’s really good at, plus it would mean New York would have arguably the best passing shooting guard in the league.

Of course, the roster construction of this team right now limits their ability to do this. The only point guard on the roster is Crystal Dangerfield, who is on a hardship.

The limited sample size of Ionescu and Dangerfield playing together is encouraging… sort of. In 31 minutes, the team has a -9.99 net rating when they share the floor, which is bad, but not as bad as the -15.69 net rating when Ionescu is on the floor without Dangerfield.

Dangerfield isn’t the ideal point guard to play with Sabrina. Ideally, you want the team to find someone, whether via the draft or free agency, who has more size.

And you don’t even necessarily need to add a true point guard: a combo guard in the Courtney Williams vein would take pressure off Ionescu, too. A lineup that looked something like this—Han, Howard, Laney, Ionescu, [quality point or combo guard]—has potential. Ionescu is the best player in that lineup and I think you can win games like that, especially if you have a solid bench.

(As for the other two questions, while the team could have added another hardship last week, Lorela Cubaj will be back for Wednesday’s game, so they’d no longer be eligible. And as for the Dolson question, I really don’t have an answer for that. Dolson’s been disappointing and I think part of that is her fit with the team. Dolson’s the kind of player who works well with a good team, where she can just focus on the things she does well. New York isn’t good enough at this point for Dolson, if that makes sense.)

Sure, that’s a cop-out, but the No. 1 thing—that’s actually plausible, at least—that would help New York would be to have a healthy Betnijah Laney.

But beyond that, I think the answer might be to get Rebecca Allen and Sami Whitcomb moving around more off the ball. The team runs off screen plays 4.8 percent of the time per Synergy, which ranks ninth in the WNBA. The team ranks last in points per possession off of those plays, so it might seem counter-intuitive to do more of that, but I think it could be a good way to get Allen and Whitcomb going, even though both are struggling so far when shooting off screens.

Can the Liberty finally get that second win? Here’s what the schedule looks like over the next week:

The Mystics game is a loss. But the other two…could be wins for New York, maybe?

The Fever game is the best chance the team has. The first meeting of the two sides ended up going to overtime, where the Fever won 92-86. Sabrina Ionescu had 31 points and seven assists in that one.

Indiana’s defense has struggled, which should offer the Liberty offense a chance to get back on track. Of course, with a team that’s as turnover prone as this one, any game could turn into an offensive disaster, so just because Indiana allows the most points per game in the W doesn’t mean that the Liberty are going to actually be able to score against them. I mean, New York had a seven-point quarter in the first meeting.