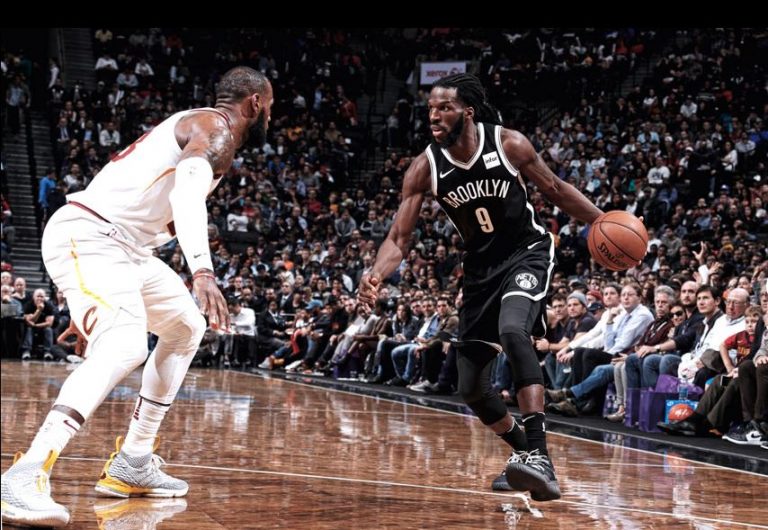 After two lost seasons in Toronto, DeMarre Carroll reunited with former coach Kenny Atkinson. The results are palpable as the forward revived his career and comfortably assumed the role of leader and arguably the most consistent contributor of the Brooklyn Nets.

DeMarre Carroll turned his career around as a member of the Atlanta Hawks. After bouncing between teams during his first three years in the league as a role player, Carroll started all but one of his games in Atlanta. Carroll filled in perfectly around Atlanta’s All-Star frontcourt of Paul Millsap and Al Horford. Carroll would spot up behind the arc on offense and knock down triples. On defense, Carroll guarded opponents so intensely that he earned the nickname Junkyard Dog 2.0.

The original Junkyard Dog Jerome Williams had his best year as a member of the Toronto Raptors. Masai Ujiri clearly hoped the same would happen with the second coming of the Junkyard Dog. Ujiri inked Carroll to a four-year, $60 million deal with the Raptors after Carroll’s stellar 2014-15 campaign in Atlanta.

Sadly, Carroll never worked out in Toronto. Ujiri had to attach two 2018 picks (including a first-rounder) just to dump Carroll on the Nets. However, Toronto’s loss ended up being Brooklyn’s gain. DeMarre Carroll has arguably been the Nets’ most consistent player this season, averaging 13.7 points, 6.7 rebounds, and 2.0 assists in a team-high 70 starts. While Carroll will probably never again reach the heights he attained in Atlanta, DeMarre has been far more than just a dumped salary in Brooklyn.

The NBA is littered with players who refuse to play to their skillsets. Think of Dwight Howard refusing to run the pick-and-roll in Houston despite having the tools to be an unstoppable force rolling to the rim alongside James Harden. Think of J.R. Smith or your chucker of choice throwing up hopeless bricks instead of passing to their teammates. Think of Isaiah Thomas switching onto Dirk Nowitzki and trying to guard him in the post.

DeMarre Carroll is the opposite of that kind of player. He knows he defends well and shoots well on open triples, and does not try to reach too far beyond his comfort zone. The irony of DeMarre Carroll’s departure from Toronto is that he would fit in extremely well with their new more ball movement-focused offense from this season than he ever did during his two seasons in the north.

Under former Hawks assistant coach Kenny Atkinson in Brooklyn, Carroll is back in the same role in which he succeeded in Atlanta. On offense, Carroll is taking nearly 50 percent of his shots from long range–49.6 percent to be exact. Carroll is knocking down those shots at a 37.2 percent clip, the second-best mark on the team among players with more than 100 shots from beyond the arc. Carroll’s high basketball IQ is on full display when he gets open from deep–he is incredibly adept at slipping out to the three-point line whenever a teammate sucks in the defense:

On the defensive end, Carroll is still one of the league’s better forward defenders. His 6’8″ frame was a bit undersized for a power forward when he entered the league but is now perfect for switching pick-and-rolls on defense. DeMarre has also contributed on the glass to compensate for Brooklyn’s lack of true bigs–his 6.7 rebounds per game are a career high, and nearly doubles his 3.8 rebounds per game mark from last season. Carroll ranks 17th among 89 qualified small forwards in Defensive Real Plus-Minus per ESPN. The Nets allow two more points per 100 possessions with Carroll on the bench than they do with him on the floor.

The Brooklyn Nets would have come out on top in terms of the DeMarre Carroll trade if Carroll never stepped on the court. Sean Marks took a relatively unimportant asset (a portion of the Nets’ salary cap space for this season and next season) and converted it into two important ones (Toronto’s first-round pick and a valuable second-round pick from either the Lakers or the Magic). Most importantly, DeMarre Carroll is on pace to break his previous career high in games played and started while steadying the Nets on both ends of the floor.

For a player that the team received in a salary dump, DeMarre Carroll’s success in Brooklyn has been nothing but pure upside.