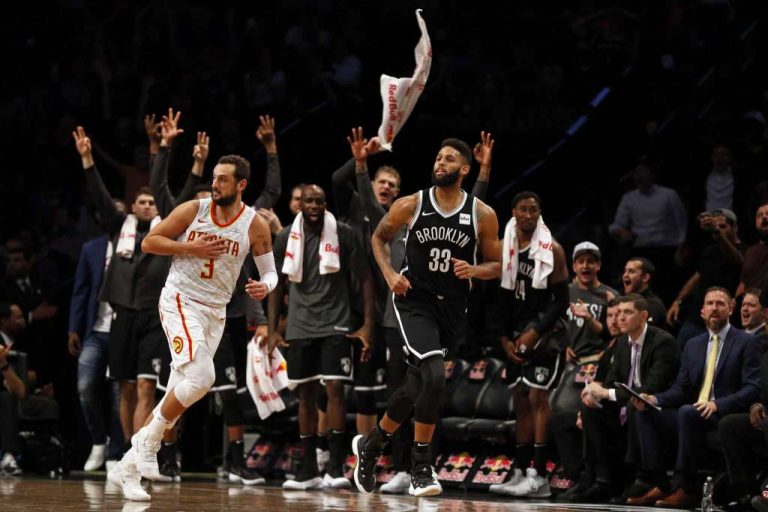 After splitting their first two games, the Brooklyn Nets faced the Atlanta Hawks in Barclays Center on Sunday afternoon. They walked away with a 116-104 victory marked by a balanced offensive attack, as 11 players scored for the second straight game. Furthermore, six players scored in double figures, but only one player notched more than 17 points.

More importantly, the Nets fought back from a rough first quarter and dominated the third quarter — something the team struggled with repeatedly last season. While the team played a great all-around game, here are four players who stood out in a Sunday afternoon victory that pushed the Nets above .500 for the first time since 2014.

Caris LeVert earned his first start of the season in this game. He showed why he earned that nod, as he put together an impressive display in this game. LeVert drove to the rim repeatedly and scored around the basket. Whenever he did not put the ball in the hole, he got to the stripe to make up for it. He was also effective on the defensive end, both in terms of takeaways and in terms of helping to limit Atlanta’s perimeter play on offense.

The Nets sophomore finished the game with 16 points on just nine shots and 6-of-9 shooting from the free-throw line, four assists, six rebounds, and a career-high tying three steals. With Jeremy Lin out for the rest of the season, LeVert will probably return to the starting job he held down the stretch of last season.

DeMarre Carroll Still Has It

When DeMarre Carroll played for the Atlanta Hawks, he was an archetypical 3-and-D player. Carroll shot 37.9 percent from deep on four attempts per game during his two years in Atlanta and was referred to as Junkyard Dog 2.0 for his hustle and defensive intensity.

While that might not have carried through during his two disappointing and injury-plagued years in Atlanta, Carroll has been a different player in his first three games in Brooklyn. Carroll finished the game with 17 points, including shooting 2-of-5 from deep, and contributions across all areas of the game and the box score. He might not live up to his contract in the long-term, but he has so far in three impressive games.

Jarrett Allen has been throwing back shots for the Brooklyn Nets since the early days of Summer League. With that in mind, his shot-blocking prowess should not be a surprise for Nets fans. Still, his display of rejection power in this game was somewhat shocking.

Allen blocked four shots in just six minutes of playing time in the first half. While he did not block any shots in a slightly longer second half run, Allen has now proven he can turn away looks at an NBA level, despite his youth and inexperience. Although the rest of his game still needs polishing, the rookie has now shown he can be a problem defensively for opponents in the paint.

The Brooklyn Nets only had one player who scored more than 17 points in this game, but it was not leading scorer D’Angelo Russell (who still had an impressive night with 16 points and 10 assists). That honor goes to Allen Crabbe, who finished with 20 points on 7-of-12 shooting and a 4-of-7 mark from long range.

Crabbe played 26 minutes in this game and appeared to be far more comfortable in a bench role. His lone start this year against the Magic was also his worst of the short season thus far, and he has been effective in each of the last two years in Portland as a heavy-minutes bench player. With LeVert’s impressive game and Crabbe’s solid scoring off the bench, Kenny Atkinson will likely continue with this new starting group going forward.