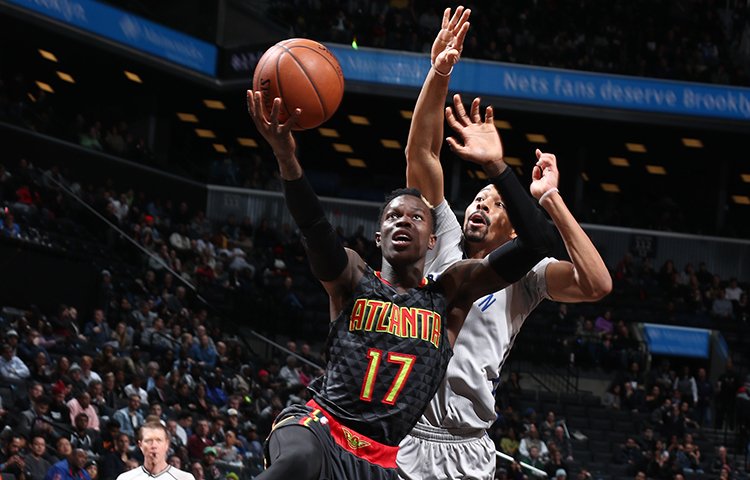 BROOKLYN, NY - JANUARY 10: Dennis Schroder #17 of the Atlanta Hawks goes up for a lay up Brooklyn Nets on January 10, 2017 at Barclays Center in Brooklyn, New York. NOTE TO USER: User expressly acknowledges and agrees that, by downloading and or using this Photograph, user is consenting to the terms and conditions of the Getty Images License Agreement. Mandatory Copyright Notice: Copyright 2017 NBAE (Photo by Nathaniel S. Butler/NBAE via Getty Images)
Home
Brooklyn Nets
Brooklyn Nets Game Threads
Sandy Mui

Week 1 of Brooklyn Nets basketball is wrapping up, as the Nets gear up to take on the Atlanta Hawks. Brooklyn is coming off its first win of the season, a 126-121 victory over the Orlando Magic on Friday. 11 different players contributed in this matchup, with six finishing in double figures. Not a bad team effort as multiple players shined for various reasons, though the Nets will surely have to address their turnover issue at some point — they cannot afford to commit 18 every night.

Meanwhile, Atlanta is looking to bounce back from a loss to the Charlotte Hornets, another contest that took place on Friday. As expected, the Hawks have largely relied on Dennis Schroder, who is in his second season taking the reins as Atlanta’s starting point guard. In two games, the 24-year-old is averaging 26.5 points, six assists and 1.5 steals in 33 minutes per game.

It should be an exciting matchup between youthful guards Schroder and D’Angelo Russell since Russell will be seeing a lot of minutes at point guard in the absence of Jeremy Lin. (Got to cut down on those turnovers, though.) Spencer Dinwiddie, Brooklyn’s backup point guard, will also be up against Schroder at some point. The Mayor provided a nice spark off the bench on Friday, especially toward the beginning of the final quarter.

Much like the Nets, the Hawks are expected to be terrible this season. They look extremely different compared to when Kenny Atkinson was still an assistant there. (R.I.P. 2014-15 Hawks that had Paul Millsap, DeMarre Carroll, Al Horford, Shelvin Mack and Jeff Teague.) Now, in their first season without Millsap, of course, the Hawks are expected to decline. ESPN’s Kevin Pelton marked the Hawks down as the team finishing dead last with 27 wins (based on ESPN‘s real-plus minus). The Westgate Las Vegas SuperBook has Atlanta’s over/under just above the Chicago Bulls’, at 25.5.

Where the Hawks have the advantage is size — Dewayne Dedmon (7 feet), Ersan Ilyasova (6-foot-10), Mike Muscala (6-foot-11). Sure, the Nets have two 7-footers in Timofey Mozgov and Tyler Zeller, along with 6-foot-11 rookie Jarrett Allen, but only one of the three has received significant playing time thus far. Allen was impressive in his Nets debut though, and Brooklyn will surely be emphasizing player development once again, so he should get some more court action moving forward.

“Small ball” was especially an issue for the Nets in their final preseason matchup against the Philadelphia 76ers, so they will have to find other ways to avoid being exposed on the interior. (To their credit, against the Magic, even in a 41-point, 12-rebound performance by Nikola Vucevic, they managed to come out on top. Various players contributing in a variety of ways could give Brooklyn the edge once again.)

One last storyline and perhaps the most obvious to watch for: Will Brooklyn be able to notch their first win streak of the season? The Nets did not win two consecutive games until March 23 last season, so they will already be five months ahead if they accomplish this on Sunday.