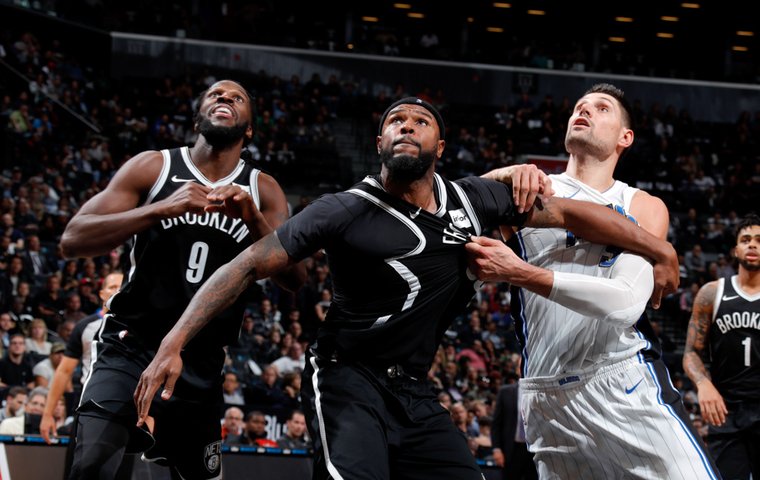 BROOKLYN, NY - OCTOBER 20: Trevor Booker #35 of the Brooklyn Nets boxes out against the Orlando Magic during the game on October 20, 2017 at Barclays Center in Brooklyn, New York. NOTE TO USER: User expressly acknowledges and agrees that, by downloading and or using this Photograph, user is consenting to the terms and conditions of the Getty Images License Agreement. Mandatory Copyright Notice: Copyright 2017 NBAE (Photo by Nathaniel S. Butler/NBAE via Getty Images)
Home
Brooklyn Nets
Sandy Mui

Brooklyn Nets basketball returned to the Barclays Center on Friday night, as the Nets faced off against the Orlando Magic in their team opener. Despite being without their lead point guard, Jeremy Lin, the Nets still managed to sneak away with its first victory of the 2017-18 season. It was an excellent display of team basketball Friday night, with 11 different Nets contributing to the scoreboard. The turnover count (18) was still high, but this time, it was not enough to let the game slip out of Brooklyn’s fingertips. Quite fittingly, this edition of game notes and observations will highlight five different Nets who made a huge impact in the home opener.

Honorable Mention: Joe Harris, 10 points on 4-of-6 shooting from the field and 2-of-4 shooting from downtown. With Sean Kilpatrick still not garnering a second in the Nets’ rotation, it appears Harris has solidified his place as the Nets’ backup hot hand.

The Nets’ No. 22 pick in this year’s draft, Jarret Allen, finally suited up in a black-and-white uniform, and boy, did he make a statement. By stepping on the court in Brooklyn’s second game of the season, Allen became the second-youngest Net to appear in a game, trailing behind Derrick Favors‘ Nets debut on October 27, 2010, by 78 days in age.

The rookie immediately caught Nets fans’ attention by starting his Nets debut with two consecutive dunks and a block. All three plays occurred within 30 seconds toward the end of the second quarter. Plus, the rook had another earth-shattering hammer in the fourth. Not too shabby for a guy’s first game in the NBA, especially with size always being a concern for the team. Allen even got some action in crunch time (14 minutes for a debut is quite a lot).

Jarrett Allen gets the dunk on one end & the block on the other for the @BrooklynNets! #NBARooks pic.twitter.com/Ycu8Uo57c2

“Big Jay” definitely knew how to make fans excited in the first home game of the year. If he can continue to throw it down and use his incredible 9-foot-1 standing reach like he has, then man, are fans in for a treat (and not just because there are 10 days left until Halloween).

In the second half of last season, Trevor Booker began coming off the bench as the Nets began the “Rondae Hollis-Jefferson at the 4 experiment.” One noticeable stat from last season was that while Booker was used by Brooklyn both as a starter and reserve, his production was not much different in the roles. As a starter, he averaged just five minutes more per game and posted 9.8 points and 8.6 rebounds. Off the bench, he actually averaged more points — 10.2 — and grabbed 7.2 boards per game.

Brooklyn has continued on with Hollis-Jefferson as the starting power forward, which places Booker once again in a reserve role. It was not surprising at all that the 29-year-old power forward was the key cog that made a difference. The Nets got off to a slow start against the Magic, but it was Booker’s presence and production that quickly brought the team back into the game (and ultimately take the lead after the first 12 minutes). He notched four rebounds, four points and an assist in just six minutes of action in the first quarter. By the end of the night, Booker tied two other Nets as the leading scorers with 17 points and also grabbed 11 rebounds. This is already the second consecutive double-double for him this season, making Booker the first player since Kevin Love in 2009 to post double-doubles as a bench player in each of his team’s first two games of a season.

Spencer Dinwiddie Was Exactly What the Nets Needed at Backup PG

When things get tough, call The Mayor, and he will show up. Booker was one of the highlights off the Nets’ bench, and Spencer Dinwiddie was another.

It was a tight game for most of the night, and the Nets found themselves down by two at the start of the fourth, thanks to a Jonathon Simmons trey at the horn. If you look at the play-by-play for the first 25 seconds of the final period, you’ll see Dinwiddie’s name for two missed shots, two rebounds and a successful tip layup. His name appears for a majority of the first four minutes of the fourth, as he contributed seven points and three rebounds during that timeframe. At that point, the Nets held a slight 102-100 edge. This is exactly the kind of spark Brooklyn needs from its reserves.

Following all of Dinwiddie’s hustle all over the floor in the fourth, NetsDaily’s Billy Reinhardt reminded us of the fact that fans were actually complaining when the Nets replaced Yogi Ferrell with Dinwiddie last season. It is quite funny to see 61 games in a no-pressure environment can change fans’ minds and help a 24-year-old progress.

DeMarre Carroll “Still Got it”

Heading into the 2017-18 season, there was the question of who would be starting on the wings, and DeMarre Carroll was not on everyone’s minds. That is not to diminish Carroll’s game and veteran presence; a Caris LeVert–Allen Crabbe duo on the wings just sounded more appealing to help the Nets progress, and it was unclear if Carroll still had anything left in the tank at 31 years of age. Sure, there were high hopes that he was expected to have a bounce-back year under Kenny Atkinson’s offense — a system that is not only revolved around one or two players, unlike Toronto’s — but doubts still remained. At the very least, though, he was expected to serve as a leader on this budding, young Nets team (a motif that was very popular during Nets Media Day). And, Nets fans could be relieved at the idea that Brooklyn only gave up Justin Hamilton to take on Carroll’s immense contract, on top of gaining two draft picks in the process.

In Brooklyn’s first two games, Carroll has already begun to dispel ideas that he is only a salary dump on this team. Surprisingly (or unsurprisingly, depending on how you look at it), the Nets have started Carroll in both games already, with LeVert coming off the bench. “Junkyard Dog” was especially impressive against the Magic on Friday, scoring 17 points on 6-of-9 shooting from the field (including 3-of-4 from behind the arc) and grabbing eight rebounds. It may be early, but it appears Carroll and Atkinson are a match made in heaven once again; after all, Carroll’s best production came during his Atlanta Hawks days, where Atkinson served as an assistant head coach.

The “Rondae Hollis-Jefferson at the 4 experiment” lives on, and with how it went Friday night, it just might be here to stay. Hollis-Jefferson contributed from both ends of the floor in the Nets’ victory, finishing with 15 points on 5-of-10 shooting from the field, as well as three rebounds, three (three!) steals and three (three again!) blocks. Two of his points, one of his steals and one of his blocks were part of an 8-0 Brooklyn run in the third quarter that helped the team regain a 70-66 advantage.

In the last game, the third-year player showed he can knock down his free throws (a perfect 8-of-8). In the home opener, he displayed the defensive presence he has always had (but with more clamor) and the offensive game he continues to develop. Not to mention, he also survived a scary fall in the fourth (my heart nearly stopped).