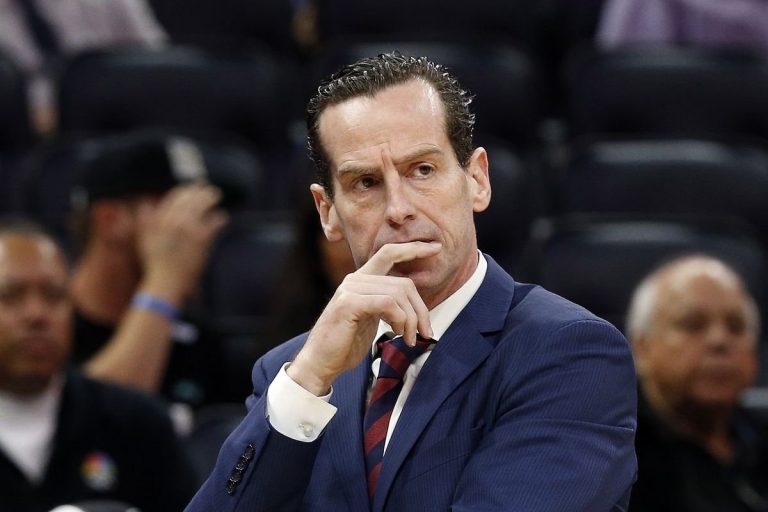 Coach Profile: The Good and Bad of Kenny Atkinson Part 1.

Normally at Nets Republic we analyze Brooklyn players but this time we’re going to delve into the man at the head of it all, coach Kenny Atkinson. Atkinson has been at the helm of the franchise for the past two franchise and despite the win-loss record (48-116, .293) he’s done some great things. His history as an assistant with Atlanta and New York was as a player development coach and he brought that and then some with him to the Nets.

“When I look back and I look at the job Kenny has done, I say look at our players that have improved over the course of the last two years.”

It was something that was almost inevitable if you go by what he said to Sarah Kustok in one of his first interviews as head coach.

Per Basketball Reference, over the past two seasons 25 Nets players have played 16 minutes per game or more. Of all those players you could argue apart from maybe 3 or 4, that all of them have made improvements in some area of their game. Even the lesser lights like Quincy Acy and Tyler Zeller were able to add the 3-point shot as a new element to their skillset.

The young players are obvious (Dinwiddie, Allen, LeVert) but you could equally argue Atkinson and his team have had as much impact on players with more experience. DeMarre Carroll had a career year across the board last season and Joe Harris broke out to become a legitimate rotation piece. Before becoming a Buck, former Nets great Brook Lopez was revitalized as a stretch center thanks to the nous of coach Kenny.

Praise From Players and Peers

Being respected and revered by those you work with and who are your adversaries is half the battle to becoming an established coach in today’s league. Once you form a reputation for yourself it’s hard to shun. Atkinson has already stamped his authority in only two short seasons.

The relationship between a franchise player and coach is the most important bar none. Fractured relationships up top generally lead to coaches losing their jobs (see Mike D’Antoni in New York, David Fizdale in Memphis, etc). D’Angelo and Kenny are on good footing as D’Angelo Russell told Nets Daily.

“He’s been amazing since day one with me as far as letting me run the team, letting me quarterback things. I turn the ball over and he lives and dies with it.”

When it comes to the tougher moments, Atkinson’s not afraid to shy away from them. Young utility Caris LeVert respects that.

“At the end of the day, we both want to do the same thing. We both want to win games. I want to be the best player I can be, so I know he is going to be hard on me.”

Outside the organization, Atkinson has garnered plenty of love as well. Four of the game’s best coaches all have expressed their admiration of coach Kenny. Warriors head coach, Steve Kerr remarked on the Nets style of play and culture.

Clippers coach Doc Rivers also made note of the team’s willingness and execution.

“I just love him as a coach. I think he does a great job. His team executes, they play hard, they play together. I don’t think people appreciate how hard that is when your team is not winning to get guys to play together.”

Those comments were solidified by Rockets coach Mike D’Antoni.

“Brooklyn isn’t going to beat themselves, we’ll have to beat them. I think at the end we did. They’re well coached and they do a good job.”

“The Nets will be closer to being where every team wants to be, and that’s competing in the playoffs. You can tell the decisions he’s made, you can tell by Kenny demanding and being fair at the same time – working with these young kids. It’s going in the right direction.”

Just because he’s respected by his fellow coaches doesn’t mean Atkinson is the perfect coach. He still has a ways to go to being considered in the same vein as those who complimented him. Some of that has to do with success on the court but also with how he manages and implements his principles.

Kenny Atkinson loves to spread the love when it comes to distributing minutes across the roster. As fellow Nets Republic writer Francis Adu wrote, “in the two seasons, Kenny Atkinson has held the head coaching role for the Brooklyn Nets, not a single Net has averaged 30 minutes per game.”

Why does Kenny Atkinson stagger his minutes across the roster so heavily? In the time he’s helmed the team there have been injuries aplenty so there’s no doubt that plays a part. When Russell was returning from injury the coach even admitted fault on his own part to how he was utilizing him.

“I don’t think I’ve done a great job of getting D’Angelo with that first unit a little more. I think it would help us, we’d be better. And keep some of our starting unit with that second group. I’ve been maybe playing them too isolated.”

It’s refreshing to hear a coach admit fault and it’s obviously not just one-sided, as injury precaution and earning those minutes is on Russell’s shoulders as well. Next season it’d be very surprising if we don’t see a healthy Russell play anywhere between 29-32 minutes.

There was criticism throughout the season of how Jarrett Allen wasn’t earning more playing time, especially when you look at the team’s lack of talent at the five. Here’s a look at how his minutes were allocated throughout each month of the season per Basketball Reference.

Minutes Per Game By Month:

For those who argued that Allen deserved minutes aren’t incorrect. How the rookie center was managed can’t be debated. Following the All-Star break, he was awesome and that’s in large part due to how the coaching staff kept him fresh for a late-season tilt.

After the All-Star break, Jarrett Allen was 3rd in the league for blocks per game (2.1), behind only Rudy Gobert and Anthony Freaking Davis.

Here's one of his 5 against the Bucks in April: pic.twitter.com/3v1AEZOLKU

Here’s a further breakdown of the number of times each of the team’s guys played 30 minutes or more last season, and their highest amount of time on the court.

Spencer was also one of the few players to play 40 minutes more than once. There would be times where Kenny Atkinson rode the hot hand, as he did with Rondae in Miami.

You’d like to see that a little more. Additionally, at times rather than making a quick substitution to talk to a player, let them see if they can figure it out on the floor themselves. That’d be part of the maturation process for young players in the league.

With an increased depth on the roster now Kenny Atkinson is going to find it even harder to distribute the minutes load. Allen, Russell, and LeVert will likely see the most obvious jumps out of the players above but with the addition of Shabazz Napier, Spencer Dinwiddie might be the odd man out. It’s a balancing act for Kenny Atkinson and his team. With 13 or 14 players who legitimately deserve to see court time, it’ll continue to be a work in progress for the developing head coach.