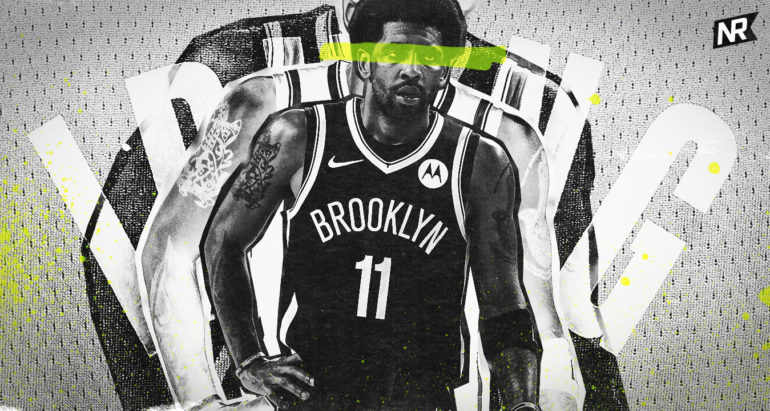 Brooklyn Nets: With No Kyrie, Where Does This Team Go?

Fresh off a heartbreaking playoff run that saw the Nets’ title hopes dashed by Kevin Durant’s “big ass foot”, Brooklyn enters the 2021-22 season with lofty expectations. Sean Marks has had a tremendous offseason bolstering the bench depth along with acquiring some key veterans. A promising rookie draft class spearheaded by Cam Thomas. An enhanced coaching staff with additions such as Kyle Korver. And of course, the Nets’ big three of KD, Kyrie Irving, and James Harden all back and fully healthy.

However, as Nets fans have come to experience over the years, if things seem too good to be true, then they are. An offseason that was supposed to be about gearing up for a potential title run has been hijacked by the concerns over Kyrie Irving’s vaccination status. New York implemented a mandate in September citing everyone ages 12 and up must have a COVID vaccination to enter certain “covered premises”. These include gyms, fitness centers, and arenas such as Barclay’s Center. It was for this reason Irving wasn’t at Nets media day which was held at Barclay’s Center last month. Irving told reporters via Zoom it was a personal matter and to respect his privacy. This left Nets fans in a sort of limbo as to whether he would get the vaccine or not. His absence from the team’s preseason home opener against the Bucks confirmed his vaccination status. Still, it left the door open to a possibility he’d be cleared by the start of the regular season.

The Nets were able to get Irving clearance to practice at the team’s facility HSS Training Center under the guise that it is a “private office building”. Irving’s appearance at the Nets’ annual Practice in the Park event lifted the spirits of some fans, even if it was just a bit.

However, that lifted feeling was dashed as Nets GM Sean Marks announced that Irving “will not play or practice with the team until he is eligible to be a full participant”. Marks also cited the fact it is a “personal choice” and that the team respects his individual right to choose.

So, with Kyrie’s playing status finally out of limbo it now begs the question: What now?

Well, initial reactions could be to go straight doom and gloom. No Kyrie, at least for the foreseeable future, means the Nets are no longer the imposing juggernaut team that strikes fear into all who dare cross their path. No longer is a trip to the NBA Finals (barring health) a sure thing. It also brings up the issue of being pro-vax and pro-Kyrie. But perhaps worse of all is maybe the fears of the Nets’ best shot at winning a title since the Jason Kidd-era being evaporated. And to be honest, fans have every right to feel that way. It’s completely understandable as to how a fan who suffered through the Yi Jianlian days, or the post-Celtics trade days would feel Irving’s absence makes all a wasted opportunity. Yes, Irving’s absence throws a monkey wrench into Brooklyn’s plans for world domination. But it doesn’t have to be the end of the world.

The Brooklyn Nets even without Kyrie Irving still possess one of the best rosters in the NBA. A championship-level roster that is being led by arguably the best player in the NBA and one of the greatest scorers in NBA history. Kevin Durant and James Harden still play for the Nets and will be there this season. Durant showed last season and throughout the playoffs that he is the same player if not better than he was before tearing his Achilles tendon back in 2019. He averaged 26/7/5 last season with shooting splits of 53.7/45.0/88.2. If not for missing over half the season due to injury Durant may have been in MVP talks. Fresh off a gold medal at the Olympics Durant enters this season primed for another dominant year. And if you don’t believe me, just check out what the GMs around the league said.

Speaking of MVP, the Nets have another guy on the roster by the name of James Harden. You know, the bearded guy who’s best buds with Lil Baby? Yeah him. The same guy that came to Brooklyn last season via trade and hit the ground running. Someone who was in the MVP race alongside guys like Joel Embiid and Nikola Jokic before injuring his hamstring which sidelined him for the last bit of the regular season.

With Irving being out for the foreseeable future is this not why it was so important for Sean Marks to upgrade the roster the way he did. Whether COVID or injury-related this team was built to withstand the absence of one of its stars. The addition of Patty Mills seems even more important at the guard position. A spark plug off the bench who can also be slotted into the starting lineup if need be. Jevon Carter, although not as offensively gifted as Irving or Mills, provides hardnosed defense and energy. And let’s not forget about the pride of joy of Nets fans right now which is Cam Thomas. Even though he isn’t a true point guard, Cam’s ability to create offense is similar to that of Irving’s along with his fearless attitude. Like Irving, there isn’t a defender Thomas doesn’t think he can’t score against.

I cannot stress enough how great of a player Kyrie Irving is. I mean the guy just came off a 50/40/90 season where he averaged 27 ppg!!! He’s an absolute wizard with the ball and gives you highlight plays on a nightly basis. That being said his absence, although sizable, won’t be as detrimental as if it were one of the other two. KD is KD and we saw how efficient the offense was with Harden running point.

Kyrie Irving via Instagram Live made it clear he has no intention of retiring from basketball. A rumor that had been circulating throughout the media spheres. He also explained how he wasn’t anti-vax however he remains unvaccinated to this point. If there is one positive that Nets fans can take away from this is that the door is still open for Irving’s return, whenever that may be. That being said, Irving’s potential season-long absence shouldn’t take away from the fact that this is still one of the greatest rosters in Nets’ history. They’re still primed to have an amazing regular season and make a deep postseason run.

With Irving, the Nets could be pegged as the clear-cut title favorites. Without him, they are still title contenders in the upper echelon of the league. Instead of focusing on what the Nets won’t have, focus on what they do have. Not many teams boast the firepower Brooklyn has both in their starting lineups and coming off the bench. Sure, the road may be a bit more difficult to traverse, but I can think of a lot worse things than having a team led by two future HOFers.

As Kendrick Lamar once said “We gon’ be alright”