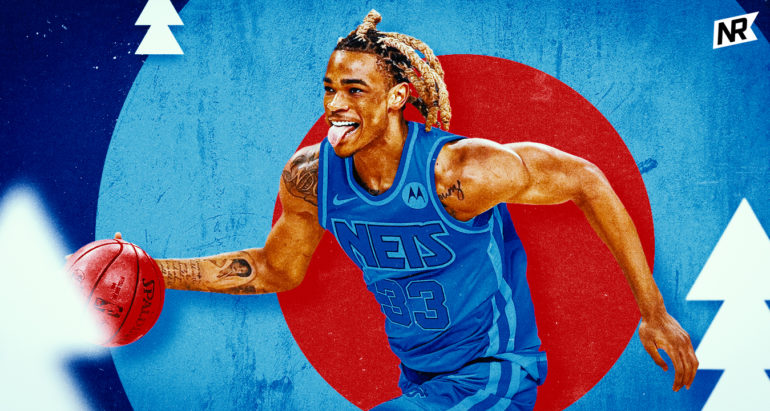 It’s incredibly rare for a contending team to have a roster littered with tantalizing young talent. The 2021-22 Brooklyn Nets are one of the few exceptions. Rookie Cam Thomas somehow fell into the Nets’ lap at pick 27 but with the crowded guard depth (even sans Kyrie Irving) it’ll be an uphill battle for the 20-year old to garner regular court time. Meanwhile in the frontcourt Nicolas Claxton has already proven his ability to elevate the game for Brooklyn in his short 47-game career.

This season’s Nets team is full of high-end talent and depth. Claxton is one of the only players on the roster with true untapped potential on both ends of the floor. To quote James Harden, the promise of the 22-year old center is ‘Scary Hours’.

In 724 minutes last season the Nets had a stunning 105.7 defensive rating when Claxton was on the floor. When he departed and was off the floor the defense plummeted to 115.3 points per 100 possessions. The impact of Clax City can’t be denied.

The defensive skill-set of Clax is so unique. A 6’11 frame combined with a 7’3 wingspan allows him to be an absolute monster defensively, whether that be when he’s on the perimeter or in the paint protecting the rim.

His former teammate was one of the many victims of Claxton’s defensive prowess when the big man was switched onto smaller players on the perimeter.

He does a wonderful job of keeping LeVert in front of him, forcing Caris into a tough mid-range jumper. Clax denies the attempt and uses his athleticism and speed to get out in transition for the dunk. If there was ever a play that illustrates Claxton in all of his glory, it’s this one.

It doesn’t matter where you are on the court, if you’re an offensive player you aren’t safe from Clax City.

Despite the fact he’s trailing Bobby Portis considerably he gains tremendous ground in a short amount of time to make the emphatic block. His defensive timing and instincts are on display here to the fullest extent.

Zach LaVine is one of the better rim finishers in the NBA. That doesn’t deter Claxton from making his presence felt down low. He recognizes that LaVine is the dangerous offensive player here and crowds his space as he tries to go around the rim for the layup. Clax is in the ideal position to make Zach uncomfortable and ultimately make the block.

Claxton oozes talent and potential on the defensive end. He genuinely has All-Defensive level capabilities. He’s absolutely warranted in his belief that he’s one of the best defenders in the league. Hopefully Coach Nash can give him the opportunities and on-court time to make a consistent impact for the team this season.

Where Nicolas Claxton Can Improve

On the other side of the floor the offense stayed elite with Claxton’s presence. Brooklyn had a 118.7 offensive rating when he was on the court. His top-level strengths may lie on the defensive side but he still has plenty of tools as well.

The Nets have a variety of centers on the roster but none possess the vertical threat that Clax does. When you have as diverse and skilled a passer as James Harden on the roster you have to surround him with players that can utilize those skills best.

The budding chemistry with Harden and Claxton was showcased last season. Clax makes the dribble handoff to Harden and then fights through contact as he finishes the play with an outrageous dunk. That 7’2 wingspan certainly helped on this occasion.

There are plenty of improvements Clax can make as an offensive presence. His willingness to screen and create openings for his teammates is a simple thing that will allow him to be more impactful. He doesn’t have to be Rudy Gobert in that department but it’s an easy thing that will not only make him better but make the game easier for the superstars.

The encouraging thing was that improvement was on display in the final preseason matchup with the Timberwolves. He’s quite good at not making contact and slipping screens but if he can combine that skill with increased screen frequency he’s sure to make an offensive leap.

Another simple thing the young center can improve upon is free throws. Claxton’s career free throw percentage is under 50% even though his form has no discernible problems. In another promising development, the addition of Kyle Korver to the coaching staff should hopefully reap benefits for Clax and the team.

An additional reason for optimism is the fact that during his time in Long Island in his rookie year Claxton’s efficiency was significantly greater. During that time he shot 77% from the free-throw line and an intriguing 56% from the perimeter.

With all the defensive strengths Clax possesses he’s by no means a finished product as a defender. He doesn’t possess the size of a traditional center which can at times leave him outmatched in the post. However, as he continues to get reps in the area and improve his strength and conditioning moments like this will become more regular.

There’s a variety of evidence that shows the lineups and combinations that utilize Claxton while on the court. The stats below are from the 2020-21 season via PBP Stats.&nbsp;

As illustrated above (and backed up by the eye test), combining him with The Beard is a must. Their chemistry will only grow with time together and Harden has goals to get The Young Alchemist paid in the offseason like he helped do for his former Rockets teammate Clint Capela.

Clax and Griffin were also a really efficient combination when they shared the court last season. Ultimately when you pair Claxton with the superstars and spacing good things happen for the Nets.

Will He Get Lost in the Shuffle?

The Nets have an enviable amount of players who can capably play at the five. All the different options allow for greater versatility for the Nets.

A priority for Nash and the coaching staff should be time for Claxton somewhere in that front-court shuffle. He showed positive signs playing alongside Millsap in the preseason game against Minnesota and can fit with pretty much anyone barring Bruce Brown because of spacing.

For the Nets to reach their lofty aspirations, regular court time for Claxton will need to play an integral role. He’ll have to fight for his time but with the talent and mentality he has, there’s no reason to doubt Clax City’s population will boom in 2021-22.