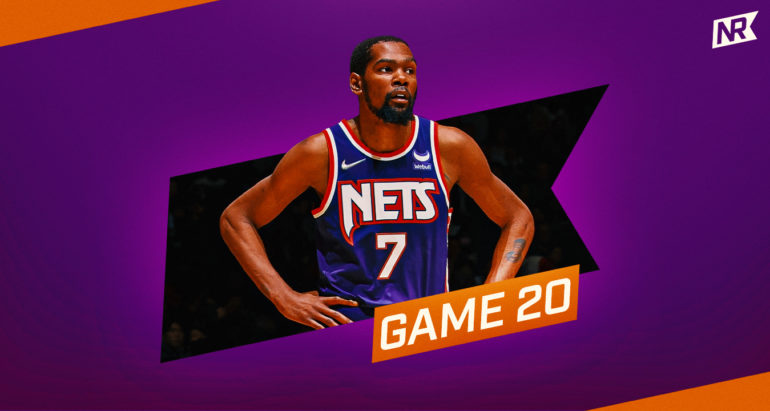 Well, it was another early-season measuring stick game for the Nets and unfortunately for Brooklyn, it was another loss. Phoenix started the game on a 21-8 run and never looked back. Devin Booker set the tone for the Suns with 16 first-quarter points. Chris Paul put on a clinic exposing LaMarcus Aldridge in the pick and roll and outdueling him in the mid-range war.

Despite 39 points from Kevin Durant and Brooklyn mounting a spirited 19-2 run in the fourth quarter, it proved to be too little too late.

DeAndre’ Bembry was one of the lone bright spots for Brooklyn in the loss. Even with Bruce Brown returning to the lineup Saturday night Bembry was still inserted into the starting lineup. From the jump Bembry was active. He scored the first two baskets for Brooklyn both coming off dunks. Throughout the game, Bembry just found himself amongst the action. He was the team’s second-leading scorer at halftime (10 points) and was one of the catalysts during the team’s run toward the end of the half. In fact, Bembry played a big role in both of Brooklyn’s runs during the game.

Where Bembry really shined was on the defensive side of the ball. After Devin Booker lit up the Nets for 16 first-quarter points, Bembry took up the assignment and made Booker work. Whether it was getting up in his chest or chasing him over screens, Bembry was a nuisance for Booker and even collected a few steals while guarding him in the fourth.

In the absence of Bruce Brown Bembry has served as the energy guy for the Nets. Although he doesn’t impact the offense in the same way Brown does (short roll, dunkers spot etc) he provides a level of athleticism and sort of chaotic energy that’s unmatched among anyone else on the team. As the season has gone on DeAndre’ has seen his role grow and grow. Even with Joe Harris returning soon and Bruce already back, Bembry has proven to be a vital role for this team.

Will the real Harden please stand up

Well, the Jekyll and Hyde season of James Harden continues as unfortunately for Brooklyn, the Hyde part was on full display against the Suns. The game didn’t go nearly as well as the one against Phoenix last season in which Harden led a huge second-half comeback to capture a win. From the opening tip to the final buzzer Harden struggled in almost every aspect. The big problem for him was turnovers. Of Brooklyn’s 20 team turnovers, Harden was responsible for seven of them. Now the Nets have won games where Harden racks up large turnover numbers however they’ve generally come against lesser opponents. Against contenders such as the Suns, the Nets can’t afford for Harden to be as careless with the ball.

The turnovers could have been overlooked if not for it also being paired with a horrendous shooting night as well. James scored 12 points on 4 of 15 shooting and only got to the line four times. Even though Harden would finish with a triple-double, it was one of his more lackluster performances of the season. Despite his 14 assists Harden seemed to force things when it wasn’t needed.

During his postgame presser, Harden mentioned still figuring out his role as scorer/facilitator with Kyrie out. It was evident Saturday by Harden’s apprehensiveness to either score or facilitate.

With the loss to Phoenix, the Nets have now lost all six of their games this season to teams over .500. After their loss to the Warriors, the prevailing thought was the Nets weren’t on the same level as some other contenders in the league. Saturday the Nets had a chance to change that narrative but ultimately fell short.

In all their losses this season there seems to be a similar trend. The Nets aren’t able to put together a complete game from start to finish such as in their last win against the Celtics. Yes, injuries and missing personnel make it hard to really get a gauge on this Nets team. However, if Kyrie Irving doesn’t return the Nets need to know they can still compete with the other upper echelon teams. Getting a better effort from James Harden would go a long way as well. With Kevin Durant already playing at an MVP level, the team needs their other superstar to play like a superstar.

There also needs to be a better effort from the coaching staff as well. Coaching can also play a big role in closing the gap in terms of personnel differential. Certain things such as maybe taking LaMarcus Aldridge out when he sees the Suns attacking him in pick and roll or calling a timeout to quell an opponent’s momentum.