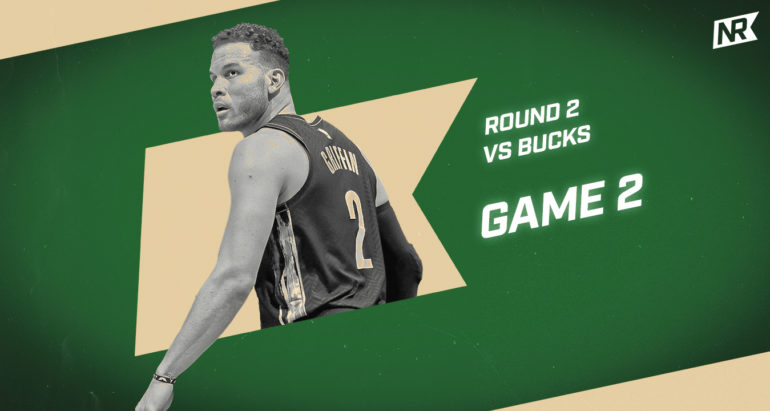 The Brooklyn Nets made it clear from the opening tip of Game 2 of their second-round series that the plan was to overwhelm the Milwaukee Bucks with a barrage of points, and the team did just that on its way to a 125-86 victory to claim an early 2-0 series lead. Here are a few takeaways from the game.

The Others Chime In

To begin the second quarter, Nets head coach Steve Nash kept Kyrie Irving and Kevin Durant on the bench and instead went with a lineup of Blake Griffin, Bruce Brown, Joe Harris, Landry Shamet, and Mike James. This was a noticeable shift from the approach Nash used in game one in which he kept Irving on the court to begin the second frame.

With his squad spotting him a 17-point lead after the first intermission – Milwaukee led 32-30 in game one – Nash jumped at the opportunity to rest his dynamic duo. Without James Harden in game one, Irving and Durant played a combined 84 minutes, a dramatic increase from the 73 minutes the pair averaged against the Boston Celtics.

Despite the comfort of an early and sizable lead in game two, it was impressive to see the auxiliary options keep the offense humming. From the opening inbound of the second quarter to the moment Irving and Durant checked back in at the 8:51 mark, here are how the Nets got their buckets:

While not everyone was able to get one to go down, each player was actively involved in the positive possessions during this stretch. With the Bucks’ depth and the Nets’ lack thereof having been a talking point leading into the series, it’s no surprise that Brooklyn finds itself in a commanding lead after an impressive performance from the bench.

Milwaukee Doesn’t Punch The Nets Back

At full strength, Brooklyn has one of the most intimidating collections of scorers ever assembled on an NBA court. And even without Harden, the Nets still have enough firepower to blitz defenses into submission. Consequently, it’s not difficult to give Milwaukee a pass for falling behind in the series two games to none even though this may be the most talented group Bucks General Manager Jon Horst has put together.

However, this Bucks team – and particularly coach Mike Budenholzer – does have a history of not being able to throw a counter punch. Whether it’s an inability to make adjustments in a timely manner, or at the very least, make any adjustments at all, the Bucks have been haunted by a disturbing trend that has seen them buckle at the first sign of turmoil.

Since Budenholzer got behind the wheel in 2018-2019, here are the Bucks’ playoff results:

While Milwaukee has a respectable 19-12 postseason record with Budenholzer at the helm, the team has been unable to find success in an extended series. The moment adversity confronts the Bucks, they have not been able to recover. The team dropped three consecutive games to the Heat in the bubble, and were reversed swept by the Raptors two years ago.

Combining these two past series losses with the single games dropped against the Celtics and Magic, the Bucks have now been outscored in the opening quarter on 7 of 13 occasions. Additionally, Milwaukee was outscored in the second quarter three times after winning the first period during these games. Whether it’s falling behind early or an inability to sustain momentum into the second quarter, we’ve already seen both scenarios play out early in the series against the Nets.&nbsp;

Milwaukee finished the regular season as one of the elite three-point shooting teams, averaging 37.1 attempts on 38.9 percent, good for fifth in the league. The team’s shooting prowess has not carried over into the postseason, immediately apparent in the first round during which the Bucks averaged just over 40 attempts on 32.7 percent.

Against Brooklyn, these numbers have plummeted to 24.5 percent on 28.5 attempts. Credit to the Nets for playing sound perimeter defense which has led to primary Bucks weapons like Khris Middleton shooting 3-of-13 from deep.

If the Bucks can’t find their offense at home for games three and four, they won’t be able to keep up with the flamethrower offense the Nets have at their disposal.