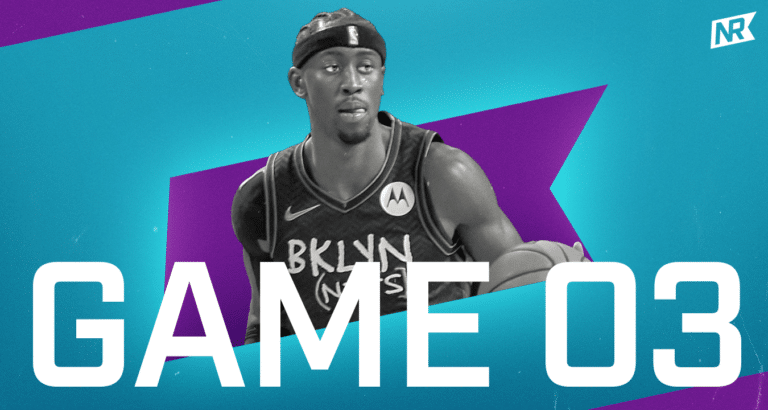 Three Takeaways from the Brooklyn Nets’ Loss to the Charlotte Hornets

In an ugly performance on Sunday night, the Brooklyn Nets lost for the first time this season.

The Brooklyn Nets struggled to get into any type of rhythm on Sunday night. Unfortunately, there was a great deal of sluggish play on the offensive side of the ball. While they held a one-point lead at half, the floodgates opened in the second. The Hornets started hitting shots from the perimeter — continually pummelling the Nets in the paint. Following such a disappointing performance, I’ve got three takeaways.

Through three games, Kevin Durant and Kyrie Irving have been carrying this team. Specifically against Charlotte, they combined for 54 points on 19-32 (59.4 percent) shooting. The rest of the Nets scored just 50 on 16-50 (32 percent) shooting from the floor. The two of them provided the only real offensive spark for Brooklyn as the Nets’ shooters largely struggled to hit from deep.

Durant was dazzling from the jump as he got into an early rhythm off dribble pull-ups. Irving took over late in the second quarter. But both of them were at their best down the stretch. After entering the game together at the 8:30 mark, they proceeded to pull Brooklyn within two points. But, in the end, their late push wasn’t enough as Durant missed a short pull-up jumper in the final seconds that would’ve tied the game.

Being able to rely on two stars like that is an incredible privilege. But, it’s also concerning that that the Nets lost to an inexperienced and struggling Charlotte team despite the fact that those two had such impressive performances. Part of that is due to losing Spencer Dinwiddie just minutes into the second half with a right knee strain. But it’s clear that Irving and Durant need more help than what they got tonight.

Likely the most damning evidence of the poor performance from Brooklyn’s supporting cast was the play off the bench. The Nets’ second group finished the night 9-32 (28.1 percent) from the floor and 5-23 (21.7 [percent) from deep and that’s including the superb late play from Timothe Luwawu-Cabarrot as the 6-foot-7 wing went for eleven points on 4-4 shooting in just twelve minutes. In fact, he hit a clutch corner-three with just forty seconds left to give Brooklyn a chance to tie things up on the next possession.

Landry Shamet was especially bad against Charlotte, failing to register a point as he missed all of his nine shot attempts and all eight of his long-bombs. The 2018 first-round pick has struggled early this season as he’s averaging a mere 3.7 points per game on 12.5 percent shooting from the field.

The Brooklyn Nets will hope that Shamet can turn things around as the season progresses as they’re going to rely on him to provide a scoring punch alongside Caris Levert. Taurean Prince also had a poor outing, finishing with two points as he missed all five of his field-goal attempts — all of which came from deep.

For this team to be at its best, the Nets need improved play from these guys. Counting on Caris LeVert to be the go-to guy for the second unit will only get them so far.

The Charlotte Hornets dominate in the paint and in transition

In a contest where the Nets endured stretches where they seemingly couldn’t hit the broadside of a barn, the Hornets crushed Brooklyn in the paint, scoring a whopping sixty-two points compared to the Nets’ twenty-six. Charlotte also wracked up nineteen points in transition which was largely a result of Brooklyn’s nineteen turnovers.

Brooklyn is lacking any real inside scoring punch, which is fine when they actually make shots from the perimeter. Couple that with Charlotte’s ability to consistently penetrate the Nets’ defense and Brooklyn’s general sloppiness and that’s a recipe for disaster. The intangibles of taking care of the ball, getting back on defense, and protecting the paint were all lacking for Brooklyn tonight and the Hornets took advantage.

This was a disappointing loss for such a talented team. Nonetheless, this is just the third game of the season, and, despite the fact that almost everything that could’ve gone wrong did, Brooklyn still only lost this game by two and had a chance to tie it up late. They’ll look to regroup and recover for their first back-to-back of the season tomorrow night against the Memphis Grizzlies.