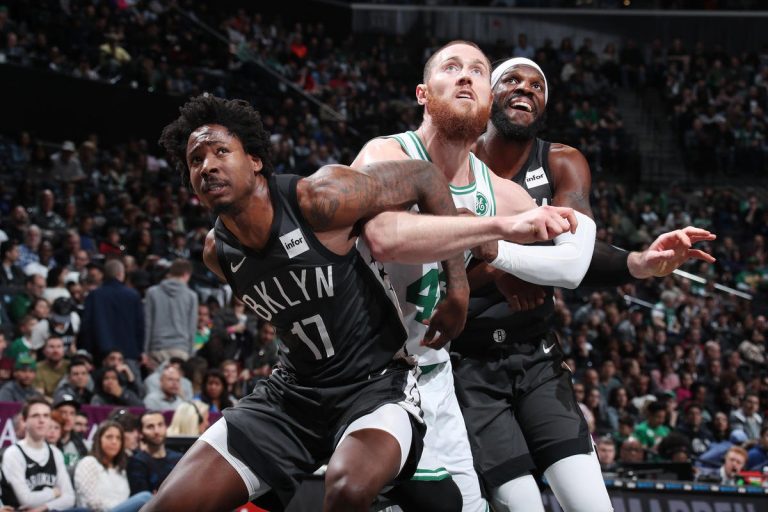 BROOKLYN, NY - MARCH 30: Ed Davis #17 of the Brooklyn Nets Aron Baynes #46 of the Boston Celtics and DeMarre Carroll #9 of the Brooklyn Nets box out during the game on March 30, 2019 at Barclays Center in Brooklyn, New York. NOTE TO USER: User expressly acknowledges and agrees that, by downloading and or using this Photograph, user is consenting to the terms and conditions of the Getty Images License Agreement. Mandatory Copyright Notice: Copyright 2019 NBAE (Photo by Nathaniel S. Butler/NBAE via Getty Images)
Home
Brooklyn Nets
Gotham's Reckoning

The Stretch Run Part 3: We Have to Talk About Defense

We are down to three games left in the season with the NBA playoffs around the corner. We are also down to the third and final piece in my series The Stretch Run, where I review the drivers of the successes and failures that have defined the season. In Part 1: Lineup Review I discussed the primary five-man lineup combinations used this season. In Part 2: Offensive Strengths and Weaknesses I discussed the drivers of offensive performance. With the Nets currently sitting one game ahead of the ninth-place Heat, let’s dive in on their defensive performance this season as well as what to watch for during the final playoff push. All statistics are from Cleaning the Glass unless otherwise noted and exclude garbage time and possessions at the end of quarters likely to end up in a heave.

The Nets rank in the middle of the league defensively at 16th in points against, despite ranking 6th with a 51.5% effective field goal percentage (eFG%) allowed. However, the team ranks in the bottom third of the league in both turnovers forced and offensive rebound rate allowed. These factors have dragged their overall performance lower, despite their strong shot defense.

On the other side of the equation, the Nets defense is 5.5 points per 100 worse with Jarrett Allen on the floor (worst on the team and 8th percentile among bigs). Additionally, Spencer Dinwiddie and Joe Harris each have significant negative differentials. Allen has become the scapegoat for Nets fans during recent struggles, getting pushed around in the post and on the boards. In Part 1 of this series, I suggested shifting some of his minutes to Davis for the playoff push. However, it should be remembered that Allen is only 20 years old and is ahead of his development schedule, as he was expected to be a project out of the draft. Even though he has performed relatively inconsistently (and poorly at times), he has been a highlight machine and has gained notoriety league-wide.

For additional context, this season Allen has a Value Over Replacement Player (VORP) of 2.3 and a block rate of 4.5%. Per Basketball-Reference, the list of big men to accomplish a VORP of 2 and a block rate of 4% at 20 years of age or younger is nine players long (and includes Kevin Garnett and Anthony Davis twice). Knicks rookie Mitchell Robinson and his historic block rate this season make the list as well. As shown to the right (sorted by Win Shares), the list is impressive and the only name Nets fans may not be enthused about is Andris Biedrins. Although he has been easy to pick on recently, lets not turn on The ‘Fro just yet.

The table above shows opposition shooting frequency and percentage by shot type in the last three years under Kenny Atkinson. As discussed in Part 2, the Nets have focused their offense around minimizing inefficient mid-range shots.  Likewise, on defense, they focus on the same methodology aiming to take away efficient shots from 3 and at the rim while giving opponents the mid-range.

In 2015-2016, the last season under coach Lionel Hollins and interim coach Tony Brown, it was the antithesis of the current strategy.  The Nets allowed the third lowest frequency of mid-range shots while ranking near the top of the league in frequency of rim and 3-point shots allowed. The Nets ranked last in the league in eFG% allowed that season by a significant margin. With Atkinson in charge, they have improved each season in eFG% allowed, as the defensive blueprint was reversed. As a result, they immediately jumped to 17th in the league in 2016-2017, to 11th in 2017-2018, and finally to 6th this season (as mentioned above). Their defensive efficiency in terms of points per possession has improved each year under Atkinson as well, jumping from 29th in the league in 2015-2016 to 16th this season.

The Nets rank in the top half of the league halfcourt defense, ranking 12th with 93.8 points per 100 plays (halfcourt defense reflects plays run with all 10 players on side of the court and set in normal guarding position). As an example of what was mentioned in the defense overview earlier, Ed Davis has significantly improved the team’s halfcourt defensive performance when on the floor. Joe Harris has the worst halfcourt on/off numbers on the team, as the Nets are 6.3 points per 100 plays worse with Harris on the floor.

Transition defense is defined as any play where teams are switching sides of the court and all five defenders are not able to get set. The Nets rank 5th in the league in transition defense, Per Synergy play type data, the Nets are second in eFG% allowed in transition (behind only the Milwaukee Bucks).

Although the Nets allow a significant amount of transition opportunities compared to the rest of the league, they have been able to minimize the damage done. Overall, holding back their defense (and transition offense) is their lack of ability to force turnovers. The continued development of Rodions Kurucs and a return to full health of Caris LeVert should help the team force more steals, as both are long-armed highly active defenders. Based on improvements shown in the last three seasons of the Sean Marks/Kenny Atkinson regime, things continue to look up as players develop within the system.