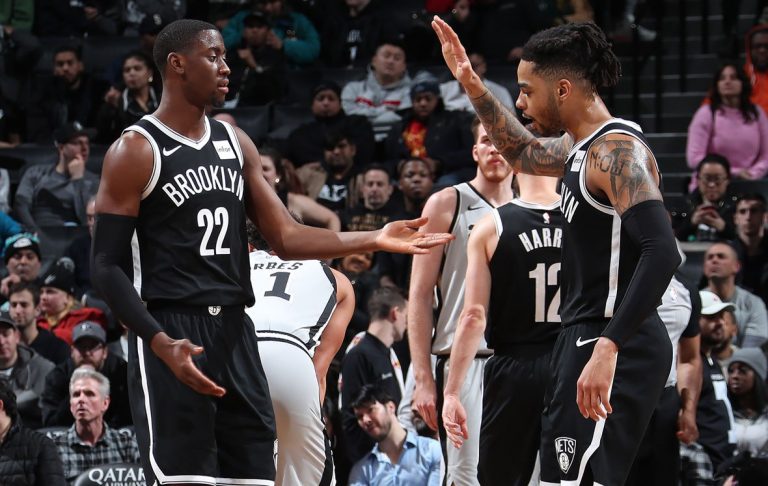 With only seven games remaining in the regular season for the Brooklyn Nets, this is the second piece in my series The Stretch Run, where I review the drivers of the successes and failures that have defined the season. In Part 1: Lineup Review, I discussed the primary five-man lineup combinations used this season. With the Nets currently sitting 1.5 games ahead of the ninth place Heat, lets dive in on what has driven their offense this season as well as what to watch for during the playoff push. All statistics are from Cleaning the Glass unless otherwise noted, and exclude garbage time and possessions at the end of quarters likely to end up in a heave.

Step in the Arena – Offense Overview

The Nets rank in the middle of the pack offensively at 18th in scoring with a 52.4 team effective field goal percentage (eFG%). Joe Harris has been the team’s most efficient scorer, with an eFG% of 62.1% largely due to his leading the NBA in 3-point accuracy. Harris has been the model of consistency for the Nets as he has grown into a larger role. Harris averaged 1.28 points per shot attempt (PSA) last year and is currently at 1.29 PSA this season.

The biggest driver of the Nets offense, their point guards, have also made a marked improvement this season.  D’Angelo Russell, blossoming into an All-Star as a 22-year old, improved his PSA from 1.03 to 1.07 while turning the ball over less and showcasing his passing ability.  Additionally, Russell improved his 3-point percentage from 33% last season to 37% this season.  Spencer Dinwiddie has made an even larger jump in scoring efficiency, from 1.06 PSA to 1.19 PSA (91st percentile in the league among combo guards).

The table above shows shooting frequency and percentage by shot type in the last three years under Kenny Atkinson.  The team has ranked in the bottom fifth of the league in mid-range attempts and in the top five in 3-point attempts in each year.  Atkinson was a welcome change from Lionel Hollins, an old-school coach who was slow to adapt to modernization of the game. In both seasons under Hollins, who lasted 37 games into the 2015 – 2016 season before being replaced, the Nets ranked in the top eight in mid-range shots.

With the system put in place by Atkinson, which focuses on the value of the 3, the Nets jumped from 26th in the league in 3-point attempt frequency to 5th (despite ranking 26th in 3-point percentage). Although they did not shoot the ball well in the first year under Atkinson, they improved their scoring differential from -8.5/100 possessions in the 2015 – 2016 season to -7.5.  As players have developed in the current system and more suited personnel has been acquired, the Nets overall improvement has tracked their improved accuracy from distance (as shown in the chart to the right.

The Nets adapted quicker than most of the NBA. In the 2016 – 2017 season only three teams had 36% or more of their shots come from 3.  In 2018 – 2019, there are currently nine teams at that mark. Being proactive, not reactive, has allowed them to have a competitive advantage as more teams in the league have shifted their style of play.

Hard to Earn – Scoring in the Halfcourt

The Nets have been in the middle of the pack in terms of halfcourt offense, ranking 15th with 94.8 points per 100 plays (halfcourt offense reflects plays run with all 10 players on on side of the court and set in normal guarding position). Interestingly, with Jared Dudley on the floor the team is 6.8 points better offensively in the halfcourt (92nd percentile among forwards). The Nets offensive rebound percentage (OREB%) ranks 14th in the league, and is 3.5% higher with DeMarre Carroll on the floor and 3.1% higher with Ed Davis. For the sake of context, the NBA team with the highest OREB% in the halfcourt is the Denver Nuggest at 31.4%. The Nets rank 22nd in the league with 80.7% of their plays in the halfcourt, the Sacramento Kings rank 1st with only 74.9% of plays in the halfcourt. Halfcourt is generally the much less efficient form of offense compared to transition offense, which will be discussed in the next section.

Although the Nets rank near the middle of the pack offensively, they have struggled to gain easy points in transition. Per NBA.com, they rank 27th in the league in steals per game, and have not scored well enough in the halfcourt to make up for the lack of transition scoring. The Nets offense is focused on efficient shots, and as they continue to foster growth of their own players and acquire players who fit their system their offensive efficiency should grow. An attempt to push the ball more and gain transition opportunities should help foster increased offensive efficiency as well.