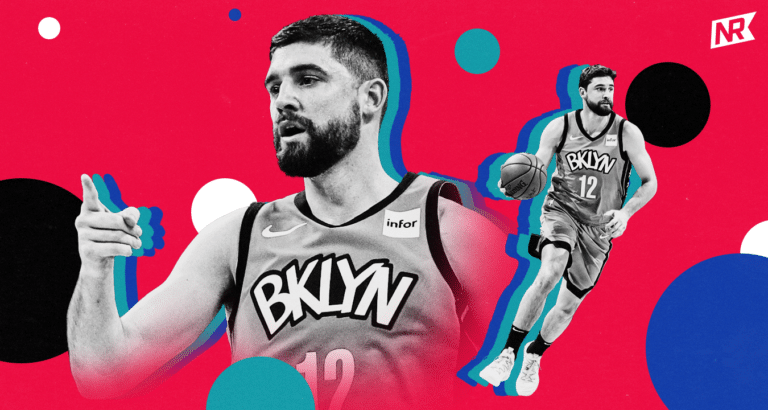 Should Joe Harris Come Off the Bench for the Brooklyn Nets?

Joe Harris is a phenomenal complementary player for the star-studded Brooklyn Nets. However, would he be better suited coming off the bench?

When the Brooklyn Nets brought Joe Harris back this offseason on a four-year, $75 million deal, it was with one goal in mind: to give stars Kyrie Irving and Kevin Durant a star-caliber complementary player to provide floor spacing and an additional scoring punch. His ability as a catch-and-shoot flamethrower from deep alone makes him worth his weight in gold.

And, yet, while his inherent magnetism as a shooter is what makes the Brooklyn Nets’ and Joe Tsai’s decision to reach into the luxury tax to pay Harris a sound one, Harris’ skills off the dribble and as a playmaker are what makes the deal a slam dunk for a title-contending team. That, in and of itself, isn’t news.

Harris was always going to be a critical component of this squad alongside more traditionally ball-dominant players like Durant, Irving, Spencer Dinwiddie, and Caris LeVert. It’s why his place in the starting lineup has always been secure. It’s also partially why the conversation has always been whether Dinwiddie or LeVert would act better as the sixth man for this team.

Playing Harris alongside three of those four guys is ridiculously dangerous as teams will be hesitant helping off the twelfth-best three-point shooter, percentage-wise, of all time. However, while the prospect of Harris being the catch-and-shoot king he is with loads of space is tantalizing, all the time and dedication Brooklyn spent making him more than just a catch-and-shoot guy could go to waste when it matters most.

Should they bring him off the bench?

The solution? Bring Joe Harris off the bench alongside the Brooklyn Nets’ very own Manu Ginobli in Caris Levert.

In doing so, the Nets can allow Harris to have a similar impact on the game that he did late last season as he took on the role as the second option. Specifically, paired with Levert last season as a member of the ‘Bubble Nets’, Harris averaged 19.1 points per contest on 59.8 percent shooting from the floor along with a 55.1 percent shooting clip from behind the arc in eight games.

Obviously, that’s a fairly small sample size aided by increased opportunity on a team ravaged by injury and opt-outs. Yet, when called upon to play a bigger role, Harris delivered as he and LeVert essentially carried that team to a 5-3 record in the eight games Harris played in. This suggests that, when playing against the inferior competition that is the opposing squad’s bench units, LeVert and Harris would clean up. They’re both meant to be so much more than catch-and-shoot guys, and using them off the bench together would ensure their talents aren’t wasted.

Joe Harris scored 14 points in his first regular-season game in the NBA's bubble. Here are all 14 of his points from yesterday's loss to the Magic. pic.twitter.com/KSoj3qRWWN

Who would be his replacement?

But, perhaps most critically, there is already a ready-made replacement for Joe Harris’ slot in the Brooklyn Nets’ starting lineup: Landry Shamet. The Nets’ acquisition as a result of trading their 2020 first-round pick in a three-team trade with the Detroit Pistons and LA Clippers, Shamet is the prime candidate to take Harris’ spot. He’s an efficient shooter off the catch and has already impressed in his short time with Brooklyn.

Shamet scored thirteen points on three-of-seven shooting from the floor and three-of-five from behind the arc against the Washington Wizards in the Nets’ first preseason contest. He followed that up with a mere six points against Boston on Friday night and another six in last night’s season opener. However, it’s clear that Shamet is firmly a part of this team’s rotation and will be an effective floor-stretcher. He’s no Joe Harris, but when he’s playing alongside Durant and Irving and Brooklyn has Harris and LeVert coming off the bench — he does not need to be.

Landry Shamet after being traded to the Brooklyn Nets.

Obviously, just because he’ll be starting the game on the bench in this scenario, Harris would still be on the floor when it matters most. Ideally, he’d enter the game roughly six and a half minutes into play with the bench unit for about 10 minutes, sit for a few, then come back and play with the starters for the final stretch. Coming off the bench would by no means be a slight to Joe Harris’ capability and value on the floor. Rather, it’d be a smart move for both sides, considering it would allow him the opportunity to utilize his skillset that is so far past being solely a floor spacer on the offensive end.

After all, isn’t that why the Brooklyn Nets are paying him an average of $18.5 million for the next four years?

To be more than the dead-eye shooter he’s known to be?