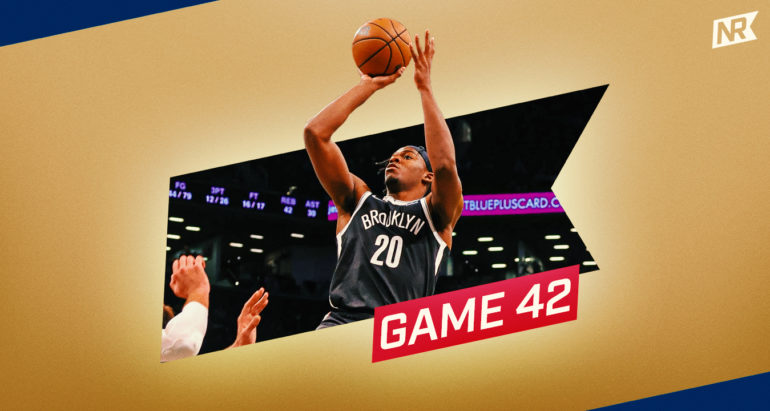 After a game on Thursday that will be wiped from the memory banks, the Brooklyn Nets entered action Saturday night with one last tune-up before embarking on their 4-game road trip. From the opening tip, the Nets looked much better than they did in their previous game. It probably had something to do with the fact that the Nets had Kevin Durant and Patty Mills back in the lineup.

Brooklyn would start the game off fast and did what they needed to do against an inferior opponent, which was taking care of business early. The Nets used a 10–0 first-quarter run to springboard them for the rest of the game. Even with Durant exiting the game in the second quarter with a left knee sprain, the Nets offense was on cruise control, amassing as large as a 30-point lead.

The news of Durant being out for the remainder of the game seemed to take the wind out of the sails a bit for the Nets. They seemed flat and lifeless, which was a big reason why New Orleans started the second half on a 14–2 run. A few baskets from Harden and Patty Mills helped steady the ship a bit but the Pels kept chipping away, trimming the lead to as low as 14.

The massive lead the Nets had, however, just proved to be too much for the Pelicans to overcome as James Harden, Patty Mills, and Cam Thomas continued to hit shots that took the air out of any potential comeback. It would not be a repeat of the matchup earlier in the season, which saw the Pelicans come back from a big deficit. When the dust settled the Nets were on the winning side of a 120–105 final score.

If you’ve watched Nets games this season, you’re familiar with the struggles this team faces when starting a game. First quarters have been a rollercoaster on both the offensive and defensive sides of the ball. However, that wasn’t the case in this one as Brooklyn played one of its more complete first quarters of the season.

Starting on the defensive side the Nets looked locked in. Their rotations were crisp as it seemed they were flying to the ball whenever it was swung around the perimeter. Day’Ron Sharpe especially had some good defensive possessions on Jonas Valencunias and even forced DeVonte Graham into a turnover on the perimeter. As a team, the Nets tallied three blocks and forced five New Orleans turnovers.

Offensively, the Nets were clicking and it was spearheaded by their two stars. Durant and Harden were the catalysts behind what looked like a truly cohesive unit. Kevin set the tone early making the first basket of the game and would finish the quarter with 12 points. He almost had 15 but his buzzer-beater was overturned. Harden showed an excellent burst from the opening tip and his aggressiveness opened the floor for his teammates to thrive. Cam Thomas also added to the offensive assault connecting on all three of his shots for seven points. Brooklyn would go on a 10–0 run and get out to a double-digit lead midway through the quarter. In fact, it was just the fifth time all season the Nets held a double-digit lead at the end of the opening frame.

The kids have come to play!!! Over the past few games, Steve Nash has leaned on his rookies and they have answered the call.

Let’s start with Kessler Edwards. In his third straight start, Kess was tasked with guarding one of the elite scorers in the league in Brandon Ingram. Although Ingram caught him on a sweet pump fake and spin, Kess did an overall solid job in his coverage. The most impressive feat for Edwards in this game was his perimeter shooting. The hope is that Edwards turns into the 3-and-D player the Nets have been missing for years. Saturday night he took a step in the right direction knocking down four of his five three-point attempts. He also flashed his abilities in the mid-range, hitting on a 15-foot jumper off the pass from Harden.

Next, let’s take a look at Day’Ron Sharpe. The rookie out of UNC has been a breath of fresh air to a Nets frontcourt that is searching for some semblance of stability. Like Kessler, Sharpe was also starting his third straight game and his impact was felt immediately. As mentioned, Sharpe provided Brooklyn with good energy in that first quarter and it resonated throughout the game. What really stood out was his growing connection with James Harden, particularly in the pick and roll. A few times in this one Harden found Sharpe for an easy bucket after a hard screen and roll or a slip. They also connected on a sick alley-oop. On defense, Sharpe rose to the occasion against a sizable opponent. He gave Valencunias fits all night and really made him work for his buckets. Day’Ron was also a presence in the paint. A career-high 10 rebounds, six of them on the offensive glass, should tell you all you need to know about his work on the boards.

With no exact timetable on Nic Claxton’s return and LaMarcus Aldridge still on the mend, Sharpe is proving to be a reliable option as a starter for Brooklyn.

And last but certainly not least, Cam Thomas. At this point calling Cam a bucket is just too obvious of a statement. We are truly watching the birth of what could be a really special scoring talent. Cam’s ability to probe the defense and seemingly make something out of nothing is unique for a player so young. Cam would put up his second straight 20+ scoring effort and again do it at pretty solid efficiency. His 20 points came on 9-for-13 shooting including knocking down a pair of triples. The outside shooting is something we’re seeing start to improve over the past few games as well.

Overall, the rookies had their most impressive showing since they were called upon to provide relief when the team was decimated with COVID. Excluding David Duke Jr. who only played two minutes, the rookie trio combined for 48 points and 24 rebounds. The beauty of this trio is that they each provide something different and fill a need for this team. Each guy in their own right is making a strong case to be included in the rotation once the team is fully healthy.