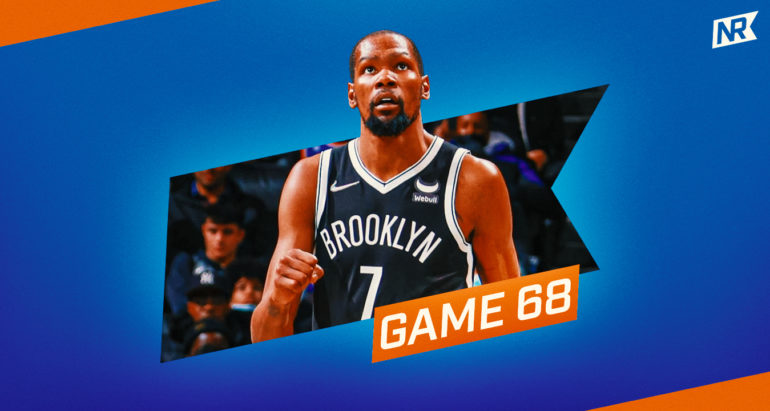 For the first time since early December, the Nets had an opportunity to win three games in a row–and they capitalized on it.

The new year has not treated the squad well–injuries, unsatisfied players and poor chemistry caused Brooklyn to fall under .500. However, the Nets have seen some recent improvements since Kevin Durant’s return from injury. His presence has led Brooklyn through thick and thin, and that was clearly evident on Sunday.

One of the leading stories throughout this NBA season has revolved around Kyrie Irving and his inability to play in home games. Sunday’s game against the Knicks, however, felt different. Irving was allowed to sit courtside in the Barclays Center, but still could not play, even with the adjusted mandate.

On top of that, Seth Curry was ruled out prior to the game due to ankle soreness. He has played a major role since the trade with Philadelphia went down, and his pure shooting was missed on Sunday. Luckily for the Nets, they had Kevin Durant, and that was enough to beat the Knicks at home.

Brooklyn looked sharp on both sides of the floor as Durant and Bruce Brown led the team to a quick 11-0 lead. Durant seamlessly found his spots on the court, scoring 16 points in the first quarter alone. Despite the excellent offensive performances, New York found a rhythm on its end and went into the second period trailing by just five points.

The Knicks’ momentum carried over into the next quarter, ultimately taking a 42-39 lead. Brooklyn’s lack of depth on the bench allowed New York to take control as the Nets struggled to hit their open looks. Goran Dragic was uncharacteristically off, missing his shots while turning the ball over multiple times. While Durant performed well, it seemed like he was carrying a heavier load due to all the missing pieces. New York took advantage of this and maintained a solid lead throughout the majority of the second quarter.

Andre Drummond turned on a switch during the final few minutes of the half, rebounding and finishing at the rim with a passion. Fueled by his energy and strength, the Nets regained the lead and went into halftime leading 62-60.

The third quarter was a back-and-forth battle. Durant continued to pour it on, while Julius Randle and the Knicks responded effectively at the other end. Evan Fournier was a thorn in Brooklyn’s side, shooting 9-of-13 from the field while scoring 25 points. Brown and Durant pushed the Nets’ lead up to nine, but a quick run from New York made it an 88-83 ball game heading into the final twelve minutes.

During the past few matchups with the Knicks, things have been intense until the end. Sunday was no different, as Brooklyn failed to put the game away when given the opportunity. Regardless of Durant scoring upwards of 50 points, New York came right back time and time again. A bucket from RJ Barrett gave the Knicks a 103-101 lead with under three minutes to play, and Brooklyn seemed to be out of steam.

But Durant wasn’t having any of it and buried a deep three-pointer before draining four clutch free throws. The Nets hung on for the 110-107 victory, winning three games in a row for the first time since Dec. 16.

Without Kevin Wayne Durant, who knows where the Nets would be right now. Yes, the team has plenty of work to do–but with Durant, anything is possible. In typical Slim Reaper fashion, the superstar let no one get in his way, finishing with 53 points, nine assists and six rebounds. Considering Brooklyn was without Ben Simmons, Irving and Curry, the team needed each of those buckets.

After his outstanding performance, Durant had some choice words for NYC Mayor Eric Adams. There is no doubt about it: the Nets need Kyrie Irving back on the court at all times, but he is currently only eligible to play four more games in the regular season. Irving’s recent presence on the sideline has put national attention on the issue and pressure on Adams’s mandates. Durant has never lost faith throughout this battle, standing by Irving’s side consistently.

Moving forward, Brooklyn still has plenty of improvements to make. Obviously, the team cannot rely on Durant to score 50 points each night (even though he is likely capable). The role players must make an impact; otherwise, the Nets may have difficulties making it out of the play-in tournament. Outside of Brown and Drummond, the rest of the squad struggled throughout large portions of the afternoon. Patty Mills, for example, finished with just five points on 2-of-11 shooting from the field (but also made a big bucket down the stretch).

The simple solution to this issue resides in the team regaining their main starters. Simmons, Irving and Curry all provide elements that are crucial to have on the court. LaMarcus Aldridge is essential off the bench, but has been missing in action due to his hip injury. As the pieces come back together, Brooklyn should continue to make strides towards the postseason–but time is running out. With their next matchup coming in Orlando on Tuesday, the Nets find themselves with a key opportunity to win four in a row.