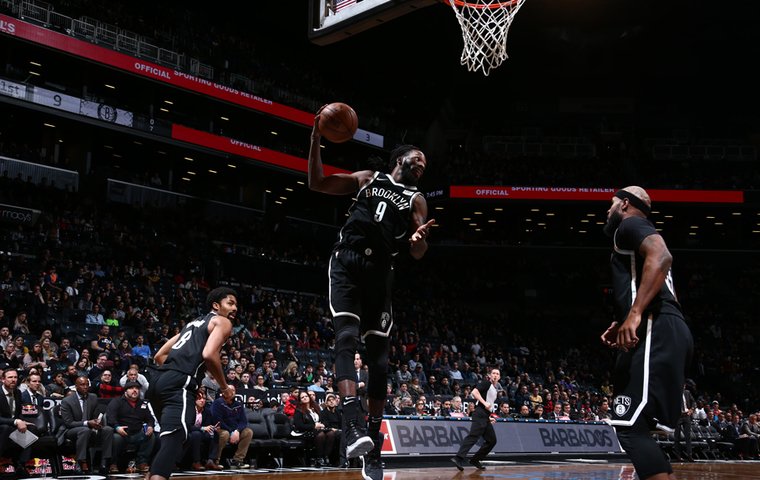 The Brooklyn Nets faced off against the Utah Jazz for the second time this season. In the two teams’ prior meeting on November 11, the Jazz came out on top, 114-106. This time around, things turned out differently for the Nets, even though they were missing D’Angelo Russell for the second consecutive game.

From the get-go, the Nets’ offense was immensely high-powered. Brooklyn scored 39 points in the first quarter on a mega 65.2 percent shooting from the field and 53.8 percent shooting from behind the arc. This was accompanied by just one turnover in the first 12 minutes of the game, a huge upgrade for a team that averages 15.7 a night. Trevor Booker and DeMarre Carroll were the main factors in the couple of minutes or so out of the opening top, contributing the Nets’ first nine points.

Overall, the entire first half was a masterpiece for Brooklyn. The Nets led 65-49 at halftime, and all of their players who checked in by that point had scored.

Scoring 118 points in a contest is not unusual for a team that has done so three other times this season (and reached the 100-point mark in all but two games), but it was a “historical” feat against the Jazz. The 118 points were the most the Nets have scored against Utah in a game since December 23, 1986.

There is no doubt that Spencer Dinwiddie was the player of the game, and his incredible performance uplifted a Nets team that was without Russell. Dinwiddie’s high-caliber play this season, for the most part, has been one of the Nets’ best-kept secrets. His role as a starter (four games out of 14 thus far) has been a result of Brooklyn’s many injuries, and two of those games have been particularly impressive. Friday night, included.

The Mayor finished with 25 points on 9-of-14 shooting from the field and 6-of-10 shooting from downtown. He also notched five rebounds, eight assists and zero turnovers. This stat lined earned him the honor of the first player in franchise history to record at least 25 points, six three-pointers and eight assists with no turnovers in a contest. The Nets sure found a keeper and another G League gem in Dinwiddie.

Dinwiddie’s numbers were not the only notable moments from the game; he had plenty of highlight reels to go along with them. There was the ridiculous near-halfcourt heave to close out the first half:

Dinwiddie drains the buzzer beater to send the @BrooklynNets to the half up, 65-49, over the @utahjazz.

Oh, and this pretty crossover that he wanted to be @’d in…

Up to Friday’s contest, Timofey Mozgov had served as Brooklyn’s starting center for all of the Nets’ games. He has been far from impressive though and has hardly garnered much playing time. The 7-footer is only averaging five points and 4.4 rebounds in 14.9 minutes per game.

Without starting Mozgov, the Nets opted for a lineup of Spencer Dinwiddie, Allen Crabbe, Rondae Hollis-Jefferson, DeMarre Carroll and Trevor Booker. The smaller Booker getting an edge over Mozgov shows that Head Coach Kenny Atkinson has recognized Mozgov’s lack of significance and is experimenting with his beloved small ball as a result.

That is interesting because Brooklyn’s shortage of bigs has been a constant concern. The Nets’ only three centers are Mozgov, Tyler Zeller and Jarrett Allen. Zeller was the only one out of the three who played on Friday night; Mozgov and Allen were the two players on the roster who got DNPs. Allen had returned in Tuesday’s loss to the Celtics after missing six games with a left foot injury though, so it should not be long — especially with Mozgov playing (or not playing) in a lesser role — before he gets even more court action.

The Organ at the Barclays Center

I am no expert on music, but comments about the Barclays Center’s organ were a common theme I have seen all week. Here are a couple of Nets (and organ) experts’ takes on this:

The organ needs to go. ASAP.

At least, with the positive way the game went, the organ could be viewed as one of the biggest concerns on Friday night.