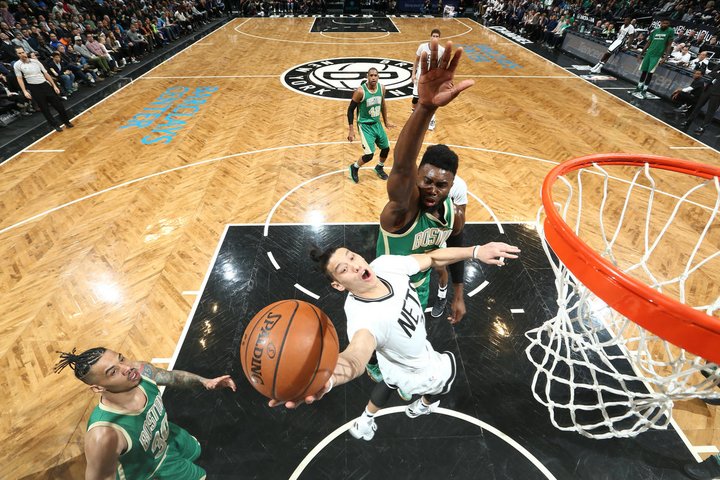 BROOKLYN, NY - MARCH 17: Jeremy Lin #7 of the Brooklyn Nets goes up for a shot during a game against the Boston Celtics on March 17, 2017 at Barclays Center in Brooklyn, New York. NOTE TO USER: User expressly acknowledges and agrees that, by downloading and/or using this photograph, user is consenting to the terms and conditions of the Getty Images License Agreement. Mandatory Copyright Notice: Copyright 2017 NBAE (Photo by Nathaniel S. Butler/NBAE via Getty Images)
Home
Brooklyn Nets
Charles Maniego

Last night, the Brooklyn Nets faced the Boston Celtics in a St. Patrick’s Day matchup. After an exciting win against the Knicks on Thursday, the Nets were trying to notch their second straight win for the first time all season. Boston played without Isaiah Thomas, the heart and soul of the team. Whether he’s an MVP candidate or not, that’s up to you. That left Jeremy Lin to face Marcus Smart, a less offensively talented, but far tougher defender.

Compared to other Nets games this season, Friday’s game was a low scoring affair. But it was also a gritty, hard-fought game on both sides. Both teams may not have scored over 100 points, but there was a fair share of drama, especially late in the game. Brooklyn continued to fight back, even when they found themselves in a deficit. They may have struggled from the three-point line early, but they competed. It was a heartbreaking loss, but also a nice effort for the Nets. They’ll look to bounce back on Sunday afternoon, playing the Dallas Mavericks at 12 PM at home.

After a strong performance on Thursday night in Madison Square Garden against the Knicks, Lin struggled with ball control in the first half. While he did assist on two baskets in the first half (including a vicious Rondae Hollis-Jefferson dunk), Lin committed three turnovers when trying to push the pace for early offense. But Lin turned it around in the third quarter, burying a clutch three to give the Nets the lead after being in a deficit for most of the first half.

Lin only played three minutes in the fourth quarter. He was originally slated to come back in with six minutes left in the half, but there were no dead balls or timeouts to sub him in. He stood and watched his teammates at the scorers’ table for over three minutes of game time. It may have been minor, but that may have been a deciding factor in the game. But when he was subbed, in he had some pretty big moments. Lin’s sub in helped the Nets keep up with the surging Celtics.

But there was a controversial foul call late in the fourth. Lin and Marcus Smart were tangled up, fighting for a rebound off of a Boston miss. Lin fell to the ground, and took Smart down with him. The two were tangled up, and unfortunately, Lin was called for the loose ball foul. That gave Smart two free throws, which extended the Boston lead.

Lin did recover, scoring on a nifty turnaround to tie the game up late. However, Boston was just too tough for the Nets to keep up with. Lin finished with 10 points, 6 assists, and 7 rebounds in only 21 minutes of play.

The First Half was Ice Cold

The Nets shot 3-of-18 from three-point land in the first half. Quincy Acy missed four good looking three point shots, for example. Neither team shot over 36% from the field in the first two quarters, with a stretch where both teams missed eight consecutive baskets. Both teams struggled to get into a rhythm offensively, missing decent looks. Some people call it a drought. At halftime, the score was 45-37, with both teams expected to score less than 100 points.

Both K.J. McDaniels and Andrew Nicholson saw extended minutes against the Celtics. Both trade deadline acquisitions showed some flashes of their skills. McDaniels was aggressive on drives and on defense, chipping in 6 points and grabbing four rebounds. He played over Rondae Hollis-Jefferson in the second half. Nicholson showed some nifty post moves and shot some perimeter shots, nailing a crowd-rousing three point shot to start off the fourth quarter.

Together, the two did a solid job, combining for 17 points on 7-of-16 shooting. Nicholson played 17 minutes and McDaniels played 19. It was a promising game for both of them, who have struggled to find a niche in their first few weeks wearing Nets black and white.

All game, the Nets were bothered by the Celtics’ physicality. The toughness of every Celtics player really frustrated Brooklyn’s players. Jae Crowder, Avery Bradley, and Marcus Smart led the charge with their effort on both ends of the court. Isaiah Whitehead was successful at getting to the rim, but he was unable to finish, picking up rough (but apparently legal) bumps and contact in the paint.

On offense, the Celtics were led by Jae Crowder, who poured in an efficient 24 points, with 12 rebounds to boot. Al Horford may not have outplayed Brook Lopez, but he did chip in with timely buckets, finishing with 16 points.

Spencer Dinwiddie struggled with Boston’s roughness as well, going 1-of-5 from the field, missing some decent looks from inside the arc. Even Rondae Hollis-Jefferson, coming off of (arguably) his best game of the season struggled on the defensive end, with Al Horford and Amir Johnson to bulky and too physical on the interior for the lankier RHJ to keep up with. Even without Isaiah Thomas, the Celtics were a tough team to beat.

The Nets will play Yogi Ferrell, Dirk Nowitzki and the Dallas Mavericks on Sunday afternoon. They will look to bounce back from the tough loss against the Celtics against a team looking to make a run at the playoffs. Brooklyn lost their last match-up against Dallas last Friday, 105-96.