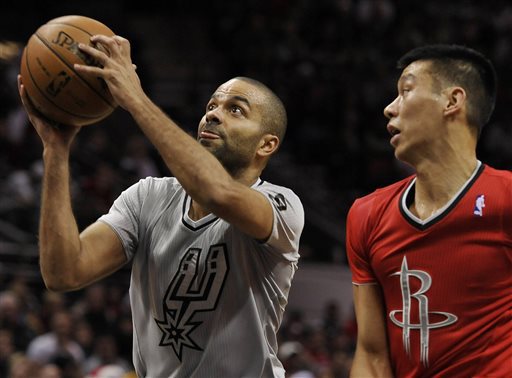 Jeremy Lin: Like Tony Parker and The Spurs Way

As a Brooklyn Nets fan and a huge Jeremy Lin follower, it goes without saying that I am very excited to see what he could do as a starter after being a bench player for the majority of the last 3 seasons with the Houston Rockets, L.A. Lakers, and Charlotte Hornets. It was clearly time for Lin in free agency to find a coach and a new environment where he could have a better chance of success and the ball started rolling when Kenny Atkinson was hired as the new head coach of the Nets. Under Kenny Atkinson who is a disciple of Mike D’Antoni and Mike Budenholzer, I think the style of play will focus more on Pick and Rolls for the Point Guard and feature ball movement like the Spurs and the Hawks. It is no secret that General Manager Sean Marks with his Spurs background along with the rest of the organization would like to emulate them for their team play and the great success they have had over many years.

When you think about the Spurs, Tim Duncan obviously comes to mind as a first ballot hall of famer but a great part of their success was due to an underrated as well as under-appreciated PG and that is Tony Parker. Lin has similarities in his game to Parker in that they are both quick and driving to the basket is their core strength as point guards. Actually Parker has compared Lin’s game to himself and this is his quote to the Houston Chronicle on 12/10/12: “His shot will come,” Parker said. “I couldn’t hit a shot at the beginning of my career. I was still able to go to the basket. His shot will improve and it will definitely help his game. When I started making the outside jumper on a consistent basis, that’s when I was more consistent with my performance.”

Lin then answered with his comments to the Houston Chronicle on the same day that he considers Parker as a role model in terms of his basketball ability. Lin said “Just creating space, changing directions, using angles, floaters, his creativity in the lane. I think he’s an elite point guard and someone I want to aspire to be in terms of how he leads his team to how he pushes the ball and makes plays.”  I would like to point out that Lin scored his career high 38 points for the Rockets in Houston against the Spurs after the article was published on 12/10/12. Parker certainly got to see Lin at his best firsthand that night.

Jeremy Lin is coming off a good overall season with the Hornets but he had the worst shooting year of his career not counting his first year with the Golden State Warriors. His field goal percentage was only 41.2% and his perimeter shooting declined from previous seasons. Lin is a player who has always had a great work ethic and he recently made a public statement that he is working to improve his outside game. He acknowledged that he needs to improve his jump shooting to take his game to another level and he said that it is his number one priority in the summer. Lin also stated that he has changed his shooting motion again to make his jumper more consistent and use less energy with a lower release point so he could become more efficient. He practiced shooting jump shots with a quicker release for last season but it was obviously not effective.

According to Basketball Reference.com, Lin shot 33.1% from 16 feet to the 3 point line and 33.6% from 3 which is down from his career high of 36.9% with the Lakers 2 seasons ago. For his career, he’s shooting 37.5% from 16 <3 and 34.6% from 3 so Lin regressed with his outside shooting last season. In comparison, Tony Parker has improved his perimeter game as he has gotten older and for the last 4 seasons, he has been steady and efficient in shooting from 16 <3 as well as the 3. From 16 <3, he has shot over 40% from 16 <3 over his last 4 years and in 3 of those seasons, his percentage has been .459, .457, and .455. He is not known as a good 3 point shooter and he rarely shoots 3’s but he has improved his shooting percentage to over 35% over the last 4 seasons and over 40% in the last 2. Along with his improved outside shooting, Parker is still elite in driving to the basket and a part of his game that I would like Lin to emulate is the floater. From 3-10 feet, Parker makes 46% of his shot attempts in his career whereas Lin shoots 36.2%. Having an improved floater could save some wear and tear on Lin’s body because he takes hard fouls going all the way to the basket and especially as he becomes older and less athletic.

Despite his shooting struggles last season, Lin was a much better offensive player when he was a spot starter for 13 games. In 34.4 minutes as a starter, his FG % was 46.1% and he shot the 3 at 46% while averaging 17.5 points. In 24.6 minutes off the bench, Lin’s FG % was just 39.8% and he only shot 30% from 3 while scoring 10.6 points.  I am optimistic that his jump shot will improve with increased minutes as the starting Point Guard for the Nets and he will play a much bigger role as the primary ball handler and one of the top options offensively. Lin will now be able to get into a flow and rhythm which is important for a shooter and he should become more consistent with his jump shot. Along with increased minutes as a starter, he will attempt more shots which will add to his scoring. Lin has averaged 9.2 shots per game for 11.7 points in his career and both numbers should go up considerably this season.  I think he will average around 12-14 shots per game this season as 1 of the top scoring options on the team and it is possible that Lin could average around 16-17 points.

In regards to pace, the Nets were a slow half court team for the most part last season and I feel that Lin’s ability to push the ball in transition a la (OK that’s French) Tony Parker will definitely make a difference for the team and himself.  He will give other players easier baskets with the way he could put pressure on the defense and players like Bojan Bogdanovic and Sean Kilpatrick could spot up for open 3’s the way Steve Novak used to do for the Knicks especially during Linsanity. Lin should also do well with athletic finishers on the break such as Trevor Booker and Rondae Hollis Jefferson. In addition, it is likely that he will have the freedom to drive to the basket for a shot or take up a pull-up jumper in transition without looking over his shoulder at the head coach now that he is the starter.

As someone who has followed Lin closely since his time with the Knicks, I feel that he does not get enough credit for being a good playmaker by fans and national media around the league. I feel that this is largely due to the limited opportunities that he has had to run the team really since his days with the Knicks. No doubt we will see a lot a Brook-Lin Pick and Rolls which is a strength in Lin’s game that has been underutilized since his time with the Knicks. Lin made it very clear that he wants to challenge himself to see what he could do in a starting role and we should now see the best of Lin with both passing as well as scoring. I think a season average of 17 points and 7 assists is possible with his increased role. His play will create excitement for the fans and add wins to the team that desperately needs him to step up as one of their core players. Nets have a long way to go as a team that is rebuilding but I couldn’t be more hyped to see the transition the team makes with Lin leading the way at PG.

Jeremy Lin will attempt to form his own identity once the season starts and it would be great if he could become an integral part to the team success the way Tony Parker has for many years with the Spurs.  Also individually, Lin knows that his game will be under a microscope as a starting point guard now and I think he understands that he needs to improve in all facets of the game.  It is clear to see that both Sean Marks and Kenny Atkinson have a goal of rebuilding the right way and I believe that Lin is the guy for the job.  Lin is a person of high character and he is a team player who could teach the young guys to play the right way.  The plan is to have sustainable success and Spurs East sounds perfectly fine with me.