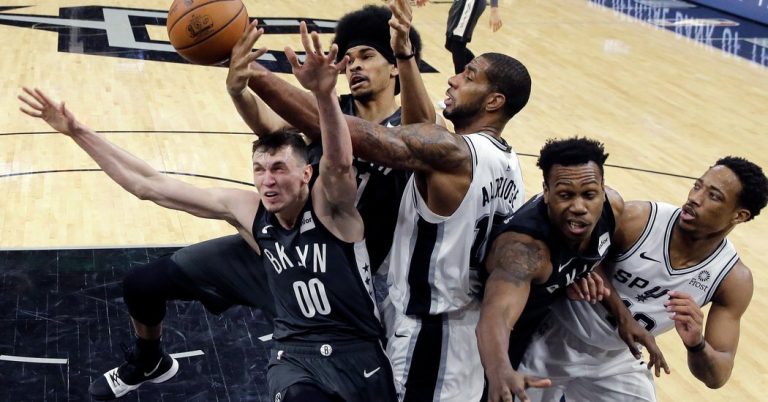 After a clutch win over Charlotte the Nets look to continue their winning ways as they head back home to Brooklyn. San Antonio will be a motivated foe after their upset loss to the dwindling Knicks. Here’s a look at the important factors to watch for.

After getting the DNP against Portland, Rodions Kurucs was re-inserted off the bench against Charlotte. Rondae Hollis-Jefferson and Jared Dudley replaced him as the two to miss out on court time in the win over the Hornets. Caris LeVert put it best when describing the game-by-game fight for minutes.

“It’s tough. When you have a good team everybody has to sacrifice for the good of the team. We have a lot of guys who are willing to do that. Anybody on any given night could not play, or have a huge night, and we’ll need them down the stretch.”

Nick and I also predicted that Atkinson’s 10-man rotation against Charlotte is likely to be the one going forward until Spencer Dinwiddie returns. How Coach Kenny continues to dole out his minutes will be a key in not only the San Antonio game, but for the rest of the season.

Zone defense has been an integral part of Brooklyn’s marked improvement on the defensive end. At times it’s been hit and miss due to lapses in communication and a failure by players to rotate at appropriate times. Expect it to be utilised again off made baskets as Atkinson pointed out in their previous matchup with the Spurs late last month.

“Off makes, we’re in zone. We missed and they ran out and that’s kind of how they got downhill on us. I do think that zone was effective after makes. It kept them in front of us a little bit. They move around, they’re fast, they drive the ball.”

As Kenny iterated it’ll also be crucial that they defend the paint adequately. Jarrett Allen has found some form and the return of LeVert has helped their defense on the perimeter as well. As always, defense will be as important as nailing shots on the offensive end.

In 33 games where the Nets have shot 35% or more from the perimeter, they’ve gone 18-15. It’s certainly not an outstanding record but a solid one nonetheless. With Allen Crabbe back they’ve added another threat from the three-point line that increases their proficiency from the area. Oh, and they have Joe Harris.

The Spurs notoriously don’t shoot a heap of threes. They do take and make the right shots. How they defend and force the right shots will be as important as making threes of their own.

If the Nets can replicate what their crosstown rivals did defensively it’ll go a long way to getting the win, as Coach Popovich remarked following their loss to the Knicks.

“It was a pathetic performance defensively. But the Knicks had something to do with it. They were physical, they did a good job.”

Make your shots and staying engaged physically on either end will help Brooklyn get the result they want.