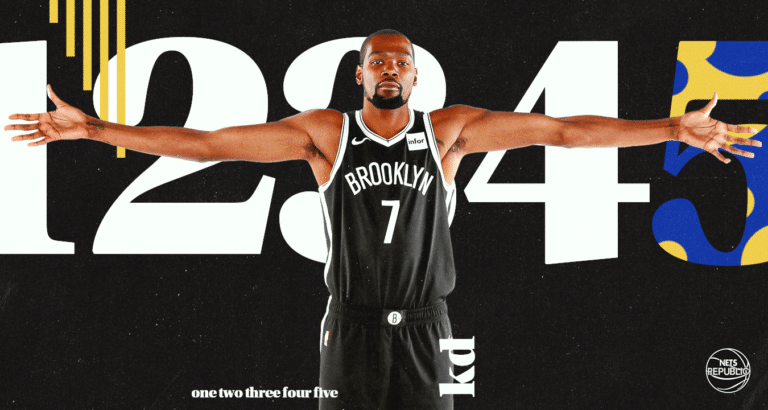 When Steve Nash was hired as coach of the Brooklyn Nets, a prominent talking point among NBA pundits was his lack of coaching experience. It’s true; Nash has never found himself on an NBA bench as a coach. Yes, he coached Team Canada in international play briefly, but there isn’t much to go off of there. In most introductory press conferences, coaches––like Nash––rarely give away their schemes, instead opting for cliché terms like “defensive identity” and “strong culture”.

Consequently, one quote stuck out to me in particular from Nash’s media sessions recently. On the Old Man and The Three Podcast, hosted by JJ Redick, Nash mentioned that Kevin Durant — Brooklyn’s 2019 superstar acquisition — can play “all five positions”. For some, “KD at point guard” was their immediate reaction, but I’m more curious about the other side of that spectrum: the center position.

Durant has limited experience playing the five, seeing as he logged only 5% of his offensive possessions as a center during his 2018-19 campaign, and 7% the previous season. This shouldn’t be an issue, however, since his potential workload at center would only be in short spurts at the end of games or in the playoffs.

Before all else, let’s examine his physical stature, and whether or not he can match up with 7-footers around the league. Despite being listed at 6-foot-9 for much of his career, it’s well-known that Durant’s true height is closer to 7 feet; when combined with his high release point, he should be able to shoot over any “traditional” big.

Defensively, Durant has always been a good rim protector, and he ascended to elite levels in Golden State––100th percentile in BLK%––using his long frame and timing to swat shots. A nimble, guard-like player his entire career, Durant would be able to switch onto perimeter players with ease and use his length and lateral quickness to negate any “mismatch”.

On the offensive end of the floor, every one of Durant’s extraordinary strengths will be amplified with a favorable matchup. His exceptional three-point shooting will draw his defender out of the paint and offer a driving lane to teammates like Kyrie Irving, Caris LeVert, or Spencer Dinwiddie. If the other team down-sizes to match Durant’s speed, they’ll have to sacrifice size.

Since the NBA started tracking offensive data back in 2017-2018, KD’s three-point percentage and field-goal percentage have seen significant increases when slotted at the five. Typically a 39% shooter from deep, his accuracy jumps up to 45% at the center position. His FG% is 57% at center, compared to only 51% overall during that same span, according to NBA Stats.

All of this sounds great in theory, but how good are the numbers if results aren’t seen on the court? Let’s examine some game film:

Here, the Cavaliers run a 1-5 screen and roll, and Durant switches onto the ball-handler, Kyrie Irving. KD angles his feet to force Irving middle and Irving obliges, attempting to beat Durant with his speed. As a counter, Durant shadows the nimble Irving all the way to the rim, using his 7-foot-5 wingspan to contest Irving’s layup attempt.

Durant’s impact in the clip above might not be obvious at first, but it’s important to note how his defender reacts in a loose ball situation. As the offensive rebound is collected, Kevin Love-–Cleveland’s center––begins to drift towards the paint –– the instinct of many “traditional” big men. Durant is able to take advantage of Love’s mistake and spot up for an open triple, though it clangs off the back-rim. Still, that’s a good, open shot. With a larger sample, those deep attempts will start to fall.

At first, this clip seems to mirror the first one almost perfectly; Durant is switched onto (now-Net teammate) Kyrie Irving in a pick-and-roll, and he controls the drive and forces a miss with a contest. Don’t worry, the fun doesn’t stop there. Watch the Cavaliers defenders in transition, keying-in on Richard Jefferson in particular. Amid the confusion, Cavs guard Kyle Korver asks for help with Shaun Livingston at the rim and Klay Thompson on the wing. Jefferson is in position to rotate onto Thompson and help his teammate out, but Durant’s gravity trailing the play sucks him in, leaving Livingston open under the rim.

Here, KD grabs a rebound and swiftly pushes the pace up the floor, excellently illustrating the value of being the tallest player on the floor while also handling the ball like a guard. A slower Kevin Love isn’t able to keep up and is forced to foul.

Evidently, playing Durant at the center position in pinches would allow him to maximize his strengths and punish the weaknesses of his opponent, while not giving up much on the other end.