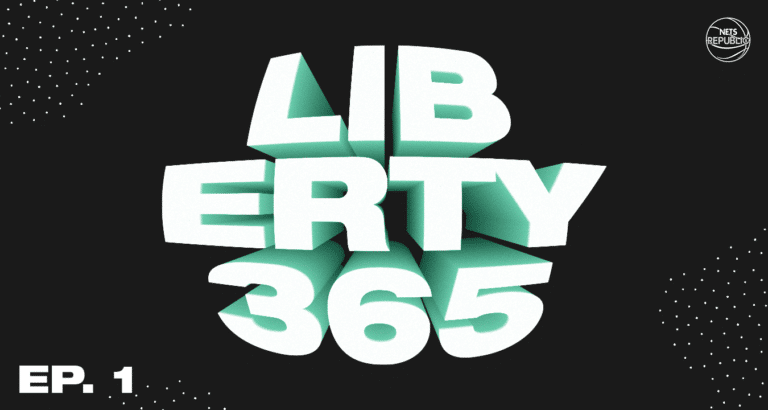 The 2020 Wubble season is in the rearview. We’re about three weeks removed from the Seattle Storm hoisting the trophy, and it’s been nearly a month and a half since the New York Liberty took the court. There has been scarce information available about next year’s 25th WNBA season (including a frustrating lack of communication concerning the draft lottery):

But, still, there’s basketball happening. According to Winsidr’s super helpful Overseas Tracker—which you should all bookmark immediately, if you haven’t already—the New York Liberty have 10 players participating overseas (though, as you’ll see below, I have mentioned a few more). Most franchises see at least a handful of players sign contracts in Europe and Asia during the offseason, though those contracts are sometimes in flux.

The aim of this new series, Liberty 365, is to keep you informed about what’s going on throughout the year, and not just in the months our team takes the court around the United States. Let’s spin the globe and see what’s going on with our favorite Liberty players over in the Eastern Hemisphere.

Stop me if you’ve heard this before—and if you’ve read my work long enough, you have. Rebecca Allen is the prototype for Walt Hopkins’ five-out offense. For me, being robbed of Allen’s leap forward this season was the second largest bummer this past season (topped only by Sabrina Ionescu’s injury). Before COVID-19 flipped everything on its head, Allen was in line for huge minutes with New York, especially with her ability to play—and strongly defend—multiple positions. Back in March, she was named MVP for Poland’s Arka Gdynia.

Rebecca Allen is currently playing for Valencia Basket in Spain, and she hasn’t missed a beat. As of this writing, Valencia (7-0) is one of two undefeated teams in the Spanish League, having just knocked off previously unbeaten Girona 68-58. Allen’s 13.6 points per game (PPG) lead the team, but her three-point prowess is where she truly separates, and this is what should excite Liberty fans in need of a refresher. Allen is 16/33 from beyond the arc, and that 48.5% soars well above the team’s 33.6% average. In fact, the rest of the roster combined has made just 20 triples, or four more than Allen by herself. She’s also managing 54.8% from two, while posting a tie for second on the team in steals (1.4 steals per game [SPG]) and leading the way in blocks (1.1 blocks per game [BPG]).

According to the Libs Abroad page, which contains great passport visuals and some statistics, Asia Durr is spending her offseason playing for BLMA. Their roster, however, does not confirm this. My social media sleuthing didn’t offer up any more clues, either. Even without Durr, though, this team does have lots of W talent in Julie Allemand (Indiana Fever), 2020 Most Improved Myisha Hines-Allen (Washington Mystics), and Cheyenne Parker (Chicago Sky). If and when Asia Durr surfaces, I’ll be sure to update you all!

*Note: Our own Wlohaty, who is much closer to this Eurobasket action than we are, believes Durr is scheduled to join BLMA in January.

The Israeli league tips off its season on November 30, so there’s nothing in the way of stats so far. However, there will be some WNBA talent on both sides of this opening matchup with Ramat Hasharon, as Joyner Holmes, Davis, and Gillespie square up with Alaina Coates (Washington Mystics), Jackie Young (Las Vegas Aces), and Jennie Simms (formerly with Washington [2nd round draft pick, 2017] and Indiana Fever [2017]). We’ll be sure to update you again once this season gets underway.

No, I’m not just putting the “Can a NYL article get written without talking about Sabrina?” question to the test here. There’s some actual potential here, I promise!

We haven’t heard too much from Ionescu since she went down with a Grade 3 ankle sprain back on July 31 in a game against the Atlanta Dream. Once she left to rehab outside of the bubble, she dropped off media availabilities for the remainder of the regular season.

She did, however, have an exit interview at the conclusion of the playoffs, answering questions from national media. Lots of great info came from that, including this nugget via ESPN’s Mechelle Voepel:

“Ionescu said that if she goes overseas, it would not be until later in that season, like in January or February, and that Europe is her most likely destination.

‘I wouldn’t really be going for the money,’ Ionescu said. ‘I’d be going for a couple months to kind of just get back into playing basketball, playing against other players. It’s really easy to just go through workouts [alone], and it’s completely different to play 5-on-5 with refs.

‘There’s a few [overseas] teams that I was talking to before the WNBA season started. So I’ll still be talking to them and see if I can go out there later.’”

If Ionescu decides to make the trip to Europe, we’ll be sure to let you know.

From what I could figure out with the aid of Google Translate, Lyon has had its share of issues with COVID-19 positive tests. The team has yet to take the court, though some in the French League have played as many as five games already. The Lionesses expected to take the court back on October 24, but their opponent, Charleville-Mézières had virus concerns of its own. Their new (new) opener is now scheduled for October 28, but we’ll see what happens!

So, unfortunately, no big highlight-reel no-look bounce passes from MJ23, but hopefully there will be more to talk about the next time we check in on Lyon. In the meantime, I’ll leave you with my single favorite Liberty highlight of 2019.

Also, Lyon finally played, dropping their belated opener to Bourges, 74-62. Each of the eight Lyon players that took the floor gave the ball away at least twice, with the team fumbling its way to 23 turnovers. Johannès struggled to an eight-point, four-assist line, with a team-high five turnovers.

Like Johannès (and maybe Durr?), Jones is wintering in France. Through five games, the team is just 1-4, one of the few teams rostering Liberty players to find themselves struggling in the standings. The First Team All-Rookie guard is going through struggles of her own: although her 10.7 PPG make Jaz one of just three players averaging double digits, she’s shooting just 11/35 from the field (31.4%). Her aggressive style of play is not translating well early, as her 3.7 rebounds per game (RPG) are matched by 3.7 fouls per game (FPG). Still, it’s early for her, as she’s played in just three of the teams first five contests. Hopefully Jones turns it around soon.

Like Holmes and Jocelyn Willoughby, Paris Kea is playing in the Israeli league that starts up next month. Four of this team’s five starters are Americans: Kea, Brewer, Courtney Boylan (Michigan ‘12), and Teana Muldrow (West Virginia ‘18, drafted by Seattle in the 3rd Rd).

Kea made the most of her court time after joining the Liberty midway through the season, earning her way into significant starting minutes by the end of the year. The only thing that can keep Kea from getting her shots up is, well, no basketball.

Fenerbahce Spor Kulubu Istanbul boasts one of the largest concentrations of WNBA talent outside of Russia’s UMMC Ekaterinburg superteam. At 6-0, Fenerbahce is the lone undefeated team in Turkey. After playing in the first game, Stokes missed three matches before returning for the last two. Thus far, she’s averaging 7.0 PPG and 7.7 RPG, shooting 50% from the floor, though she’s just one of four from deep. As is the case with all these players to this point, this is a tiny sample size, but she leads the stacked team in both SPG (2.0) and BPG (1.3). Maybe she can talk free agent Kayla McBride into making the move to Brooklyn next season; the roster may be wing-heavy, but could definitely use some more shooting and perimeter defense.

Sopron, off to a 3-0 start, has not played since October 14. The Hungarian League is dealing with positive coronavirus tests of its own, forcing quarantine and rescheduling. The team hopes to resume its schedule on October 24. In her three games thus far, Walker has adapted well to Eurobasket play. She is second on the team in scoring at 13.0 PPG, shooting especially well inside the arc (8/11 [72.7%] from 2, 6/17 [35.3%] from 3). The team scores a hefty 90.0 PPG, and Walker is one of six players to average double figures. Gabby Williams is the only other WNBA player on the team to hit that double-digit mark in the early going.

Joce Willoughby is our third Liberty player participating in the Israeli league. Again, still a month out here. She’s slated to start alongside the other two Americans on the roster, Kaila Charles and Tal Sahar, who finished her career at UC Santa Barbara in 2019.

*Note: Willoughby’s most recent post on Instagram, dated October 27, shows her dropping a ballot off in front of New Jersey’s East Orange City Hall, so she’s still stateside as of now. If you haven’t yet, get out there and vote!

Han Xu has been coming on strong lately for the Magic Deer (7-2). In her latest contest, she scored 29 points on 13/17 shooting, while notching four blocks (and an extremely questionable single rebound, but we’ll let that slide.) Just last week, Han went off for a career high in scoring:

Han is dominating the team in counting statistics as well. She leads the team in scoring (18.2 PPG), rebounding (7.1 RPG), and blocks (2.1 BPG). She’s hit 67.6% from two, though she’s just a discouraging 1/11 from three — her range is an area where she could really be improving her stock in the eyes of New York’s coaching staff.

Our last stop on the world tour brings us to Russia, where we check in on our big impending free agent, Amanda Zahui B. This is the league of the aforementioned unstoppable UMMC, so AZB will have her work cut out for her. Her team, however, is competitive in its own right. And it’s very, very deep. Only Arike is seeing serious court time (30.0 minutes per game [MPG]), but the next 10 players on the roster fall into the 17-24 minute range. Thus far, Dynamo Kursk’s 3-0 record leads the Russian League, but four teams have yet to take an L.

In her 18 MPG, Zahui is dropping 7.7 PPG and snatching down 4.7 RPG. Her long range shot is still a little jetlagged, as she’s just 3/10 from beyond the line, but 6/8 within it. As we all know well, she’s capable of a big shooting night to get all her percentages back to where she wants them.

Thanks for joining our trip around the world, following our Liberty. I’ll check back in soon with some more overseas updates to keep you in the loop with New York Liberty content 365 days a year.