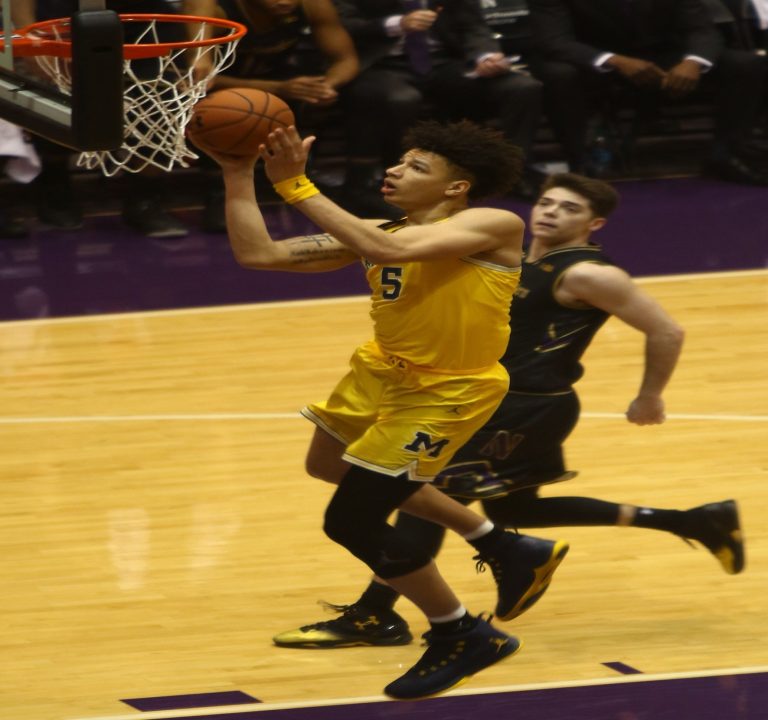 D.J. Wilson does not have much of a track record of success. The redshirt sophomore played fewer than ten minutes per game in both his injury-shortened true freshman year and his redshirt freshman season in 2015-16. However, Wilson broke out during his sophomore campaign and shone in a larger role, including a stellar tournament for the Wolverines where he averaged 16.0 points per game with 42.9 percent shooting from deep and three blocks per game. His shooting touch, ball handling ability, and defensive upside make him a great fit for Brooklyn’s bench. DraftExpress’ most recent mock draft has Wilson as the 27th pick.He would be a solid choice for the Nets at that point in the draft if he is still on the board.

D.J. Wilson was not always a big man, and that shows in his guard-like offensive game. Wilson spent much of his high school days as a wing. He finished high school as the 159th best player in his class according to the RSCI rankings.

Wilson did not flourish during his first two years as a Michigan Wolverine either. Wilson played 24 minutes in five games as a true freshman before an injury led to him redshirting the rest of the year. D.J.’s situation did not change much during his redshirt freshman campaign either, as he averaged just 6.1 minutes per game.

Everything seemed to click for Wilson in his third year at Michigan. Once he finally managed to snag a starting role, he took full advantage of the additional minutes. Wilson only averaged 11.0 points per game, but he did so with an absurdly efficient True Shooting Percentage of 62.8 percent. Wilson also showed some long-range ability, canning 37.3 percent of his triples. He also showed up when the pressure mounted; some of his best games of the season came during the NCAA tournament.

D.J. Wilson is exactly the type of high-upside player that would be worth a gamble for the Nets late in the first round. While he does not have a more sustained history of success beyond his solid 2016-17 campaign, his offensive skill set and defensive potential give him a decently high floor and a sky-high ceiling that outstrip his late first-round pedigree.

D.J. Wilson’s slow maturation process is evident in his offensive game. Wilson is 6’9″ and sports a 7’3″ wingspan, but he plays like he has never seen a post-up. His smooth jump shot and guard-like handle have translated from his high school days spent playing on the wing.

Wilson showed three-point range this past season at Michigan. However, his shot is more versatile than that of the typical big man. Wilson is a solid catch-and-shoot player, but he can also shoot off the dribble. While he is not a high-usage offensive player, Wilson has enough of an in-between game that he can be effective when forced to play inside the arc.

In addition to his potential as a stretch big man, Wilson has a knack for slipping through seams in opposing defenses. He seems to instinctually know when to cut to the basket:

Wilson’s basket cuts may be an even more important part of his offense at the NBA level than his shooting from deep. The sample size of his college career is not large enough to declare that he will be solid from deep right away in the NBA (although his 83 percent shooting from the free throw line is a good sign). However, Wilson’s ability to read defenses for easy basket cuts and his athletic tools will allow him to score on backdoor plays immediately as a pro.

D.J. Wilson is a great fit for the Brook Lopez–Jeremy Lin pick and roll that will (hopefully) dominate the Nets’ offense next season. He can space the floor to the three-point line. He can also slip to the rim for dunks when defenses over-commit to either Lopez or Lin. Both of those skills would allow him to be effective as an offensive role player from Day One in Brooklyn.

D.J. Wilson’s guard-like agility and coordination are certainly helpful on the offensive end. However, that body control will be even more useful on the defensive end. Wilson has the size and speed to be a premier pick and roll destroyer and the perfect complement to Brook Lopez down low.

Wilson’s weak-side shot blocking is already solid. He averaged 1.5 blocks per game during the 2016-17 season, including this game-saver in the Big Ten tournament versus Purdue:

While Wilson’s shot-blocking skill will be useful at the next level, his true defensive potential lies in his ability to cover the pick and roll. Wilson is somewhat skinny for a big man, but he has the size to switch onto nearly anyone in the post. He also has the lateral quickness to keep up with nearly any guard on the perimeter.

Wilson’s defensive instincts are not yet up to par, and he occasionally gets lost on that end of the floor. However, his frame and athletic tools make him a nearly perfect fit in any switch-heavy lineup. With Caris LeVert and Rondae Hollis-Jefferson already in the fold, the Nets could capably switch nearly any matchup from 2 to 4. That alone would be a serious boon to a defense that struggled mightily for almost all of the 2016-17 season.

Although D.J. Wilson is nearly a perfect fit for the modern NBA, there are some concerns on both ends of the floor that might limit his overall value.

The biggest knock on D.J. Wilson’s offensive game is his lack of passing instincts. Wilson managed just 58 assists for his entire college career. While his lack of heavy offensive involvement limited those numbers, Wilson’s eye for passing is certainly well behind his eye for reading defenses to create his own looks.

On the other end of the floor, Wilson is too skinny to effectively man the middle as a center. His skill set on both ends would work wonders as a small-ball 5, but his frame makes him more of a combo forward than a combo big man. He is ineffective when guarding anyone down low, and would be bulldozed by any number of bench centers at the next level. Wilson also tends to hunt for blocks over maintaining good defensive positioning. Although that hurt his defensive play in college, it will hurt even more at the next level–especially if Wilson hopes to be an effective pick and roll defender.

Wilson’s lack of size also shows on the glass, where he gets manhandled on the boards. He averaged just 5.3 rebounds per game in more than 30 minutes per game. While his lack of rebounding ability would be an issue for any team, that issue would be magnified on the Nets. Brook Lopez might be decent at boxing out to help his teammates get rebounds, but the Nets would get killed on the glass with both Lopez and D.J. Wilson on the court.

D.J. Wilson’s growth in his lone starting season at Michigan indicates that he still has a lot of room to grow. Unlike most big man prospects, Wilson did not play down low until college. While that stunted his rebounding instincts and his ability to roam the paint on defense, it also allowed him to develop his varied offensive skill set and ability to defend on the perimeter.

Given Rondae Hollis-Jefferson’s success at power forward last season, D.J. Wilson would probably not be a starter in Brooklyn. However, Wilson’s shooting touch and perimeter-focused game would make him an intriguing fit alongside RHJ. While shifting the starting lineup around would be a risky move given Caris LeVert and Rondae’s success as a forward tandem, the weak spot in that starting lineup was at shooting guard–LeVert’s position during his own college days as a Wolverine. The young trio would be hard to beat on defense, and their offensive skill sets also fit together quite nicely.

D.J. Wilson will probably not be ready to start at the NBA level right away. Additionally, his small sample size of high-level success and inability to bang in the paint mean that he may top out as a mid-rotation big man.

However, Wilson’s skill set and high potential upside make him a great fit for the Nets with either of their two first-round picks. If Wilson is available for the Nets with the 27th pick as DraftExpress predicts, he could be the missing puzzle piece for a Brooklyn starting lineup that was already wildly successful down the stretch of the 2016-17 season.