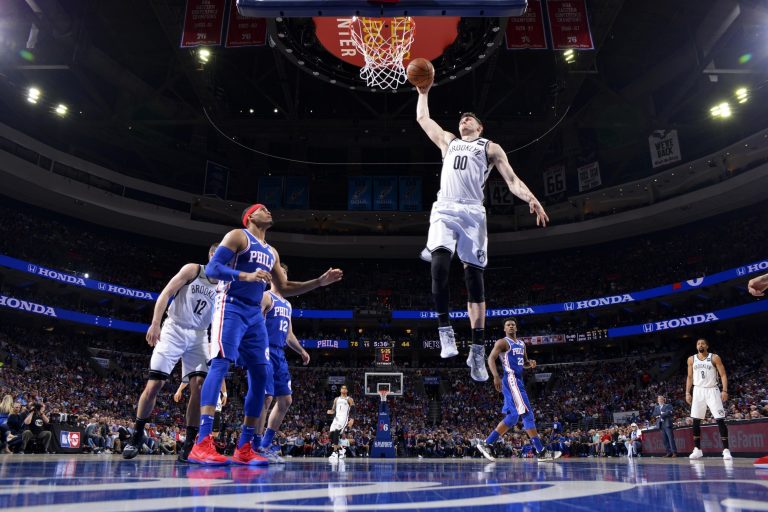 PHILADELPHIA, PA - April 23: Rodions Kurucs #00 of the Brooklyn Nets dunks the ball against the Philadelphia 76ers during Round One Game Five of the 2019 NBA Playoffs on April 23, 2019 at the Wells Fargo Center in Philadelphia, Pennsylvania NOTE TO USER: User expressly acknowledges and agrees that, by downloading and/or using this Photograph, user is consenting to the terms and conditions of the Getty Images License Agreement. Mandatory Copyright Notice: Copyright 2019 NBAE (Photo by Jesse D. Garrabrant/NBAE via Getty Images)
Home
Brooklyn Nets
Justin Carter

Well, the Brooklyn Nets’ return to the NBA Playoffs has ended after a 122-100 loss to the Philadelphia 76ers in Game 5 of their first round series. The Sixers move on to face the Toronto Raptors in the second round, while the Nets head home with a lot of things — both good and bad — to think about this offseason.

No, this wasn’t the playoff series Brooklyn wanted, and we’ll have a more in-depth breakdown of the series as a whole coming up in the next few days, but for now let’s talk about what happened on Tuesday night in Philadelphia.

The Nets Made The Playoffs!

Sure, this isn’t a game-specific thing, but the Brooklyn Nets were a playoff team this year despite no one outside of the Brooklyn fandom having them pegged as postseason contenders before the season started. Even if this game didn’t go well, this season was a success.

Kurucs didn’t play in Game 4. He didn’t play in the first half of Game 5. But the Nets, flailing and heading toward the loss, gave Kurucs come second-half run and he responded by hitting some threes, playing with a lot of energy, and reminding Nets fans why he was getting so much hype earlier in the season. Kurucs had 10 points on 3-for-4 shooting in the third quarter.

This was a good playoff series for LeVert and for people who think LeVert is this team’s most important player moving forward. Game 5 wasn’t his best night, but he still scored 18 points on 6-for-12 shooting and was the only Nets starter to finish in double figures. LeVert kept his energy up in this one and showed why he’s going to be a huge piece for this team moving forward.

I mean, look — down 3-1 against a really good Sixers team is never the place you want to be in, so you’ve got to take some victories in the small things since your hopes of getting that ultimate victory (the series win) aren’t great.

Well, the Nets can take the way Philadelphia responded to Jared Dudley on Tuesday as a small victory. Dudley got under Philadelphia’s skin in this series, leading to loud boos anytime Dudley touched the ball. Dudley didn’t score a point on Tuesday, but he annoyed a lot of people, which is something? (Look, this game was rough, so I’m reaching a little here.)

Well, the Nets didn’t score their first points of the game until 6:08 to go in the first quarter. By the three minute mark, it was 25-3 Sixers. I’m not sure a team could have gotten off to a worst start than the Nets did on Tuesday night, especially in a game as important as this one. Brooklyn found a little something near the end of the quarter to get things closer, going into the second quarter down 32-15, but you just can’t start a playoff game off as bad as the Nets did.

This was not a good series for D’Angelo Russell and this game in particular was a rough one. Russell scored just eight points on 3-for-16 shooting and just didn’t look like the D’Angelo Russell that the Nets have gotten used to having. His shots weren’t falling, he wasn’t making the passes we’ve seen him make…it just wasn’t

This isn’t the way Russell wants to end this season with his restricted free agency coming up, which is a whole other topic that we’ll also be touching on in the offseason. What will Brooklyn do with him? Will he be a Net next season?

There are not a lot of positives to take from Tuesday’s game. The Nets were overmatched from the start and it became clear by the halfway point of the first quarter that this series wasn’t going much longer.

I singled out Russell, but the whole starting lineup struggled. Jarrett Allen couldn’t contain Joel Embiid and we were reminded again of how much this team missed having Ed Davis available. Davis getting injured probably wasn’t the turning point of the series, but this team really missed his interior presence. Joe Harris hit a three, but he was still just 1-for-5 from deep; his lack of shooting in this series was another part of this team’s struggles.

Whatever That Fight At The End Was

Down 27 with 1:50 to play, Rodions Kurucs and Dzanan Musa were ejected after a confrontation with Jonah Bolden and Greg Monroe. Probably not the right time to be showing that kind of fight.

The Nets season has ended. They’ll have a Summer ahead of them that’s going to be really, really interesting as they try to navigate the free agency market. Can the Nets sign a max player? What will this team look like next season?

We’ll still be here at Nets Republic to help make sense of the offseason. We’ll also be covering the New York Liberty, because basketball never ends.