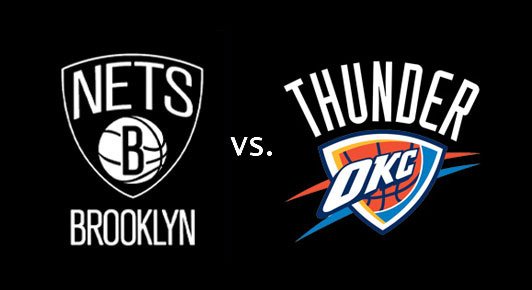 This will be one of the tougher games all season for Brooklyn, especially with the absence of Jeremy Lin. Russell Westbrook has been an absolute animal this season without Kevin Durant by his side. Flying free, Westbrook has pretty much single-handedly carried this team so far. Victor Oladipo has helped, but Russ is putting up insane numbers.

Without Lin, there is a mismatch in the back court. If Brooklyn was smart, they would put the stingy RHJ on him to try to get him out of whack. Even then, Westbrook will make some insane dimes to Oladipo and Adams or just about anyone else on the team. Westbrook really is a one-man team right now.

Steven Adams is a solid big man, but Brook Lopez can and should outplay him. If Lopez can rebound the ball the way he did against the Lakers, Brooklyn will have a much easier night. The Thunder cannot get second-chance points as they will almost always capitalize on them. Brooklyn needs to force bad shots, rebound the ball, and have good shot selection.

Brooklyn shot over 40 three-pointers against the Lakers, which is outrageous; we are not the Warriors. Brook Lopez has found a deep stroke, but he needs to learn when to use it to his advantage. If he takes every shot he gets from long range, teams will know to play him tight. If he puts the ball on the floor and passes it away or posts up his man, it will leave teams on edge.

The main key to this game for Brooklyn really comes down to, if you could not guess, stopping Russell Westbrook. Oladipo is a good player, but he cannot carry a team. Force the ball out of Westbrook’s hands. On the offense end of the floor, Brooklyn must move the ball around and find the best available shot each time. Use Kilpatrick and RHJ to slash in the paint. Use Bojan and his newfound #ForeignFacial skills. Use Brook Lopez in all aspects. Wait for good shots, make the extra pass, and try to get to the foul line.

Brooklyn allowed the Lakers to take over 40 free-throws the other night, which is unacceptable. Brooklyn needs to play tight defense, but they also have to be careful to not commit fouls, especially silly and light ones. If you are going to foul down low, make sure the shot does not get off and able to make it into the basket.

Shot selection and stopping Westbrook is the key to the game. If they can do that, there is a chance Brooklyn can get another west coast swing win without their star Jeremy Lin. The Thunder have lost their fair share of games showing us all that they are beatable via their 7-5 record. Now Brooklyn needs to go in to OKC and show them that they will not back down. Brooklyn could win this game if the #BrooklynGrit shows up the way we all know it could.