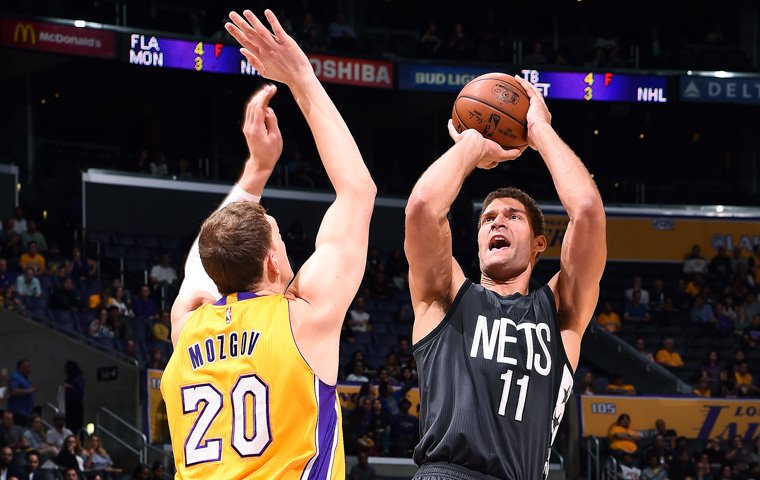 LOS ANGELES, CA -NOVEMBER 15: Brook Lopez #11 of the Brooklyn Nets shoots the ball during the game against the Los Angeles Lakers on November 15, 2016 at STAPLES Center in Los Angeles, California. NOTE TO USER: User expressly acknowledges and agrees that, by downloading and/or using this Photograph, user is consenting to the terms and conditions of the Getty Images License Agreement. Mandatory Copyright Notice: Copyright 2016 NBAE (Photo by Andrew D. Bernstein/NBAE via Getty Images)
Home
Brooklyn Nets
Nicholas LeTourneau

The Staples Center was no safe haven for the Brooklyn Nets during this Western Conference road trip. They dropped the second game in as many nights, this time against the Los Angeles Lakers in a 118-125 loss. In yet another hard fought and encouraging game, the Nets were in this game and made the Lakers earn it. Behind a triple-double from Julius Randle and 32 points from D’Angelo Russell, the Lakers pulled away in the second half.

Brooklyn saw surprisingly good games from both Bojan Bogdanovic, who had been struggling since the Jeremy Lin injury, and Brook Lopez, who has only pulled down double-digit rebounds one other time this season. Trevor Booker had a very Trevor Booker-esque game, finishing with a double-double, and both Yogi Ferrell and Randy Foye are looking more comfortable in the offense. Even in the loss, there are good things to take away from this game.

Lopez can cook with the best of ’em

It is easy to forget how talented and dangerous Brook Lopez is. He has been either injured or on irrelevant teams up to this point, but he has always been one of the more talented centers in the league. Tonight served as a reminder to everyone who has forgotten that Lopez can be a difference maker on a competitive team. In 31 minutes, more than he plays normally, he was able to amass 30 points, 10 rebounds, three assists, and three blocks.

He has had large scoring nights a few times this season, but he has yet to really put together a well-rounded game like this. What is incredible about the change in his game is that he is still getting good looks at the rim while also being effective from the three point line. Atkinson has essentially eliminated his midrange jumper, the most inefficient shot in basketball, and replaced it with good looking three point attempts in the flow of the offense.

Lopez does have to work on a few things, like knowing what an open three point attempt is. He doesn’t toss up Josh Smith type shots, but can still improve greatly. This is in no way a knock against him, but more acknowledging that this is still a new and raw part of his game. As the season progresses, I fully expect him to cut down on bad shots. Tonight’s game was great, but he should never be taking 11 shots from deep, especially when you take his usual minutes restriction into order. He should be taking between six and seven, at the absolute most.

Yogi should get a serious look at backup point guard

The Lin injury should serve as a reminder to every team that you are only as good as your second facilitator. When the guy who makes the offense go is out, things suffer. Tonight, things didn’t look so bad when Yogi Ferrell was manning the second unit. In 18 minutes he was able to score 11 points on three of five shooting, two of three from deep, and dished out four assists to one turnover. He and Randy Foye did a great job of moving the ball and getting it in the hands of guys like Bogdanovic and Lopez.

Yogi has spent time with the Long Island Nets but he should stay on Brooklyn’s roster for the foreseeable future. He looked more comfortable and with it than Isaiah Whitehead ever has in his time on the floor, and he is a knockdown shooter. He should thrive in Atkinson’s system and do well around guys like Sean Kilpatrick, Foye, and Justin Hamilton in the second unit. The consistent play of Kilpatrick and veteran know-how of Foye could cover up most of his weaknesses.

The only weakness that couldn’t be totally made up for is his lack of defense. Given his lack of length, even average sized point guards can shoot over him with ease. Tonight we saw guys like Russell and Jordan Clarkson thrive against Yogi and his poor defense. That will be the most important thing he can do to ensure he stays in Brooklyn.

Bojan taking more shots is good for everyone

Finally, Bogdanovic is taking as many shots as he was when Lin was in the lineup, and good things are happening! In 30 minutes played he scored 29 points on 11 of 18 shooting, pulled down three rebounds, and grabbed two steals. He is a scorer and one of the focal points of this offense, he needs to be taking between 16-20 shots a night if the team wants to succeed.

Part of his outburst was due to an almost newfound aggressiveness, but it is mostly due to the fact that some true point guards are back in the lineup and the ball was moving in a way that it hasn’t since Lin exited the lineup. Foye’s seven assists, Yogi’s four, and Whitehead’s vision all played large parts in Bogdanovic’s big night.

Games like this one will become more the norm once Lin is back. That doesn’t mean Bogdanovic will always score 29 points on 61 percent shooting from the floor, but when he takes shots good things happen. Atkinson’s system creates great looks for shooters and wing players, Bogdanovic is a go-to scorer and someone that has proven he can score in bunches.

Foye is getting comfortable in the offense

After starting the season with an injury that kept him out of six contests, Foye is getting more and more comfortable in the offense every game. He finished with five points, seven assists, and two rebounds on two of six shooting from the floor. While he didn’t light it up from the floor, he led the team in assists.

Foye is more of a scorer than facilitator, and was brought onto the roster to be a scorer, but has struggled to get his shot going. Games like this are good because it shows that he is starting to understand things. By making the right pass and finding a good look for his teammates, Foye is showing that he knows where the ball needs to go in the flow of the offense.