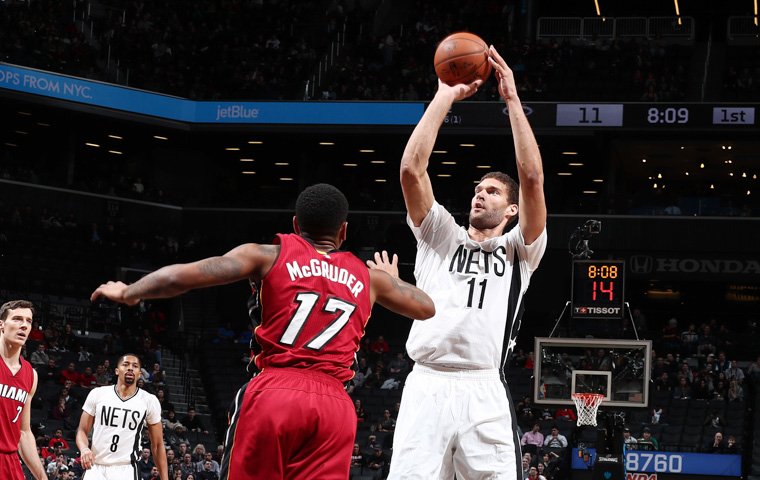 BROOKLYN, NY - FEBRUARY 10: Brook Lopez #11 of the Brooklyn Nets shoots the ball against the Miami Heat during the game on February 10, 2017 at Barclays Center in Brooklyn, New York. NOTE TO USER: User expressly acknowledges and agrees that, by downloading and or using this Photograph, user is consenting to the terms and conditions of the Getty Images License Agreement. Mandatory Copyright Notice: Copyright 2017 NBAE (Photo by Nathaniel S. Butler/NBAE via Getty Images)
Home
Brooklyn Nets
Nicholas LeTourneau

The Brooklyn Nets were 9-44 and on an 11 game losing streak entering tonight’s game versus the Miami Heat. With no Dion Waiters to play hero for the streaking Heat, it was up to Brook Lopez and company to go out and get the win. Unfortunately they came up short, falling 108-99 in Brooklyn.

Despite leading for most of the game and 30 points from Lopez, it was James Johnson and his 26 points and eight rebounds off the bench that was the catalyst for yet another Heat victory. With the Nets losing streak now at 12, there are some unfortunate patterns that are behind losses like this.

Turnovers are killing them, the defense is tissue paper most of the time, and no true point guard makes running a complicated offense challenging.

Over the past four games Brooklyn has committed 74 turnovers. Not having a true or experienced point guard is part of this, but a lot of these turnovers are just errant passes that are careless or late. In this game, the Nets committed 22 turnovers and the only players that didn’t cough it up were Justin Hamilton and Sean Kilpatrick.

Lopez, Trevor Booker, and Joe Harris had three turnovers, Caris LeVert and Bojan Bogdanovic had two, Spencer Dinwiddie and Rondae Hollis-Jefferson both had one, and Randy Foye committed four. These things add up in a hurry for this team and tend to snowball. This was the case tonight with the Heat.

Rodney McGruder and Tyler Johnson were very active on defense, combining for seven steals. All of this led to the Heat scoring 21 fast break points and was the biggest reason why momentum swung their way in second half.

Brooklyn lack of defense in games like this is almost appalling. Aside from a few incredible possessions from Caris LeVert, including one late in the fourth on Goron Dragic that was suffocating, this team really struggles playing a four quarters of defense.

Guys like Sean Kilpatrick, Bogdanovic, Foye, and Harris are all liabilities on the wing and Justin Hamilton is usually outplayed in the front court. Teams can usually drive the lane at will against the Nets and once they get into the paint, they can finish with ease when Lopez is out or away from the basket. In addition to that, only Rondae Hollis-Jefferson and LeVert defend the perimeter with any consistency. There is only so much Atkinson can do with this roster defensively, but at the end of the day this falls on him as head coach.

Point guard was the last position fans were worried about entering the season. Jeremy Lin was ready to lead the team, Greivis Vasquez was going to be the backup, and both Whitehead and Yogi Ferrell were to watch and learn. That is not how things have gone.

Hamstring injuries have sidelined Lin for most of the season, Vasquez is off the team due to an ankle injury that won’t heal, Whitehead has been forced into a larger role that he isn’t ready for, and Ferrell was cut for Dinwiddie. To add insult to injury, Ferrell signed with the Dallas Mavericks and has been enjoying a very successful run as starting point guard. The lack of point guard on the season has made running an offense like Atkinson’s more challenging and it showed tonight.

The dreaded third quarter was a prime example of this. They only scored 19 points and looked lost at times trying to initiate offense. Turnovers run rampant and instead of coming out of halftime with some edge, they come out and fail to score while Miami starts to get their comeback going. By the time the fourth quarter rolls around, the momentum has shifted entirely against Brooklyn.

Brook Lopez is incredibly talented but you can’t really rely on him to go out and score 30 points every single game. After his 30, the distribution of points is a little unsettling. Next highest is 15 points, then 10, and after that it is a string of single digits and one of four shooting from the field. An experienced point guard, like Lin, would help balance everyone’s shots and set them up for more efficient looks.

Brooklyn’s next game is against the Memphis Grizzlies at home. Jeremy Lin is shooting around and doing drills but still no word on when he will return. In addition to that, Quincy Acy is still out with an ankle injury. Hopefully the Nets will be able to dig deep and try to snap their 12 game losing streak against one of the better teams in the Western Conference.