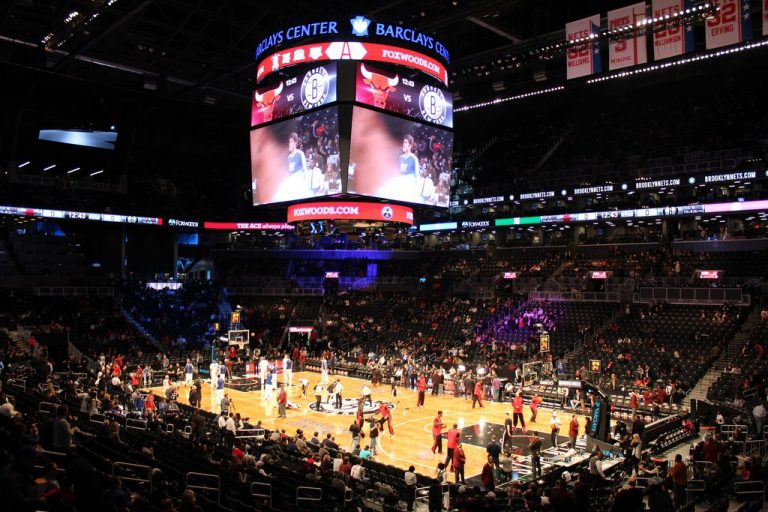 The Brooklyn Nets played host to the Chicago Bulls in their final game of the season at Barclays Center. Hoping to get to 20 wins and be playoff spoilers to the struggling Bulls.

With the possibility of missing out on a draft pick if they won (Brooklyn gets Indiana’s second round pick via the Thad Young trade if they miss the playoffs, both Chicago and Indiana are competing for the same spot in the playoffs) the Nets still went out and played their hardest in order to beat the Bulls 107-106.

Behind Brooklyn’s young core of Caris LeVert, Spencer Dinwiddie, and Rondae Hollis-Jefferson the Nets were able to pull off the upset in front of their fans at home. Brooklyn’s normal cornerstone of Brook Lopez and Jeremy Lin both struggled from the floor, but Lin found other ways to impact the game in order to get the win. Brook, who was 34 points away from tying Buck Williams‘ record, was only able to score 13 points on six of fourteen shooting from the floor in 31 minutes.

LeVert Grew Up Before Your Very Eyes

Caris LeVert played one of his best games to date against the Bulls just days after setting a career high in points scored. The rookie out of Michigan ended with 19 points, one assist, five rebounds, and one steal on seven of eleven shooting from the floor and four of seven shooting from deep in 25 minutes of action.

His scoring down the stretch proved to be one of the difference makers as the Nets mounted a fourth quarter comeback. He scored six of his 19 in the final six minutes of play, including an electrifying dunk off of a Hollis-Jefferson assist. His scoring from deep also played a role throughout the entire game as he was the only Net to hit more than two threes.

The development of LeVert’s game has been impressive to say the least. It feels like only yesterday he was making his debut in a Nets uniform, now he is giving teams that are fighting for a spot in the playoffs fourth quarter buckets. He is as important to the future of this franchise as Jeremy Lin and Brook Lopez are, maybe even the most valuable of the three given his age and ceiling.

Spencer Dinwiddie was able to put up a big performance against the team that cut him and sent him to the D-League, which must have felt great for him. He ended with 19 points, four assists, three rebounds, and two steals on six of nine shooting from the floor in 26 minutes.

This game was essentially won by Dinwiddie. With 1:36 left in the game, Jimmy Butler hit two free throws to give he Bulls a 101-98 lead. Dinwiddie then went on to score seven of the final nine points, including a three pointer to tie the game and four straight clutch free throws in order to clinch the game. If he misses one of them, Butler’s three ties the game. If he misses two, Butler wins the game for the Bulls.

The Nets revival is something that goes deeper than just Jeremy Lin, it was everyone. It was like everyone on this team got a taste for victory and started craving it. Dinwiddie is playing the best basketball of his life and looking like someone that should be on this team longterm. He offers a lot off the bench and in Kenny Atkinson’s position-less basketball scheme, he would be perfect.

Lin Struggled From The Floor But Found Other Ways To Contribute

Jeremy Lin has had a rollercoaster ride of a past few weeks when it comes to shooting from the floor. After going through a three or four game slump, it looked like he had pulled himself out of it with several efficient games and then had a season high 32 points versus the Magic. Unfortunately, his struggles returned last night against the Bulls.

Lin finished the night with 12 points on four of fourteen shooting from the floor in 28 minutes of action, but thankfully he was able to find other ways to impact the game outside of scoring. In addition to 12 points scored he dished out seven assists, pulled down six rebounds, and had three steals. He was the driving force behind keeping the offense moving while also staying active on defense. This was the type of performance he needed, especially if he was struggling from the floor.

His recent struggles can probably be blamed on a lack of conditioning due to injury. The NBA season is a long one, hence why players who are bound to play a ton of playoff minutes get rest. Lin’s time off the court was rejuvenating, but only in the sense that he was recovering from injury. All that time off the floor can slow even the most athletic players down and mess with their conditioning, Lin is no exception.

Hollis-Jefferson’s Double-Double Was Key In The Victory

Rondae Hollis-Jefferson was one of the key contributors in the win. In addition to ending with 16 points, three assists, 12 rebounds, one block, and three steals in 29 minutes he also hit two free throws with 54 seconds left in the game in order to give Brooklyn the lead.

When Jeremy Lin and Brook Lopez aren’t getting it done from the floor, the Nets need this from their young core. Hollis-Jefferson has been playing most of his time at the four since the All-Star break but he seldom has these types of rebounding performances.

If he wants to take his game to the next level this offseason, he needs to find a more reliable jumper and work on becoming a more consistent rebounder from the block. He has spent most of his career playing on the wing, so he has undoubtably had to adjust to the change in position.